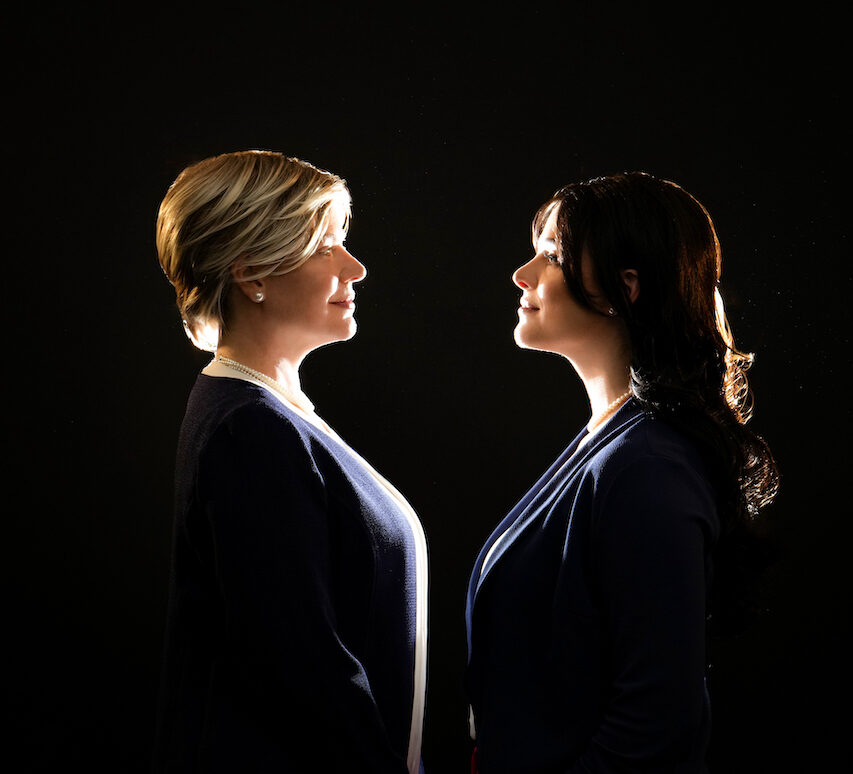 He was directing Hilary Bettis’ “Queen of Basel,” a commissioned new take on “Miss Julie” that bowed at The Colony Theatre in 2018. She was shaping her play, “No One Is Forgotten,” which premiered at New York’s Rattlestick Playwrights Theater in 2019.

The theater practitioners hit it off, and soon Hausmann was speaking with Miller about commissioning her to write a play for Miami New Drama. That play, “When Monica Met Hillary,” previews March 3-4 and opens March 5 at the company’s home in The Colony Theatre on Miami Beach’s Lincoln Road, where it will run through March 27, 2022.

The multifaceted play begins in 1995 and ends at some time in the near-future with exactly what its title implies: a decades-delayed face-off or debate between Hillary Clinton, one of the most famous and accomplished women in the United States, and Monica Lewinsky, a younger woman forever linked to a scandalous White House affair with President Bill Clinton.

Initially, Hausmann proposed a different idea to Miller for her commission: What about a play focused on the late 1995 government shutdown, a standoff between President Clinton and then-House Speaker Newt Gingrich?

“I was not interested in writing or watching a play about Bill Clinton and Newt Gingrich,” a bemused Miller says. “I told Michel I was interested in Monica Lewinsky. I had watched her TED Talk [“The Price of Shame” in 2015] and thought it was incredible. He said, ‘Sure, go ahead.’ He’s been entirely hands-off throughout the process, though the one thing he did say was that he’d like me to have what he called a commercial hit.”

“I come in with an idea, and the playwright comes in with a much better one,” he says. “This is a very powerful piece … It’s not angry. It’s not activist. It’s about extremely smart and prepared women who have had to clean up the messes the men in their lives made. It opens a window into the souls of women we think we know all too well. We start from scratch and meet them again in a new light.” 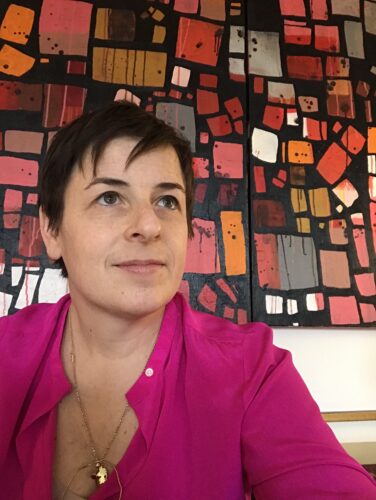 Winter Miller brought a feminist point of view to writing about the four women whose lives intersect in “When Monica Met Hillary.” (Photo/Winter Miller)

Directed by New York-based Margot Bordelon, whose major focus is on new play work, “When Monica Met Hillary” is a fast-moving, four-character play.

Miller, who (like Lewinsky) was born in 1973, was working as a New York Times news clerk in 1998 when the scandal really hit the fan and the former White House intern’s face was everywhere. Story after story broke – the Starr Report from special counsel Kenneth Starr was issued in September; the House of Representatives impeached the president in December; the Senate acquitted him in February 1999 after a monthlong trial.

“Once we were familiar with the details, it was ‘enough is enough.’ The A section was [filled] with the Starr Report, the impeachment – the prurient and puritanical took up the news cycle. I remember being pissed at Clinton because I thought it meant he wouldn’t be able to govern,” the playwright recalls.

Miller, whose best-known play is 2006’s “In Darfur,” brought a feminist point of view to writing about the four women whose lives intersect in “When Monica Met Hillary.” She did prodigious research, tracking down other interns who were at the White House during Lewinsky’s time there, creating timelines, looking for “things off the beaten path, things behind the moments we know, things we never got to see. I wanted to be a fly on the wall.”

“We have been digging deep into the text, excavating it, defining it,” director Bordelon says. “I sent Winter a list of questions about clarifying the story, the characters and the timeline.  With the actors working on it, the script has continued to evolve and change … It’s important to honor and respect these women, even though they have opposing points of view in the play.” 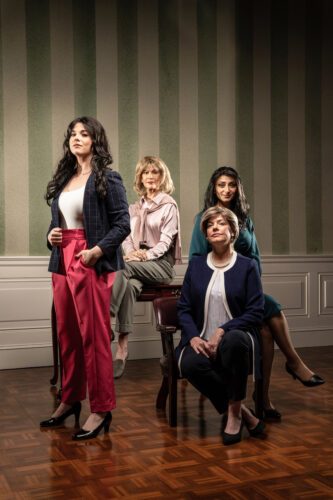 All of the actors agree that embodying women who are so well-known (Lewis excepted) involves conveying their essence, not doing an impersonation.

“There can be benefits of not trying to make a transformation into someone known by the audience,” says Skraastad, the play’s Clinton. “If you do that, the result can be impressive or unfortunate, but it distracts me from the conversation. I’m watching the actors behave.”

As for Lewinsky, she observes: “I was surprised by how important it felt to look again at that series of events, when someone who has not volunteered for a public life is catapulted into one in the most public way … She appeared to be acting out of a crush. She didn’t want to wreck a marriage or get a life in politics.”

Kennedy, the play’s Lewinsky, was born just three years prior to the affair. She has devoured all kinds of material about Lewinsky, watched the TED Talk, and come away impressed by the woman she’s playing.

“The TED Talk is inspiring. [After all this happened], she majored in psychology. She’s incredibly intelligent,” Kennedy says. “It’s been eye-opening and a gift that I was so young when it happened that I didn’t have preconceived notions.”

Zamamiri is getting married to her scientist fiancé in May and had been turning down multiple roles. But she found it impossible to resist playing Abedin in “When Monica Met Hillary.”

“This play is about four strong women doing everything in their power to succeed, but these men keep getting in the way … This is a story as old as time. Show me one powerful woman men haven’t tried to stomp down,” says Zamamiri. “What happened to Huma Abedin was a nightmare. She wanted to stay out of the public eye.”

The actor calls the Clinton-Abedin working relationship and friendship “beautiful” as captured by Miller; among the surprising-to-some facts that surface in the play is that Abedin was interning for the then-First Lady at the same time the Lewinsky-Clinton affair was happening. She thinks the play may cause some thinking about its subjects to shift.

“People are going to leave with a lot more questions and new perspectives on who Monica and Hillary were. I hope they’ll reflect on their own lives, and on injustices done to these women,” she says. 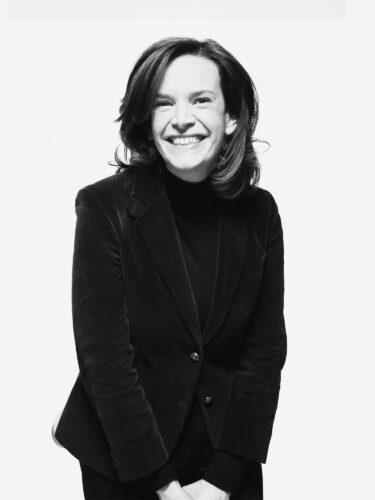 Matthews, who was part of Miami New Drama’s groundbreaking “Seven Deadly Sins” pandemic production in 2020-21, didn’t have nearly as much to go on in getting ready to play Lewinsky’s mother. Marcia Lewis participated in the 2018 documentary, “The Clinton Affair,” but she has kept a low profile since becoming her daughter’s rock, protector and confidante after the scandal broke.

Even so, “I didn’t have to find my way in,” says Matthews, who has drawn on her relationship with her two daughters while working on the play. “We’re so often cast as wives and mothers, and that’s it. These women are so powerful and multifaceted … I love the way Winter wanted to honor the truth and stick with what the truth might have been. She wasn’t villainizing or hero worshipping.”

Miller — whose children’s book, “Not a Cat: a memoir,” is expected to be published on March 22 — knew exactly what she wanted from the climactic final scene in “When Monica Met Hillary.”

“I wanted it to feel like a boxing match in which the opponents were not equally matched in terms of experience and regard,” she says. “It’s not a fair fight, but I wanted to find surprising sides of Hillary we could never imagine … For Monica, I used conjecture based on what I read or what she Tweets. She seems to be very honest about life, very grounded and intuitive, wanting to make life better for people who have been bullied.”

Kennedy sees the final scene as “a love letter or apology to Monica. It shows her as a fully formed human being. She’s debating with her past and the world via the vessel of Hillary Clinton.”

In staging the last scene, says Bordelon, “you want to craft it for maximum impact. You want people to leave with a greater respect for these women and their points of view … You never want it to skew into a cat fight. You want them to have an incredible debate.”

As for what the play could become in Miller’s eclectic career — maybe Hausmann’s vision of a much-produced hit? — the playwright is both realistic and ready.

“I write plays about things [that make] people afraid to produce them: abortions, genocide, hostage-taking,” she says. “I would like nothing more than full houses and people leaving talking about feminism.”