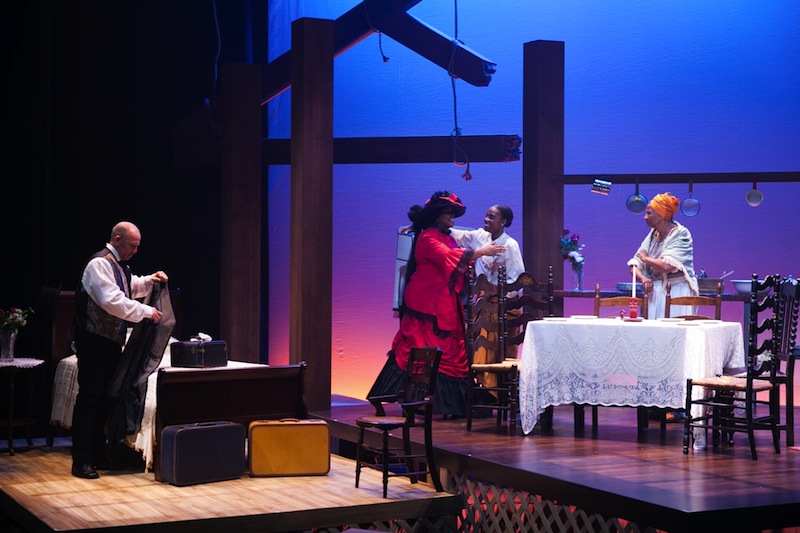 Pearl Cleage’s play “Flyin’ West,” an M Ensemble production currently on stage at the beautiful new performing arts center in Liberty City, the Sandrell Rivers Theatre, is set in humble Nicodemus, Kansas, the only remaining western town established by African Americans during the reconstruction period following the Civil War. Set in 1898, the play focuses on the lives of Sophie (Brandiss Seward) and Fannie (Candice Marie Singleton), sisters thrown together by circumstance who have migrated from Memphis, a hotbed of racism, to the open plains and promise of self-determination in Kansas.

The stalwart, gun-toting Sophie envisions Nicodemus as a town where blacks can prosper and raise families, and she’s on a campaign to convince her neighbors not to sell their land to white speculators. Fannie, who has struck up a romance with Wil (Chat Atkins) dreams of being a writer. Trouble brews when Fannie’s youngest sister, Minnie (Rita Joe) shows up with her husband Frank (Seth Ian Crawford), a mixed-race man who passes for white. Frank and Sophie clash over his mistreatment of Minnie, his apparent disdain for blacks, and his condescending attitude toward Nicodemus. The cast is rounded out by the stellar Carolyn Johnson, who plays Miss Leah, the play’s elderly matriarch who was born a slave and whose stories Fannie is eager to record in her book on the history of the people of Nicodemus.

Originally published in the mid-1990s, “Flyin’ West” remains a testament to the largely forgotten black settlements that arose after the Civil War. It also highlights the intersectionality that has always existed in the United States behind the more monolithic depictions in American history. For example, Wil has arrived at Nicodemus after living with the Seminole Indians and working in Mexico. Still, the play’s greatest achievement is that it manages to underscore the tenacity and tenderness of the lives of African-American pioneer women, without romanticizing them or ignoring their challenges. Sophie, powerfully portrayed by Seward, embodies female independence and inventiveness.

Unfortunately, “Flyin’ West” is marred by a lack of direction and inconsistent acting. Director Jerry Maple, Jr.’s direction is very slow going. Some of the courtship scenes between Fannie and Wil, for example, are unnecessarily long. The play’s first act lasts an hour and a half, and the second act runs around 40 minutes, making it tedious and lopsided. At the end of both acts several moments feel final, which undercut the play’s true crescendo.

Crawford’s portrayal of Frank, the play’s foil, is uneven. His accent careens from unconvincing cockney to erratic southern drawl. His performance feels forced, especially in the more dramatic moments. In contrast, Johnson’s Miss Leah steals the show. From her witty repartee to moving monologues, Johnson’s timing and cadence are spot on and do justice to “Flyin’ West” and its subject.

Softening some of the rougher edges is the handsome set, from Geordan Gottlieb, which is highlighted by the gorgeous, multi-colored lighting of Mitchell Ost — both of which helps take us to a time and place neglected by history.

What: “Flyin’ West” from M Ensemble