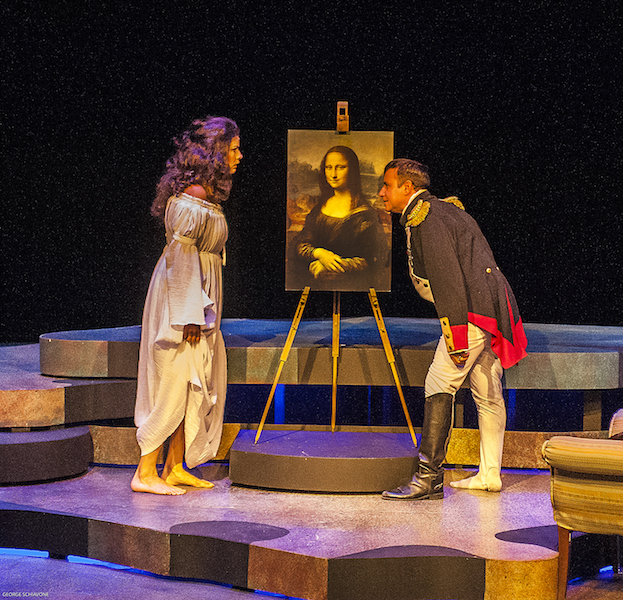 The play begins, as it must, with the velvet voice of Nat King Cole crooning “Mona Lisa.” After all, how many paintings inspire an Oscar-winning song?
For that matter, how many masterpieces survive damage, theft and the rapacious covetousness of collectors for more than half a millennium? Leonardo da Vinci’s “La Gioconda,” popularly known as the Mona Lisa, is that inspiring masterwork.
Now the world-famous painting of the silk merchant’s wife with the enigmatic smile has inspired a piece of theatrical art: Michael McKeever’s new play “Finding Mona Lisa,” currently getting a summer world premiere by Actors’ Playhouse in Coral Gables.
Fans of the South Florida-based playwright’s recent award-winning “Daniel’s Husband” and “After” will encounter a different side of McKeever in “Finding Mona Lisa.” But those who have experienced his many dramas, comedies and short plays over the past two decades won’t be surprised that art and history, among the subjects that interest him most, are at the heart of his newest work.
Structurally, “Finding Mona Lisa” departs from the straightforward storytelling of “Daniel’s Husband” and “After” for a more fluid, time-traveling approach. Rooted in research or imaginatively invented, the stories McKeever tells in “Finding Mona Lisa” have one thing uniting them: that iconic masterpiece.
A replica of the Mona Lisa rests on an easel placed center stage on Gene Seyffer’s minimalist set, a series of curving platforms in front of a black velvet curtain. As the centuries swirl around her, she remains in her quietly commanding position, fascinating and eternal.
From the outset, McKeever and director David Arisco make the play’s tone and style clear.
Stage left and in present day, Dr. Lange (Irene Adjan) delivers a crisp, authoritative lecture on the painting, its history and some of its misadventures through the ages. Stage right, in 1956, an agitated Bolivian man named Ugo Ungaza Villegas (Daniel Capote) paces and sweats, speaking of the woman in the painting as if she were a faithless lover toying with him. Neither character sees the other, but their dialogue dovetails and alternates, creating an emotional pendulum that swings from cool scientific consideration to the delusional anguish that will lead Villegas to pitch a rock at his beloved.
Actors Capote, Adjan, Anna Lise Jensen, Paul Louis, Chaz Mena and Tom Wahl play a total of 25 roles, their multiple transformations accomplished through the playwright’s character-defining writing, the actors’ vocal and physical prowess, and costume designer Ellis Tillman’s gorgeous century-hopping work (two of his designs for Adjan are breathtakingly beautiful). Eric Nelson’s painterly lighting and Shaun Mitchell’s sound design are also key to evoking the play’s multiple eras as one flows into another.
Watching these acting pros appear and reappear as wholly different human beings is a joy.
Adjan, for instance, is beguiling as Ellen, a vibrant American woman whose anniversary trip to Paris with her grumpy husband leads to an encounter worthy of a romance novel, sending her home with her own version of a Mona Lisa smile. Then she’s cool and slightly imperious as a wealthy woman circa 1911 who is willing to part with a small fortune to possess the stolen Mona Lisa.
Mena is chameleonic as a nobleman who, to his later misfortune, urges King François I to remove the Mona Lisa from one of his steam baths and display it to the masses; then as a randy Napoleon, who has the painting in his bedchamber because he can; then as Vincenzo Peruggia, a rampantly sexist Louvre Museum employee who made off with the painting in 1911.
Louis, too, is vastly different from role to role, particularly as the charming but lethal François I and then as the meek but deeply talented art forger Yves Chaudron. Besides Villegas, Capote plays Ellen’s sexy stranger, the enforcer for François I, the mastermind behind the selling of Mona Lisa forgeries and, finally, Da Vinci’s in-demand rival Michaelangelo.
Wahl and Jensen shine in two very different scenes together. The first, set in 1962, involves a back-and-forth between Kenneth, who works for the director of Washington D.C.’s National Gallery, and Colette, an incredulous Louvre employee who cannot believe that the Mona Lisa is to travel to the United States at the behest of first lady Jacqueline Kennedy.
In their second scene, the play’s last, Wahl portrays da Vinci, Jensen his subject. A normally modest Lisa Gherardini appears for her sitting heavily rouged, her hair in a snood, her lavish jewelry and ornamental scarves someone else’s idea. When painter and subject are finally alone, the two talk, and da Vinci senses Lisa’s essence. He has her remove the makeup, then lets down her hair, places her right hand over her left, takes off the scarves. Then he says something that makes her smile, ever so slightly. And voilà – there she is, the Mona Lisa.
McKeever’s writing in the play ranges from straightforward to serious to comic as he explores everything from changing attitudes toward women to the way great art inspires adoration, envy, avariciousness and more. Arisco at times pushes the performances in the comic scenes into caricature, which is overkill. And as he’s rewriting – inevitably, new plays get rewritten – McKeever would do well to excise contemporary expressions and word choices from scenes that travel back in history.
Still, for those who know only McKeever’s recent plays and for others who find the Mona Lisa mysteriously alluring, “Finding Mona Lisa” is an entertaining and enlightening way to contemplate an enduring masterpiece.
‘Finding Mona Lisa’ by Michael McKeever, Actors’ Playhouse at the Miracle Theatre, 280 Miracle Mile, Coral Gables; 8 p.m. Wednesday-Saturday, 3 p.m. Sunday (additional matinee 2 p.m. July 19), through Aug. 13. Cost: $58 Friday-Saturday, $50 other performances (10 percent senior discount, $15 student rush tickets, excludes Saturday-Sunday); 305-444-9293 or www.actorsplayhouse.org.