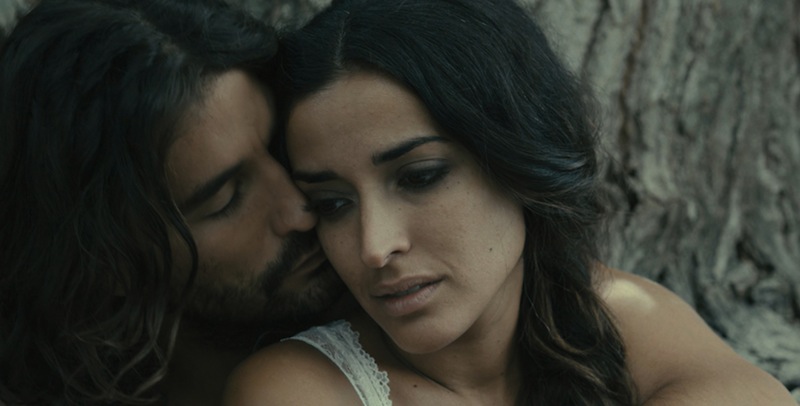 a woman who appears almost mummified in a torn and bloodied dress. After a sudden gasp for air, actress Inma Cuesta peels away the sullied layers and slowly emerges, digging her fingers into the slimy bed of mud and earth.

This moment, which isn’t part of the play, imagines the bride’s demise. Interestingly, it also foreshadows her resuscitation. She will live – if only to face the tragic outcome of her actions. Ortiz’s cinematic rendition of Lorca’s tragedy adds a fascinating dimension to the original by amplifying the world of women.

Set somewhere between the 1930s and 50s in rural Spain, la novia (Inma Cuesta) is set to marry a kind, hardworking man (Asier Etxeandia). However, lingering feelings for Leonardo (Àlex García) with whom she had a previous relationship begin to bubble to the surface, and as the wedding commences, passions and rancor erupt. There is also a dark family history at play. Decades before, Leonardo’s cousin stabbed the groom’s father to death, an act for which his mother is still profoundly bitter. Luisa Gavasa embodies the mother’s resentment with a visceral performance.

In the second scene la novia confesses to her mother-in-law that she left the wedding party with another man. “I went with the other one,” the bride utters. “You would have done the same.” This flash forward (in the play this confession comes at the end) frontloads the already foreseen tragedy with mystery and drama. It exemplifies Ortiz’s inventive script (co-written with Javier García Arredondo) and willingness to take risks.

Cuesta is arresting as la novia. Languid close-up shots of her dark searching eyes and inquisitive eyebrows reveal a complex portrait of a hopeful bride derailed by a vertiginous longing for unrequited love. Ortiz also incorporates a few key flashback scenes of the bride, the groom, and Leonardo as children and close friends, intimating that their connection has endured for decades. A scene where the three young friends innocently witness adult violence adds depth to the theme of generational rancor and retribution.

Blood Wedding, part of Lorca’s “rural trilogy,” explores nature, destiny, and the shadowy world that exists between the two. In La Novia María Alfonsa Rosso poses as a beggar, but she really embodies death and the illusive crossroads. Ortiz also incorporates magical realist elements to exemplify these themes of fate and nature. In a dance that is only briefly alluded to in the play, Ortiz fashions a carnivalesque scene where la novia spins with visions of the moon, Leonardo, and flames whirling around her. This scene also serves as the transformative moment that precedes the film’s climax. In this heady, ecstatic dancing, La novia becomes the woman who will forsake everything to follow a love that she knows will have dire consequences for all.