Famed Sex Therapist Gets the Stage To Herself in ‘Becoming Dr. Ruth’ 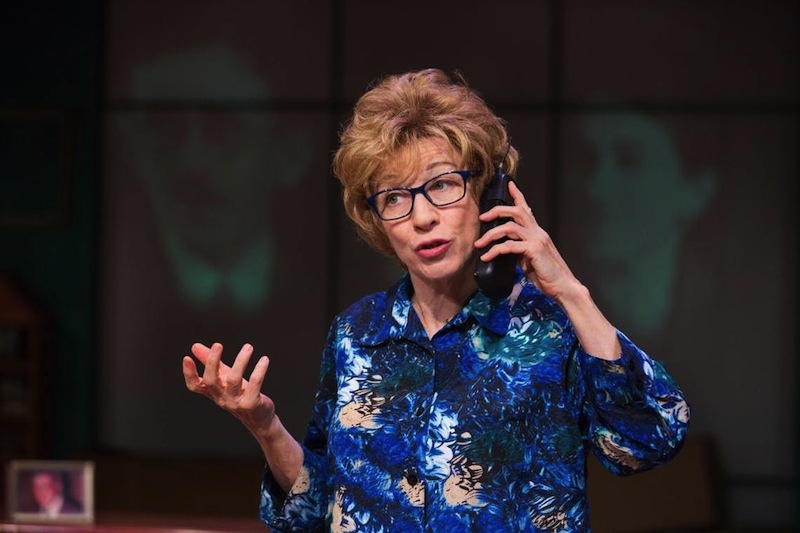 If you were to predict who might become a nationally famous – OK, world-famous – multiplatform sex therapist, Dr. Ruth Westheimer would probably not be your first choice.

Born in Germany in 1928 as Karola Ruth Siegel, the 4’7” Dr. Ruth seems more like the doting Jewish grandmother she is than a woman who used her nationally syndicated radio show, TV shows and 40-some books to help hundreds of thousands out of their sexual pickles. Nonetheless, her life story proves that one need not be tall to become mighty.

Mark St. Germain’s solo show “Becoming Dr. Ruth” has just opened GableStage’s 20th season at the Biltmore Hotel in Coral Gables. A touring production of the play featuring its Off-Broadway star visited the Parker Playhouse in 2014, and GableStage performer Anne O’Sullivan has played the role elsewhere, but this is director Joseph Adler’s fresh take on a remarkable woman’s life.

O’Sullivan is taller, slimmer and younger than the real Dr. Ruth, who will celebrate her 90th birthday in June (and who is expected at two GableStage performances this week). The actor’s speaking voice is different from Dr. Ruth’s instantly recognizable one, with its strong German accent, but O’Sullivan’s approximation works.

Over the course of the 95-minute play, set in 1997, Dr. Ruth is busily preparing to move from the three-bedroom apartment in Washington Heights where she raised her children Miriam and Joel, became famous and shared 36 happy years with her third husband, Manfred Westheimer.

Her beloved “Fred” has just passed away, and the kids are worried about their mother’s abrupt decision to leave her longtime home behind. But Dr. Ruth is nothing if not strong-willed, and she’s certainly not too swamped to regale us, her theatergoing visitors, with a life story not nearly as sunny as her demeanor.

The only child of an Orthodox Jewish couple, young Karola escaped the Nazis at age 10 when her mother sent her from Germany to a group home in Switzerland as part of the Kindertransport program. Life there had its share of cruelty as well as young love, but Karola was spared her family’s fate: All perished in the Holocaust.

Emigrating to Palestine at 17, she began using her middle name Ruth, lived on a kibbutz, had sex for the first time and became a sniper in the Zionist paramilitary Haganah. After being severely wounded during the Israeli War of Independence, she emigrated first to Paris, then to New York, where she studied sociology and education, taught at a number of colleges and universities, then turned a 15-minute late-night radio show into a brand.

As she roams around Lyle Baskin’s attractive apartment set, which is not nearly as cluttered as Dr. Ruth says it is, O’Sullivan must do the usual juggling that a solo show requires.

You know the phone will ring repeatedly, as her narrative is interrupted by short chats with the guy she calls her “minister of communications,” with a mover who has a sexual query he’d like to discuss without the other guys around, with her concerned kids and with a stranger who seemingly has ties to Dr. Ruth’s past. As she packs photos and reminisces, larger versions of them are projected onto a screen above the apartment, so we see images of everyone from her lost family to former president Bill Clinton.

Matt Corey’s music and soundscape are vital in deepening the show’s drama and emotional palette. Jeff Quinn’s lighting helps O’Sullivan journey from present to past and back again, and Ellis Tillman’s costume makes the actor look more like the woman she’s portraying. Beth Fath’s props, from the books of an academic to a collection of turtles reflecting a precious memory, speak silently of Dr. Ruth’s life.

Understand, “Becoming Dr. Ruth” is by no stretch of the imagination a great solo show on the order of “The Belle of Amherst,” “I Am My Own Wife,” “The Search for Signs of Intelligent Life in the Universe” or any number of other one-person plays a drama lover might cite. St. Germain’s writing and his focus on Dr. Ruth’s amiability soften some of the script’s potential impact.

Nonetheless, O’Sullivan and Adler deliver an engaging portrait of a woman who survived a shattered childhood to find joy in work, family and her bold embrace of sex as her special area of expertise.