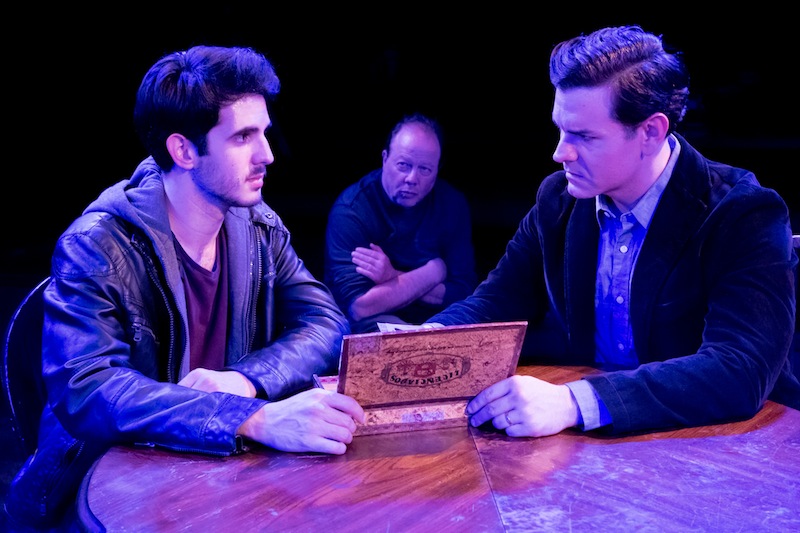 Writing about “Broken Snow,” the Ben Andron thriller now getting its world premiere at the J’s Cultural Arts Theatre (JCAT) in North Miami Beach, is a proposition almost as tricky as the play itself.

The intricately structured 90-minute drama is loaded with surprises, twists and turns, all revealed at precisely the right moment so that the play builds to its shattering conclusion. Yet as director Michael Andron, the playwright’s father, notes after the performance, sharing many details about the play ruins in-the-moment discovery for future audiences. So what’s a critic to do? Here goes the review equivalent of that Facebook practice known as vaguebooking.

Inspired by a chilling true story, “Broken Snow” centers on strangers who meet in an abandoned house.

James (Daniel Llaca) gets there first, digging through a chest and a basket as he tries to find something.He hides as he hears someone else arriving. Steven (Nicholas Richberg) is older and more obviously settled than James, but he too is seeking something. Right away, the two combative men face off, jockeying for control. Then they begin sharing bits of information about their pasts, each telling a key story as the other looks on.

A third man, Kris (Avi Hoffman), becomes the other point in a triangle that forever binds the trio together. Though he can be soothing and seemingly solicitous, Kris has a horrifying dark side as a possible sociopath who lives off the grid and exercises cruelty for reasons that seem perfectly logical to him.

That’s about as far as we can take it while remaining spoiler-free.

Staged in an intimate space at the Michael-Ann Russell Jewish Community Center not far from the Aventura Mall, “Broken Snow” is the first professional production from a community theater that has produced 59 shows over the past decade. With plans to move into a larger, under-construction space by early 2018, JCAT will offer professional, community and children’s programming going forward.

Certainly, JCAT is making a statement with its pro debut. The play is tight and well-written, the direction keeps the tension roiling, and the acting is as skillful as South Florida theater fans have come to expect from Carbonell Award winners Hoffman and Richberg, with a third impressive performance from Llaca, who just graduated from the New World School of the Arts. Hoffman utilizes his affable stage persona to great effect, so that when Kris shares a dark “fairy tale” that becomes a horror story, the impact is deeply disturbing. Richberg plays a young man’s familial trauma, an older one’s hard-won control and the shock of a discovered history with engrossing power. Llaca confidently navigates a journey from smart-mouthed hustler to a young man burnished by traumatic revelations.

There’s not much to the of-necessity simple set, but Daveed Ben-Arie’s original music, along with Brian Goldberg’s sound and lighting, help create the unsettling eeriness the play requires.

Although a father deciding to take his theater company to the next level by producing his son’s world premiere play might sound like risky nepotism, that is certainly not the case with “Broken Snow.”The script and production live up to the description of the piece:It is, indeed, a thriller.