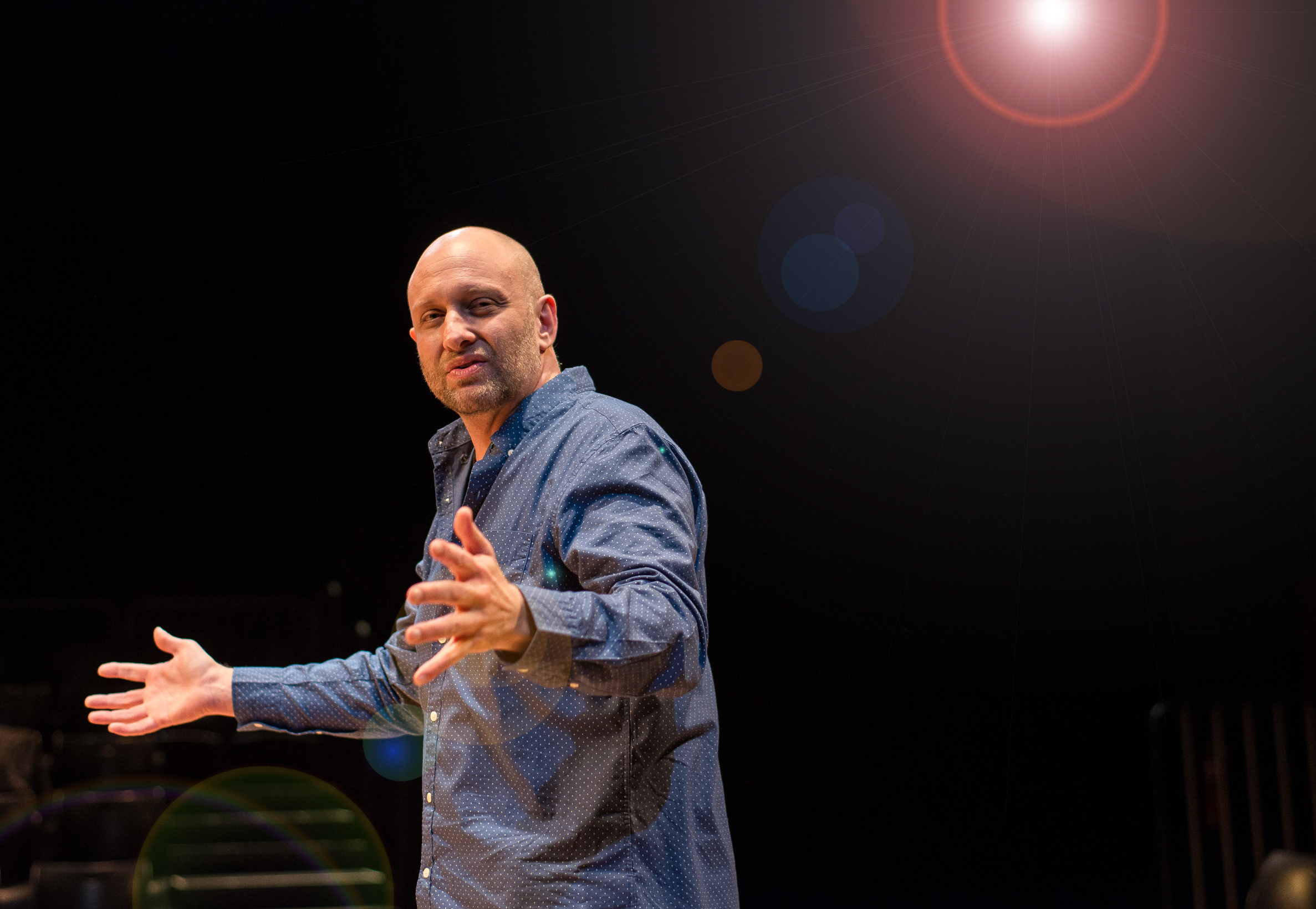 In “My Favorite Things” from “The Sound of Music,” he began: “Raindrops on roses and whiskers on kittens/Bright copper kettles and warm woolen mittens/ Brown paper packages tied up with strings/These are a few of my favorite things.”

Are you smiling yet?

A similar idea is at the heart of “Every Brilliant Thing,” a challenging interactive solo show by British playwright Duncan Macmillan and actor/comedian Jonny Donahoe.  At Miami’s Arsht Center, Carbonell Award-winning actor Gregg Weiner is making a powerful Zoetic Stage debut in a new production of the intricate 2013 play – a piece that, though anchored in sorrow, is resonantly life-affirming.

If you caught the 2016 HBO version of “Every Brilliant Thing,” you already understand the tricky mechanics of the play.

As the audience files into the Arsht Center’s Carnival Studio Theater to take seats on four sides of what looks like a shrunken, squared-off basketball court, Weiner roams the space, a stack of different colored papers in hand.

Preshow, he is “casting” the play, chatting with theatergoers to ask if they’d be willing to read out a line when he calls out the number on one of those papers, or if they’d be up for briefly playing a character – a veterinarian, the school counselor, an academic lecturer, the narrator’s dad and others. Nothing is forced. If you’d rather watch the show than participate in it, that’s cool.

It’s a given that part of the magic of live theater is that no two performances are exactly alike.  That’s true times 10 for “Every Brilliant Thing,” since Weiner’s fellow performers are an ever-changing cast of civilians.

Lots of land mines there, even if the audience members are willing to go with the actor’s flow. Some people speak too softly. Others read with little expression. Some are self-conscious, not quite at a deer-in-the-headlights level, but they come off as subdued.  But on the other hand, with some choices, everything clicks. The guy pulled from the audience to play the character’s father on opening night had a quirky, warm chemistry with Weiner, a quality that made the story of a family in slow-motion crisis all the more moving.

The underlying subject of “Every Brilliant Thing” is serious. The character’s mother suffers from depression, making her first suicide attempt when he was a boy of seven. He begins his list of the things that make life worth living as a coping mechanism, a child’s way of saying, “See? Stay here.”

The first entries include ice cream, water fights, staying up past your bedtime and being allowed to watch TV.  Later, as a teen, college student and young professional, he (and others) expand those touchstones of joy to include more complex things, experiences, ideas.  Yet his mother’s suffering – and his father’s, and his – persists.

Music is a shared passion for the family, a balm in hard emotional times. The play is derived from a Macmillan short story titled “Sleeve Notes,” referring to the artist essays on classic album sleeves and liners.  Sound designer Matt Corey threads the snippets of referenced recordings into the actor’s excited storytelling, making us understand exactly why the way Ray Charles sings the word “you” in “Drown in My Own Tears” would thrill him so.

If director Stuart Meltzer and Weiner make “Every Brilliant Thing” seem fluid and organic – and they do – it’s a testament to their artistic skills. The play is actually a scripted high-wire act with plenty of opportunities to fall.  Weiner must remain engaging, observant, sympathetic.  He has to react to what he’s given by the audience, manage it, keep the piece on track. And he does, masterfully so.

Although Macmillan’s original script contains British names, phrases and terms, Zoetic is doing it as if the character were American, excising most of those giveaway references. The exception is the references to “sleeve notes,” a more common British term than the American “liner notes.” Despite the link to the short story, it would be better to change that too.

Given the play’s overarching subject, you might think that going on its journey would be difficult. Yet, for as much as there are moments that can emotionally cut to the bone, you leave feeling that this man has given you what his mother could not receive. For a million different reasons, life is beautiful.

“Every Brilliant Thing” is a Zoetic Stage production in the Carnival Studio Theater at the Adrienne Arsht Center for the Performing Arts, 1300 Biscayne Blvd., Miami, through March 3. Performances 7:30 p.m. Wednesday-Saturday, 3 p.m. Sunday; tickets cost $50 and $55; 305-949-6722 or www.arshtcenter.org.