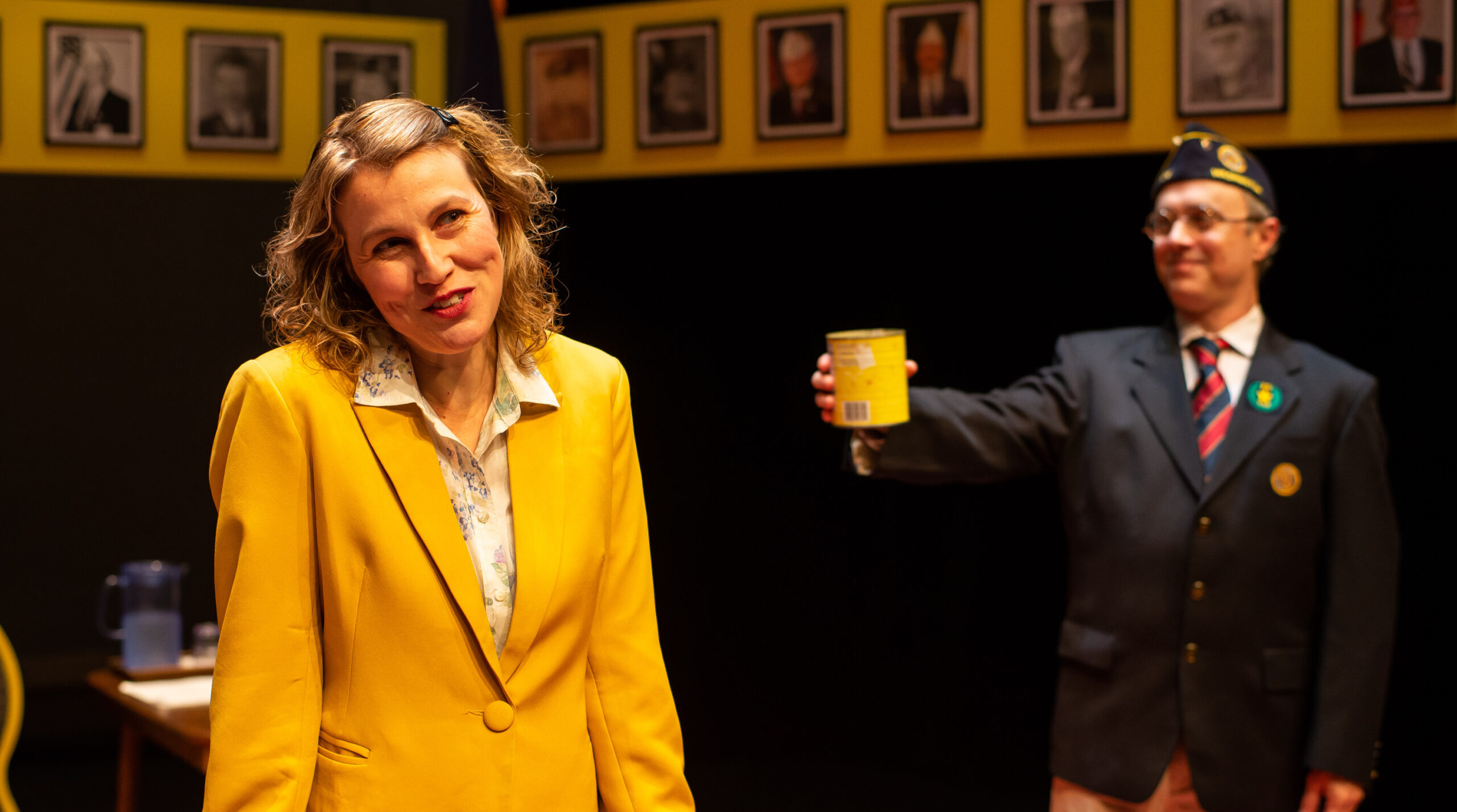 Elizabeth Price as Heidi, with Seth Trucks as the Legionnaire in City Theatre’s “What the Constitution Means to Me” inside the Carnival Studio Theater at the Adrienne Arsht Center through Dec. 18. (Photo courtesy of Justin Namon)

Elizabeth Price comes bounding into the Arsht Center’s Carnival Studio Theater happily waving, greeting the audience, smiling so hard you just know her cheeks are going to hurt (later, after so many more broad smiles, she confesses they do).

She’s wearing a mustard yellow suit jacket, and the hue – in combination with glowing lighting and golden panels sporting headshots of long-gone American Legion leaders – makes the radiant Price the embodiment of sunshine.

Portraying playwright-actor Heidi Schreck in City Theatre’s production of “What the Constitution Means to Me,” the veteran South Florida actor is giving one of those performances that makes you doubt anyone could top her or so thoroughly convey the shifting emotional facets of an impassioned artist. (Take note that understudy Melissa Almaguer will perform as Heidi at the Thursday shows Dec. 8 and Dec. 15.)

You’d be tempted to say Price is giving the performance of a lifetime if you’ve not seen her interpretative excellence on so many stages throughout the region. So whether or not her work in “Constitution” is the culmination of her decades of study and experience, it is a peak moment in her body of work.

And it is every bit as gripping and endearing as Schreck’s own 2019 Tony Award-nominated performance in the role. 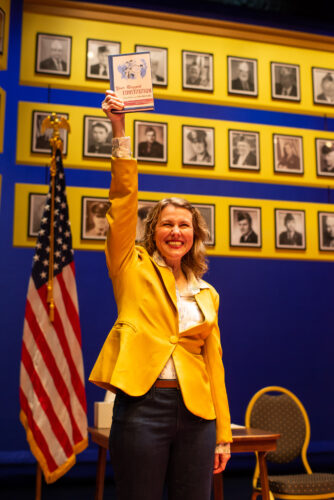 A joyous Elizabeth Price as Heidi Schreck debates the protections and flaws of the U.S. Constitution in City Theatre’s “What the Constitution Means to Me.” (Photo courtesy of Justin Namon)

Staged with a sculptor’s precision by City Theatre artistic director Margaret M. Ledford, “What the Constitution Means to Me” doesn’t fall into the classic well-made play genre.  A finalist for the Pulitzer Prize for drama, the piece operates on a number of levels – as a memory play, a trenchant comedy, an exploration of personal and familial trauma, participatory political theater that examines the strengths and deficiencies of the United States Constitution.

After a brief explanatory preamble, Price’s Heidi reverts to her 15-year-old self, a small-town girl from Wenatchee, Washington.  She is re-creating the life-changing period when she traveled the country vying for college money by participating in debates about the Constitution at various American Legion posts.  The content of those long-ago speeches, she confesses, has been pulled from her memory since her mother tossed out the originals.

After an American Legionnaire (Seth Trucks) explains the rules of the debate and starts the time clock, teen Heidi launches into an exploration of the Constitution and key amendments, personalizing the centuries-long ramifications of a document written in the late 18th century by white male landowners.

Her illustrative examples are smart, ironic, funny, and chilling.  The movie “Dirty Dancing” figures in, as does a horrifying account of the male violence and sexual abuse visited upon generations of women and children in her family. 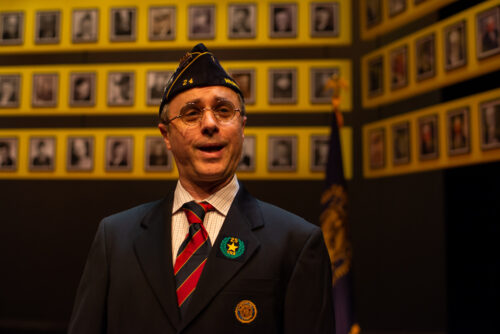 Seth Trucks as the American Legionnaire explains the rules of the debate in City Theatre’s “What the Constitution Means to Me.” (Photo courtesy of Justin Namon)

Eventually, adult Heidi sheds her blazer and teen persona to take us even more deeply into the ways a debatably flawed document touches or dictates so many facets of our lives.  Discarding that persona and using her real name, Price debates a Miami high school student (at the opening performance, Felix Varela Senior High junior Carlotta Avila did the honors) on the question of whether the Constitution should be kept or thrown out.

“What the Constitution Means to Me” is a play with multiple layers, one that calls attention to its theatrical devices, and not just in the Heidi character and the actor who plays her.

After the American Legionnaire details some of the most brutal rulings in battered women cases, Price’s Heidi notes that he’s being played by an actor named Mike (the part was originated by Mike Iveson, a New York actor who most recently appeared as Roger Stone and Bill Clinton in Miami New Drama’s world premiere of Rogelio Martinez’s “Elián”).  She says he’s there because she wanted some “positive male energy” in the play, and he seems a little rattled by that.

But then Trucks-as-Mike stands, starts talking, rids himself of his Legionnaire paraphernalia, and launches into a powerful monologue illustrating the idea that things – and people – are often quite different from what they seem to be.  Like Price, he’s wonderful.

At certain points, “Constitution” is quite interactive, with the audience encouraged to respond with applause, foot-stomping or comments.  Given the fractious state of our political engagement these days, you might expect some ugliness to surface.  That’s possible, of course, but the way the play is written, the cast’s positive energy and director Ledford’s invisible control seem to keep nastiness at bay.

The production itself is exquisitely realized. Jodi Dellaventura’s set pointedly lacks a door for entrances and exits (the reason is spelled out in the script), but it evokes a long-ago American Legion post.  Eric Nelson’s lighting encompasses the golden glow of memory, the harshness of some women’s lives, the tender promise of a better future. 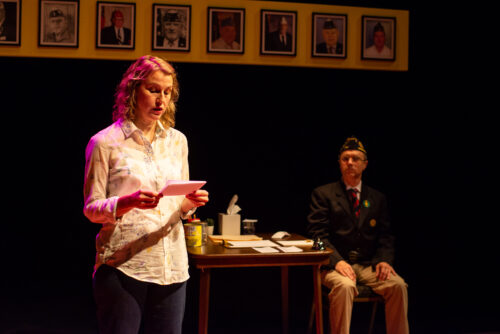 Elizabeth Price speaks about the U.S. Constitution as Seth Trucks listens in City Theatre’s “What the Constitution Means to Me” at the Arsht Center. (Photo courtesy of Justin Namon)

Among sound designer Matt Corey’s contributions are snippets of Supreme Court sessions dealing with birth control, parsing the meaning of the word “shall,” and a comment about female representation on the court from the late Justice Ruth Bader Ginsberg.  Kudos to costume designer Ellis Tillman for helping to give Price’s teen Heidi her glow and turning Trucks into a Legionnaire so classic that you wouldn’t be at all surprised to find his portrait among all the others on the set.

You will also likely feel uplifted, thanks to a skilled playwright sharing her story and to Price, whose thrilling work generates an empathetic connection that is one of theater’s greatest gifts.

WHAT: “What the Constitution Means to Me” by Heidi Schreck