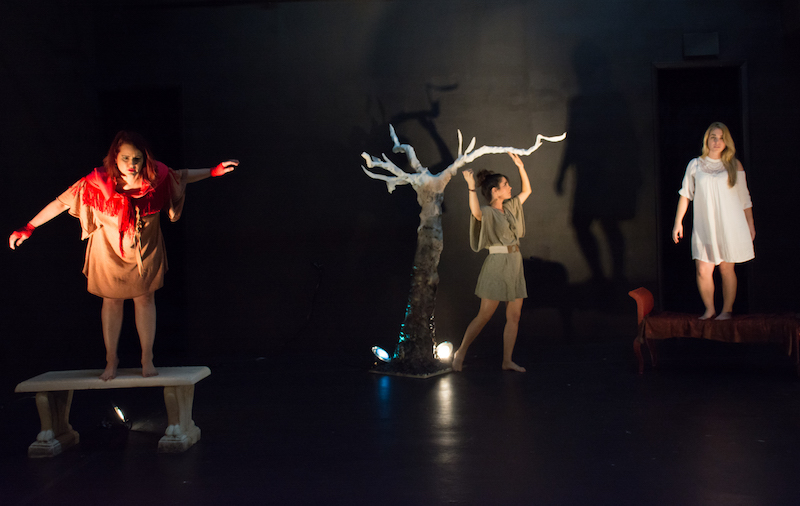 Rafael Nofal’s play “El tiempo de la mandarinas” (“Season for Tangerines”) tackles the very relevant and disturbing theme of human trafficking. Produced by Antiheroes Project, this moving play is in its last week at Artefactus Teatro, a well-purposed black box and gallery space in a smattering of warehouses in Kendall.
Nofal’s text removes overt violence and male characters from the drama. Instead the focus is on a simple stage and the lives of three women who are victims of human trafficking. “El tiempo,” which includes supertitles in English, begins with a girl (Suzette Silva) who goes to the same park every year in hopes that her friend who went missing (Romina Musach) will show up. One day the girl meets another girl (Mariela Brito), who says she’s waiting for her boyfriend. It turns out the missing girl has been abducted by the boyfriend. In effect, a flashback and a flash forward exist on the stage simultaneously. This nonlinear structure pulls viewers into a maelstrom of despair, frustration, fear as the actresses embody numerous girls who have disappeared and ultimately been forced into prostitution.
“El tiempo” director Fernando Goicochea deftly directs with a sharp instinct for the ways in which a character’s inner life is expressed through her physicality. Several movement sequences are particularly effective. According to Goicochea, these were developed through improvisation exercise in rehearsal. Dancer Niurca Marquez also served as movement coach. In one scene, the girls pose provocatively, projecting the air of women of the night. The movements are crude and a bit robotic and Brito’s body is often slouched and caved. This mélange of eroticism, fatigue, and repression is powerful and it reflects the play’s strength: the ability to reveal the multiplicity of these women. Like living matryoshka dolls, each woman contains multiple women who are childlike, naïve, oppressed, sensual, and much more.
Actors Musach, Silva, and Brito form a fluid trio of personalities – filled with rage, longing, desire, frustration, and hopelessness. The centerpiece to Rossana Montoya and Carlos Eloy Perera’s effective set design is a realistic looking tree, whose barren branches symbolize both the refuge of the park and the desolate nature of the girl’s predicament: they have been so profoundly abandoned they are emotionally unable to flee.
One of the most innovative aspects of the production is the incorporation of live music. Michael Gil Arango utilizes an eclectic array of percussion instruments such as the kalimba, gong, wooden chimes, berimbau and others, creating a haunting soundscape throughout the play.
“El tiempo” is a must see. The supertitles in English and the physicality of the performance also make it very accessible to English-speaking audiences.
“El tiempo de las mandarinas,” presented by Antiheroes Project, runs through July 30, Saturdays at 8:30 p.m. and Sundays at 6:00 p.m., at Artefactus Teatro, 12302 SW 133 Ct., Miami, tickets $20 general admission, $105 seniors and students; in Spanish with English supertitles; call 786-704-5715 or 786-975-4891 for more information.