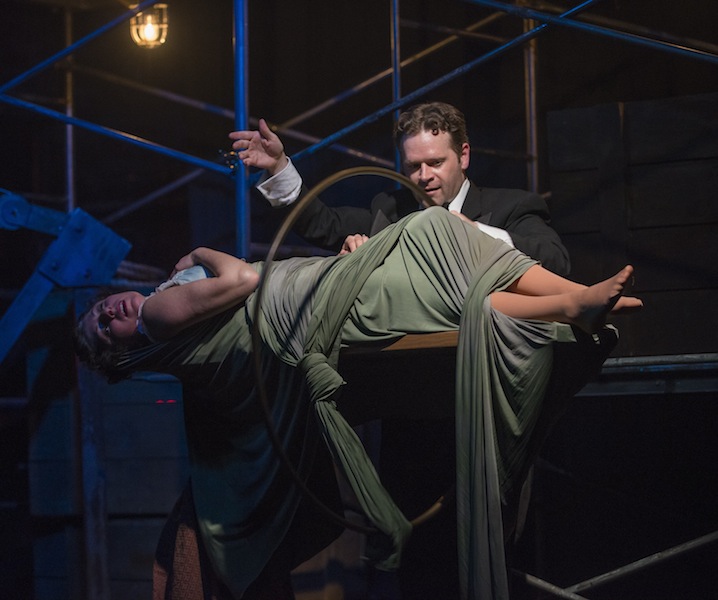 ‘Death & Harry Houdini’ Makes Another Magical Moment at ArshtDennis Watkins knows how to make an entrance.

In the House Theatre of Chicago’s “Death & Harry Houdini,” now back at the Arsht Center’s Carnival Studio Theater five years after it first wowed Miami audiences, Watkins arrives onstage with the help of theater technology unknown in Houdini’s day.

Dangling upside down from the ceiling, his torso encased in a straightjacket, the actor-magician is moved electronically along an overhead track until he is stopped centerstage. Then he wiggles and twists, and 1-2-3 he’s free. Because that’s what you do when you’re playing legendary magician and escape artist Harry Houdini.

Written and staged by House artistic director Nathan Allen, the play is a magnificent piece of theater – entrancing, mysterious, thrilling.

This is the company’s seventh annual visit to the Arsht, but there’s no return planned for next year, which is a pity. The House is a special, blazingly theatrical company. And “Death & Harry Houdini,” which launched the House on Halloween in 2001 (the 75th anniversary of Houdini’s death), is a moving and illusion-filled treasure.

Credit for the show’s ongoing success also belongs to its charismatic star. Watkins, who also starred in the House’s “The Magnificents” at the Arsht in 2014, won Chicago’s Joseph Jefferson Award in 2012 for his work on “Death & Harry Houdini.” A third-generation magician who performs his own show “The Magic Parlour” at the Palmer House Hilton in Chicago, Watkins is also a compelling actor who takes the audience on Houdini’s journey from a Hungarian-born boy named Erik Weisz who was fascinated by magic to a world-famous escape artist obsessed with cheating death.

Weaving together the facts of Houdini’s life, thematically pointed interpretation of those facts and fascinating feats of magic, Allen and Watkins conjure a show that captures Houdini’s essence – as an adoring son, complicated husband and fiercely perfectionistic artist.

One example of the company’s distinctive storytelling style from early in the play: As Erik, the boy who would become famous under his stage name Houdini; his elder brother Theo (Shawn Pfautsch), and their mother Cecilia (Marika Mashburn) look on, family patriarch Rabbi Mayer Samuel Weisz (Desmond Gray) succumbs to the cancer that has been ravaging his tongue, throat and lungs.

But instead of lying on a death “bed,” the actor reclines in a coffin-like box, his head protruding from one end and feet from the other. Two cast members then proceed to slice the man in half, seemingly separating his torso from his legs, just a few feet from those seated in the front rows on either side of the long, narrow stage. That’s how you dispatch someone in a show steeped in magic.

But the pièce de résistance, as before, is Watkins’ performance of Houdini’s famous Water Torture Cell escape. For heart-stopping drama, there is nothing quite like being locked upside down underwater in a clear vertical tank and living to tell the tale.

Watkins’ fellow performers, some of whom have long histories with the show, all have that special House multi-talent sauce, acting, singing, dancing, playing instruments and helping to execute the magic.

Choreographer Tommy Rapley, for example, does double duty as a French fraud named Hilmar and as the chilling figure of death, a top-hatted ghoul on stilts with his face concealed by an old-fashioned gas mask. Pfautsch is immensely appealing as Theo, the brother who was first to notice and take a shine to Bess, and as Houdini’s early mentor Dr. Lin. Miamian Johnny Arena is the menacing ringmaster and promoter Martin Beck, the man whose advice helped Houdini achieve worldwide fame and fortune.Mashburn’s Cecilia is an amusingly unsmiling icon to her son, a demanding monster-in-law to his wife/assistant. The radiant Gavino plays Bess with an undercurrent of the sadness that came with knowing she was third in her husband’s life, after his career and his idolized mother. Or perhaps it was mother, then career.

On opening night, after Watkins’ escape from the Water Torture Cell, a young theatergoer asked, “How did he get out, Mama?”

Audiences have experienced that sense of puzzled wonder since Houdini’s day. Now, thanks to the work of Watkins, Allen and the House, “Death & Harry Houdini” allows us to surrender to the magic one more time.