‘Dancing Lessons’ Involves One Dance Session, and a Life Lesson 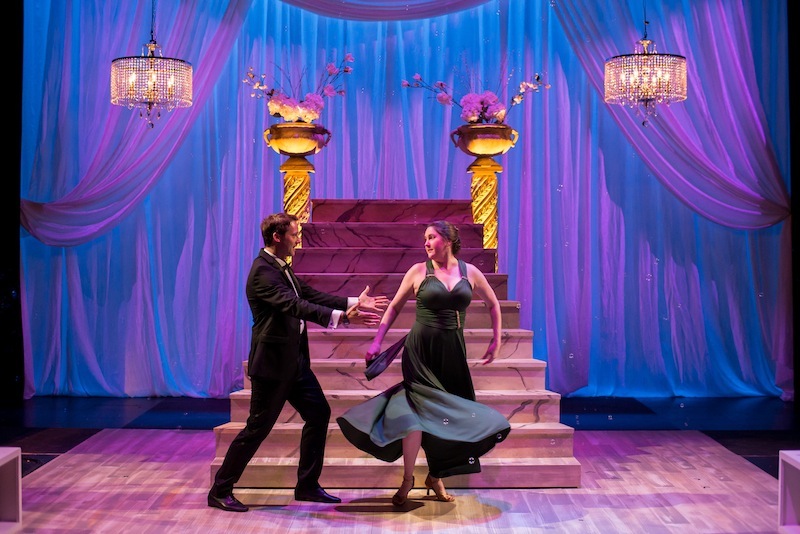 Mark St. Germain has achieved ongoing success with small-cast plays involving historical figures in fictional scenarios, and South Florida has been as welcoming to his work as the rest of the country.

St. Germain’s “Camping With Henry and Tom,” about a 1920s camping trip involving Henry Ford, Thomas Edison and President Warren G. Harding, was produced in 1996 by New Theatre in Coral Gables. “Freud’s Last Session,” imagining an encounter between Sigmund Freud and C.S. Lewis, was done at Palm Beach Dramaworks in 2010. Actors’ Playhouse in Coral Gables presented “Scott and Hem in the Garden of Allah,” which brought together F. Scott Fitzgerald and Ernest Hemingway, in 2014. And earlier this season, GableStage produced the solo show “Becoming Dr. Ruth,” about noted sex expert Dr. Ruth Westheimer.

Now another intimate St. Germain play is on a South Florida stage, though this time the two characters are fictional, and their enchanting, funny journey is completely a product of the playwright’s imagination.

“Dancing Lessons,” the third show of the season from Miami’s Zoetic Stage, does indeed involve some instructional movement encounters between an injured dancer and the neighbor who hires her to teach him how to bust a few quick moves. But St. Germain could have just as easily called his play “Life Lessons,” because that’s how the relationship of two closed-off people plays out.

Set in the Manhattan studio apartment of Senga Quinn (Lindsey Corey), who is wearing a leg brace after an encounter with a curb-jumping taxi, the play begins with a self-medicating pity party, as Senga swigs booze from the bottle. Suddenly, someone is pounding insistently on her door, yelling for her to let him in. She tries ignoring him, shouting “go away!” more than once. But at last she reluctantly lets him come in to say his piece.

The caller proves to be her neighbor from two floors above, a geoscience professor at the New York Institute of Technology. Ever Montgomery (Caleb Scott) is clearly a bright man, but it’s also clear that he is not, as he puts it, “neurotypical.”He has Asperger’s syndrome, an autism spectrum disorder, which in his case involves poor social skills, physical awkwardness, the inability to read other people and a phobia about being touched, among other things.

Caleb tells Senga that he has to attend an awards dinner-dance, and that part of what he sees as a terrifying ordeal involves dancing at least once. No way, Senga says, but then he offers her $2,153 for one hour of instruction – that amount being a Broadway dancer’s weekly minimum with a dance captain’s bonus added in.Since she can’t work and is in physical limbo because of a rare allergy to the general anesthesia she’d need to have surgery on her leg, Senga gives in.

The story that unfolds, under Stuart Meltzer’s graceful direction, explores the blossoming of an unexpected relationship. Corey’s Senga, orphaned at birth and raised by her aunt in the Detroit-surrounded city of Hamtramck, is a somewhat secretive loner who guards herself with certain autobiographical fictions. Scott’s Ever is an emotionally awkward open book whose life, despite his academic success, has always been difficult.

In fits and starts, the two take baby steps towards change. And a fantasy sequence at the play’s end imagines the romantic beauty of a couple dancing Fred-and-Ginger style, the complications of their lives fleetingly erased.

“Dancing Lessons” is an unusual two hander, demanding actors who can handle the juxtaposition of its emotional delicacy and pop culture-infused comedy.

Corey takes Senga on a trip from understandable depression to a woman who uses her artistic empathy to touch Ever in ways he never imagined. Scott, an actor-playwright who recently moved to South Florida from Los Angeles, is fascinating, a virtuoso of detail and extremely sympathetic as Ever. Part of his task is to make Senga and the audience fall for him, and Scott is impressively adroit in making that emotional connection.

“Dancing Lessons” doesn’t have the edgy bite of Zoetic’s first two shows this season, Suzan-Lori Parks’ “Topdog/Underdog” and Christopher Demos-Brown’s world premiere play “Wrongful Death and Other Circus Acts.” But the company’s production of St. Germain’s play is skillful, inspired and moving, as it explores the relationship of two very different people who master dancing together – if not cheek-to-cheek, then heart-to-heart.

Due to open in a Broadway revival at the end of the month, South Florida theatergoers need only go to Miami Lakes to see a stellar production of "Topdog/Underdog."
Continue Reading

Prolific playwright Ronnie Larsen's latest is about a man who misses his family and finds an inventive way to bring them back. The original work is being presented by Plays of Wilton in Fort Lauderdale.
Continue Reading