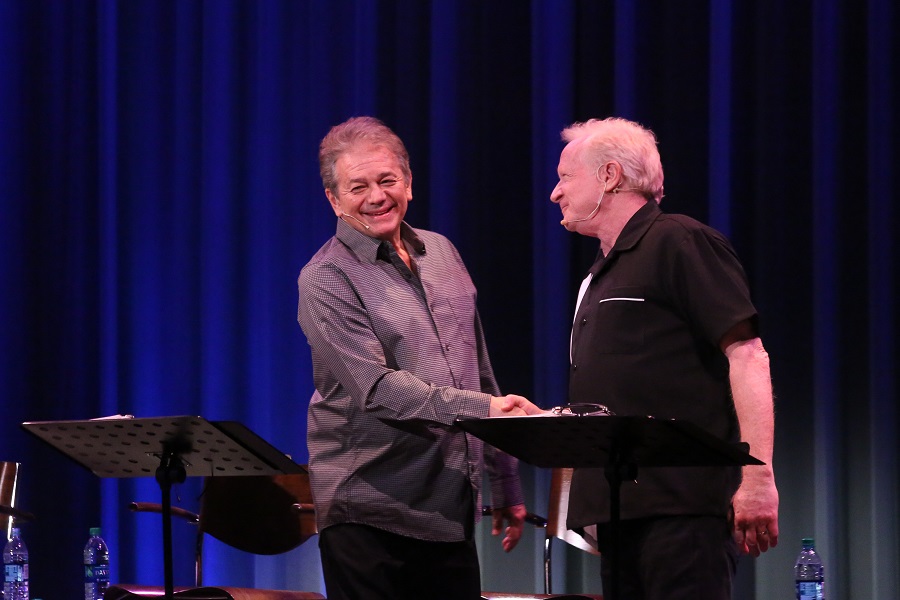 Adrian Zmed, left, plays Tom Hogan and Donny Most is Don Abrams in “Middletown,” opening at Actors’ Playhouse at The Miracle Theater in Coral Gables. (Photo courtesy of IraKuzmaPhotos)

Dan Clancy is eager to tell the story about how his play “Middletown” got its start.

Unlike with the playwright’s “The Timekeepers” — a drama set during the Holocaust, which ran off-Broadway before being produced in 17 countries — there were no big aspirations for “Middletown,” he says. But, through a series of events, the four-character play, which will open Nov. 17 at Actors’ Playhouse at The Miracle Theatre in Coral Gables, has come into its own and is a bona fide theatrical experience.

“Middletown” began as a good deed, as a favor for a theater in Fire Island, Clancy recalls.

“My husband, Charlie, and I had this summer cottage in Cherry Grove on Fire Island, and the community had this wonderful barn theater. The theater was in disrepair and I was asked if I could write something that they could use for a fundraiser,” Clancy says.

In 2017, he put together a play entitled, “Quartet,” for the Cherry Grove Community Theater.

“Now, I know from past experiences that when you write something for a fundraiser — and if there’s a cocktail party after that — you can’t make it longer than 50 minutes. Longer than that and the audience starts thinking to themselves, ‘Should I stick to wine or go for the extra dry martini?’ ” he says, half seriously.

So, there it was. A 50-minute play performed by four friends who were actors at the community theater. 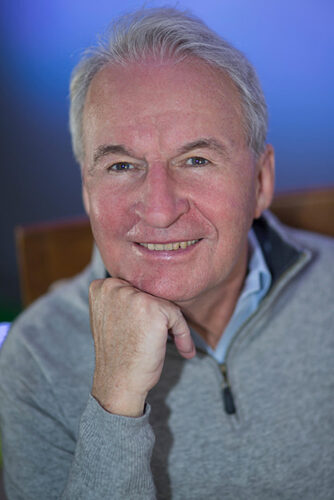 This led to the framework for the play: It’s no longer than 50 minutes, written with characters in their 60s and 70s, with a script that could be presented as reader’s theater. And the story? “These four people had been friends for years. I’ll write about a friendship between two couples,” he says.

The fundraiser was a success, he says, and that was that — until The White Barn theater in Napa Valley wanted to present the play.

“One of the actors had a friend who ran the theater and she said, ‘They need some money, too,’ ” he recalls.

She asked Dan about giving “Quartet” to them for their fundraiser, and he complied. There was just one issue: Clancy remembers White Barn organizers telling him, ” ‘We have people that drive a distance, and they won’t want to drive for a shorter play.’ So, 50 minutes wasn’t going to work for them.”

Clancy added 15 minutes for The White Barn. Then “Quartet” took off and began a run on the fundraising circuit. Theaters were calling him from Palm Springs, Los Angeles, and Asheville, N.C., saying that the four-person play, which had a relatable story and didn’t require anyone to memorize lines, would be a perfect fit. Of course, more theaters meant more tweaks.

“One of the companies asked if I could change the name of the play from ‘Quartet’ to something else. They were concerned that people would expect to see musicians playing a piece by Brahms,” Clancy says.

The title “Middletown” worked on many levels, he says. The play takes place in Middletown, N.J., for one, and there’s probably a Middletown in every state, he says.

It’s about “a town people can relate to and a universal story of love and friendship,” says the playwright, who splits his time between Fort Lauderdale and New York City.

The play follows two married couples, Peg and Tom Hogan and Dotty and Don Abrams, and is staged without a set or many props. It has only music stands and a chair or stool behind each of the stands. The actors read directly from scripts, as if, Clancy explains, they are reading from the book of their own lives.

Seth Greenleaf, artistic director of GFour Productions, became familiar with “Middletown” during Jan McArt’s play-reading series at Boca Raton’s Lynn University in 2016. He could see its potential. GFour Productions has a cadre of Broadway and London’s West End shows in its portfolio, including the perennial hit, “Menopause The Musical.”

And there was a vision for “Middletown.” Part of that included keeping the structure of the play as it was. “After much conversation with Dan, and the way the play reads, it felt really right to keep it as is — to allow the storytelling and the soul of the actors to do the work,” Greenleaf says. 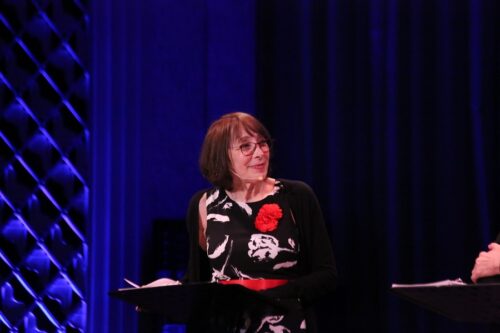 Didi Conn, best known for her role as Frenchy in the movie “Grease,” is one of the stars in “Middletown.” (Photo courtesy of IraKuzmaPhotos)

GFour Productions brought another idea to the table to draw in audiences: using familiar celebrities in the roles. For its first run at The Smith Center for the Performing Arts in Las Vegas in 2019, Didi Conn (known for her role as the pink-haired Frenchy in the 1978 film, “Grease,” among others) joined Donny Most (“Happy Days”), Adrian Zmed (“T.J. Hooker”) and Cindy Williams (“Laverne and Shirley”).

After Las Vegas, the show traveled throughout the United States, stopping in Chicago right before COVID-19 pandemic shut down theaters. Actors Sally Struthers and Sandy Duncan joined the cast at different times, but Conn, Most and Zmed remained the regulars. For the Actors’ Playhouse run, Loretta Swit (“M*A*S*H”) joins the cast.

Greenleaf says the familiar faces work for many reasons. For one, they bring a familiarity to the characters from the get-go.

“Audiences already, perhaps, have had a relationship with these people, so it creates this emotional connection to the characters and their stories,” Greenleaf says. “Having been fans of theirs for so long, I think that helps the style work even better.”

Conn, who has appeared in productions of the show playing both Peg and Dotty, says she has experienced that from the audience.

“The truth is that we have been in people’s living rooms for many, many years,” she says. “They feel like they know us. We feel like we are coming into a theater and an audience of friends, and they feel the same about us. And the theme of the play is about friendship.”

Most says “Middletown’s” mix of acting and reading was ingenious, and it’s what attracted him to the play.

Though he was known as the comedic Ralph Malph on the long-running ABC series, “Happy Days,” Most’s heart has always been in drama. Coming back to theater for him in a dramedy has been a good fit, he says.

“The characters are so richly drawn, [as is] the journey of their lives that the play follows. These two couples have been friends for so many years, through the highs and lows,” Most says.

The characters’ stories are told from the time they are in their 30s through their 70s. “I can personally relate to all the stages of what my character goes through,” says Most, who is 68.

For Greenleaf, who directs the show, bringing “Middletown” to South Florida and having GFour producing it with Actors’ Playhouse (the companies have previously developed shows together) brings everything full circle.

“It’s a homecoming,” he says. “We’ve done multiple iterations of this show. Now we know what it is and why we love it. This is really a celebration of the show and that felt really appropriate to do in South Florida.”

To read our review for this play, click here.

WHAT: “Middletown” by Dan Clancy

SAFETY PROTOCOLS: Audience members age 12 and older are required to provide one of the following: a negative COVID-19 PCR result for a test conducted within 72 hours OR a negative COVID-19 Antigen result for a test done within 24 hours before the show OR proof of full COVID-19 vaccination. All audience members are required to wear a face covering at all times, “except when eating and drinking in designated areas,” according to the theater website.