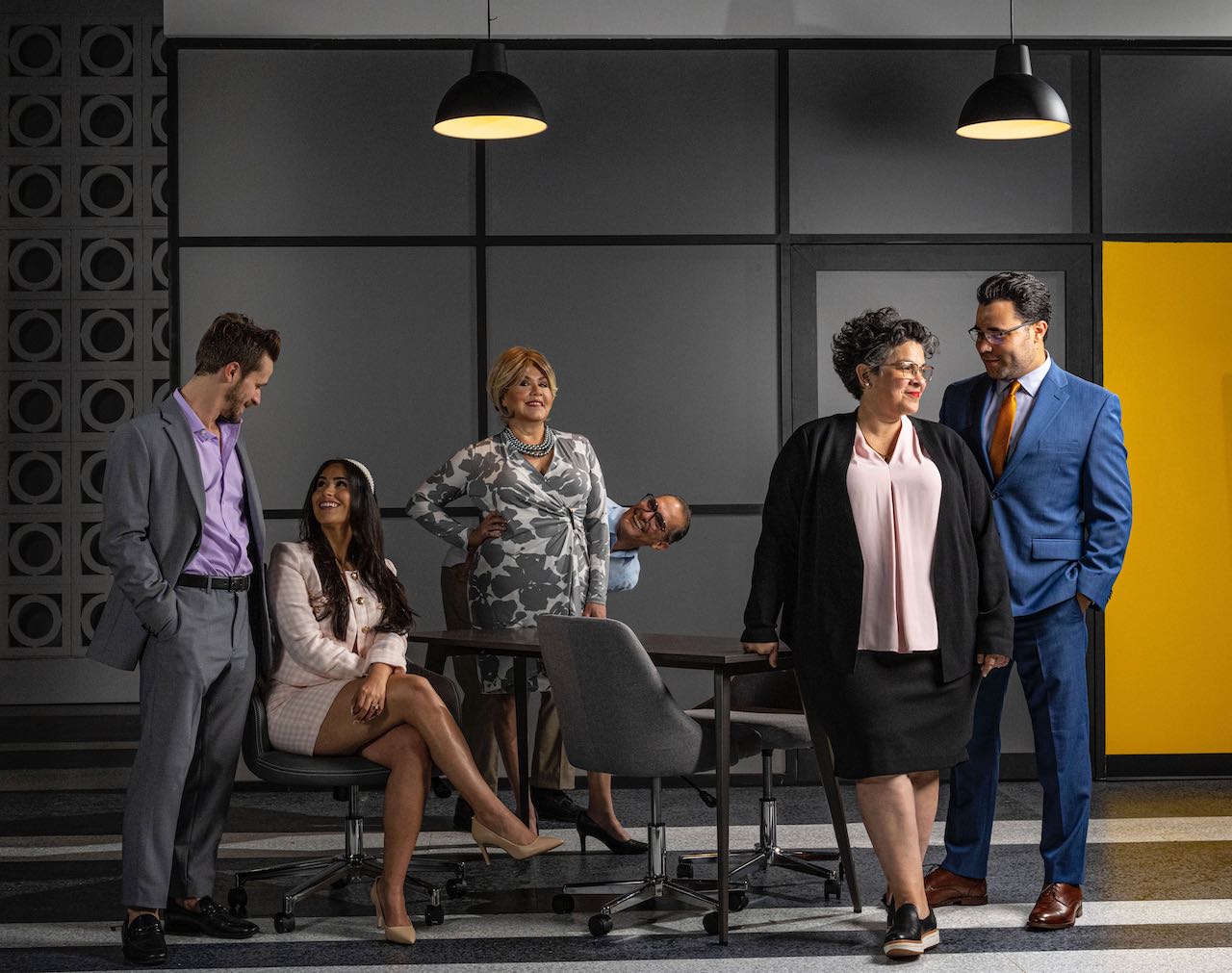 Playwright, actor and activist Carmen Pelaez is one dynamic woman. Outspoken, imaginative, always ready to fight for a better Miami, Pelaez has played a variety of roles in her family inspired works and in plays by others.

But during a talkback after Miami New Drama’s world premiere of her art world drama “Fake,” moderator-journalist Mirta Ojito pointed out that Pelaez had thus far avoided romance in her writing.

“I said, ‘I don’t write anything romantic because I don’t like writing tragedy,’” the playwright quipped. “Being a big girl, knowing how society sees you, I never thought I’d play a romantic lead.”

With previews beginning April 22 and an official opening April 30, “The Cuban Vote” – written by and starring Pelaez – embroils her character in a race for Miami mayor, with a distinct romantic undercurrent loosely inspired by William Shakespeare’s “The Taming of the Shrew.”

“I always loved the dynamic of the relationship in ‘The Taming of the Shrew,’” Pelaez says. “I only ever fall for people when they’re really challenging.”

Continuing to support Miami-based artists, bringing back accomplished Miamians who have built prominent careers elsewhere, and creating seasons that feature only world premieres are all part of Hausmann’s vision for Miami New Drama. 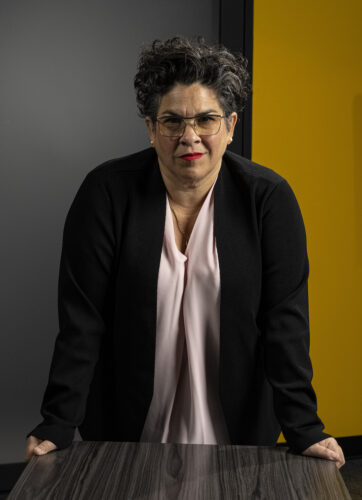 “We’ve been a very aspirational theater company. We want to be a theater that only does world premieres, with most of them in conversation with our community. We’ve arrived at that moment — we’ve commissioned a lot of work,” Hausmann says.

“The Cuban Vote” is a comedy centering on the mayoral campaign of Carolina “Caro” Clarens (Pelaez), a blunt-to-a-fault candidate whose passion for public service was ignited when she worked with her late father, a former mayor.

Although many admire her intellect and ideas, Carolina’s penchant for brutal honesty has hurt her in the polls. So hotshot D.C. political consultant Alejandro “Alex” Mesa (Andhy Mendez) is brought on board to polish the candidate’s rough edges – thus becoming a kind of 21st century Petruchio to Carolina’s outspoken Kate, though without the blatant misogyny.

“Carmen spends the entire play making fun of herself. Carolina is an exaggerated version of Carmen. She makes fun of Miami, the Cuban community, tech bros, the failures of government,” Hausmann says. “It has to resonate with Miami and speak truth to power so we see our own defects. It’s hilarious — it shows that ‘the Cuban vote’ is not a monolith.”

To bring the play to fruition, Hausmann paired Pelaez with a Miami artistic expat he greatly admires, director Loretta Greco.

The artistic director of San Francisco’s famed Magic Theatre was recently named the first woman artistic director in the 40-year history of Boston’s Huntington Theatre Co. Her lengthy resume includes directing on Broadway, off-Broadway and at regional theaters, including Miami’s Coconut Grove Playhouse. In 1978, she was the Silver Knight Award winner in drama — and, after earning degrees from Loyola University and Catholic University, she came home to teach drama at her alma mater, Southwest Miami High School, in the 1980s.

Though Hausmann had earlier asked Greco to take on different Miami New Drama projects, she always had conflicts. But he persisted. 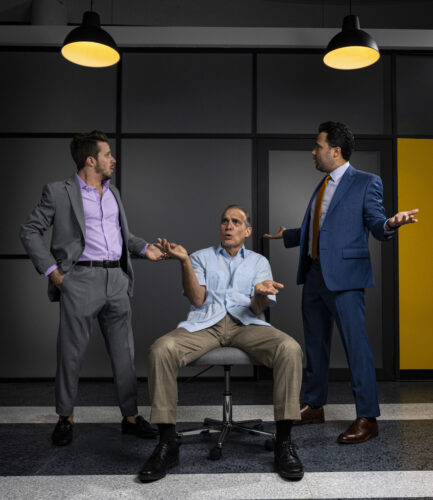 “Michel just wouldn’t give up.  I thought, ‘OMG, there’s someone with the same tenacity I have,’” Greco recalls. “I read the play, and thought it had been so long since I’ve been connected to Miami and Cuba. I felt, ‘This is really good, but it could be great.’”

When Greco is working on a world premiere — and she’s done more than two  dozen — it’s her practice to sit with the playwright and go over the script line by line, asking questions and giving notes.

Pelaez “did a very thorough, rigorous revision,” she says. “We wanted to know how substantive this could be without becoming part of the partisan noise. The play talks about issues Miamians care about, but it doesn’t get into the red-blue weeds.”

For her part, Pelaez is thrilled to be working with Greco.

“My first draft was horrible. Michel was great at homing in on what worked and what didn’t.  He asked me to work with Loretta,” the playwright says. “Within a minute and a half, I was in love with her. She pinpointed exactly the things I also knew … It’s been a real partnership.  She looked at problems and made suggestions, but she was never prescriptive.”

The play is performed by six Cuban-American actors, all living in or originally from Miami.

Mendez, who plays the political consultant, previously appeared in Miami New Drama’s “Confessions of a Cocaine Cowboy,” “The Cubans” and “Seven Deadly Sins.” He most recently played Fidel Castro in the world premiere of Eduardo Machado’s “Celia and Fidel” at Arena Stage in Washington, D.C. Among his extensive film, TV and stage highlights, Mendez was directed by Pulitzer Prize-winning Miami playwright Nilo Cruz in the “Sotto Voce” — and he likens Greco’s directing style to Cruz’s.

Marcela Paguaga, a New World School of the Arts graduate, plays Carolina’s sister, the social media wizard Blanca, with Evelyn Perez as their wise mother, Ofelia. Kristian Bikic is Benji Carbonell, a pal of Alex Mesa’s and a guy with two things on his mind: marrying Blanca (who, he believes, can’t wed until Carolina does) and making a killing in bitcoin.

Los Angeles-based Jonathan Nichols-Navarro, born in Havana and raised in Hialeah, plays the guayabera-wearing, old-school politician Gilberto Ruiz, a mayoral-race late entry who threatens to upend Carolina’s campaign. Once Gilberto is in, the contest becomes a study in contrasts: The younger Carolina remains focused on substantive issues (fair pay, climate change, housing, homelessness), while the cagey-but-folksy Gilberto represents an older, more conservative generation comfortable with special interest money and ready to use the hot-button words “communism” and “socialism” as weapons.

“I’d describe the play as ‘West Wing’ meets ‘Veep.’ There’s an urgency to it as well as comedy. But if people take anything away, it’s a love story,” Mendez says. “Carmen is a fair person. She doesn’t say one side is good and the other is bad. She knows how to maneuver the conversation without attacking one side or the other. It’s a piece about communication.”

Mendez also thinks that the way Pelaez strategically uses Spanish in the play — words here and there, sometimes in the middle of a sentence that is otherwise in English — rings very, very true.

“It’s genius. We live in a city that’s so different from any other one. We’re experts in starting a conversation in English and finishing it in Spanish,” he says. 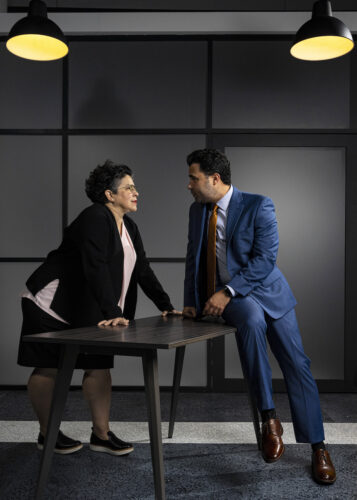 Candidate Carolina Clarens (Carmen Pelaez) and political consultant Alejandro Mesa (Andhy Mendez) have yet another faceoff in a play that’s reminiscent of Shakespeare’s “The Taming of the Shrew.” (Photo/Rafael Guillén)

Nichols-Navarro played the lector in the Pulitzer Prize-winning “Anna in the Tropics” at the Coconut Grove Playhouse in 2004. Playing Gilberto in “The Cuban Vote,” he says, poses a different kind of challenge.

“You have to make him lovable, charming and conniving … I use an accent. He’s an old guy from the old country, the refugee who straddled the island and the Florida peninsula all his life,” the actor says. “I come in, get laughs and leave. You almost don’t believe someone would vote for him, until you look at the last few years.”

Campaign ads and videos are an integral part of the storytelling in “The Cuban Vote,” so one day recently Nichols-Navarro donned Gilberto’s omnipresent guayabera and went with a crew to Little Havana.

“It’s the most Cuban I’ve felt in a long, long time. They put me in a rum barrel [Gilberto’s method of transit from Cuba] in front of a picture of the Malecón. I rolled cigars. I went to a senior home, then danced and serenaded three women. I played a game of dominoes,” he says. “Listen, if you play even half of that video, the audience will fall in love with Gilberto.”

Paguaga, who played singer Margarita Maria Mendoza in the long-running immersive hit, “The Amparo Experience,” agrees that Pelaez got the substance and style of Miami’s Cuban community just right.

“Carmen is a powerhouse. Everyone on that stage is [like] someone you know,” she says. “I grew up in Hialeah, and I tell people my native language is Spanglish. For me, it’s organic. It feels natural.” 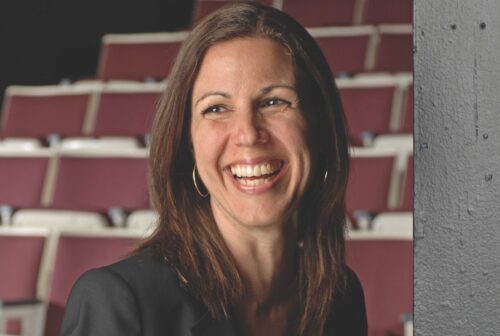 Bikic, who’s returning to Miami after working in Los Angeles and taking a pandemic career pause, is the son of a Cuban mother and an Argentine father. He describes himself as looking like “a super gringo,” and acknowledges that in the past he kept his cultural heritage at bay. But “The Cuban Vote” has already done more for him than giving him a role in a world premiere.

“It’s cool to represent a different type in this population. [During rehearsals], I’ve learned more about my culture and embracing it. I want Miamians to come see this play,” Bikic says.  “Carmen’s writing is sharp, smart, funny and true. The accuracy that’s in this script is crazy.”

That Pelaez, the grandniece of famed Cuban artist Amelia Peláez, would get Cuban-American Miami so right is no surprise. She grew up here, got her training at the American Academy of Dramatic Arts and lived in New York for a time, then came home after the success of her hit solo show, “Rum & Coke.”

In terms of politics, she has worked with local and national campaigns, and she has been involved with the Miami Freedom Project, founded by her sister Ana Sofia Pelaez and the late Patrick Hidalgo. “The Cuban Vote” is dedicated to that organization.

“This is highly emotional. Anything involving Cuban politics is a third rail – you have to make sure that any criticism considers all sides,” Pelaez says. “The day the play was due to Miami New Drama, Patrick died … It was an incredible shock. So much of what I learned about political service I learned from Patrick.”

Her newest role, she says, is and isn’t like her.

“I really summoned my vulnerability to create her. Her approach to political work is the same, but I’m not nearly as confident. I’m stubborn, but I’m not as arrogant. I don’t want to play me,” Pelaez says. “She’s awesome, amazing. She holds on a lot tighter to what matters. Her quick humor is modeled on my personality.”

“People have asked me to run for office, but I have zero interest in service,” she says. “I am not strategic.  She has a plan for everything. I would be a nice dictator.”

WHAT: Miami New Drama’s world premiere of “The Cuban Vote” by Carmen Pelaez