‘Come From Away,’ a musical about post-9/11 healing, arrives in Miami 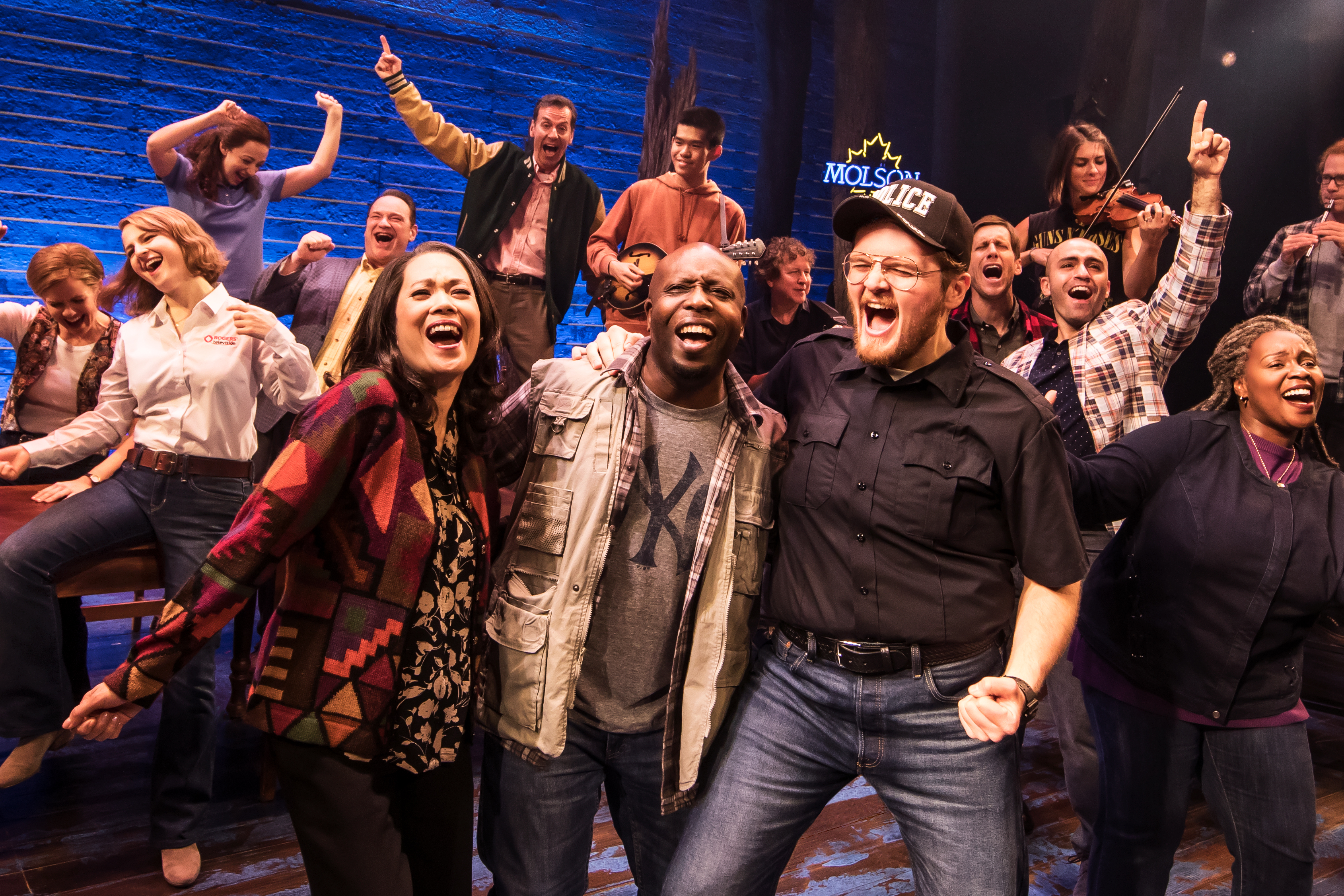 Capt. Beverley Bass was in her happy place, piloting an American Airlines Boeing 777 from Paris to Dallas, when the world changed. On the morning of Sept. 11, 2001, Bass was above the Atlantic Ocean, monitoring the frequency airline personnel use to communicate over international waters.

“Someone came on and said one of the Twin Towers had been hit. We thought it was a light plane,” says Bass, who retired from American in 2008 but still flies a private jet for an 82-year-old businesswoman. “Twenty minutes later, we learned it was terrorism and that it involved a commercial airliner. After we learned that all United States airspace was closed, I got ready to program the computers for Montreal or Toronto. Then, we were diverted to Gander.”

Thus began a saga that, perhaps improbably, became the subject of the hit musical “Come From Away.” Landing at Miami’s Arsht Center June 18 for a run through June 23, the show chronicles extraordinary acts of kindness by the 10,000 residents of Gander, Newfoundland, as 38 international flights carrying nearly 7,000 passengers and crew were rerouted to their small town.

The musical was created by the Canadian husband-and-wife team of Irene Sankoff and David Hein, whose major previous credit was the 2009 show “My Mother’s Lesbian Jewish Wiccan Wedding,” a Toronto Fringe Festival hit based on the experience of Hein’s mom. Taking up an idea suggested by lawyer-producer Michael Rubinoff, and with the help of a grant from the Canadian government, the two went to a 10th anniversary gathering of Gander residents, passengers and crew members. There, they found a gold mine of warmth and personal stories.

“We talked to at least 100 people, and right away we started making friends with them,” Sankoff says.

Adds Hein: “Sometimes, we’d talk to them for hours and hours. They would invite us to their houses for dinner. Then, they’d invite us to stay over.” 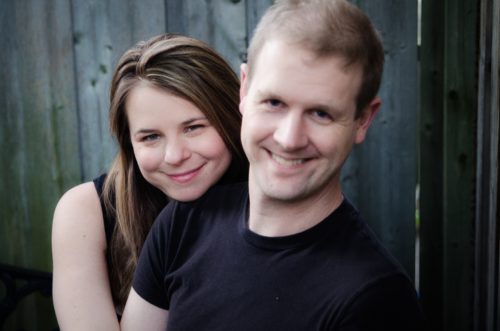 The married Canadian musical-theater team of Irene Sankoff and David Hein created “Come From Away.”

Although “Come From Away” reflects the fears and worry of travelers unable to leave Gander or get information about loved ones, the musical focuses more on goodness in the face of unfathomable evil. Bass, whose flight was the 36th out of 38 diverted flights to land in Gander, shares an illustrative example.

“We were held on the plane and not allowed off until 7:30 the next morning, so we were on it for a total of 28 hours,” she says. “When we walked into the terminal, there were tables and tables and tables of food lined up. People had stayed up all night and cooked for us.”

The musical’s ensemble cast plays multiple roles, shifting from townsfolk to passengers to airline professionals as they sing a score that combines Broadway-style songs and Irish/Celtic-flavored numbers that sound like Newfoundland.

Actor Nick Duckart, who graduated from Hialeah Senior High School and Miami’s New World School of the Arts, plays a Muslim passenger named Ali, half of a gay couple who share the first name Kevin, and other roles. Although he was young, just starting his sophomore year at Hialeah High when the Sept. 11 attacks occurred, his memories of that day are vivid.

“Before that day, I visited New York for the first time with my brother,” says Duckart, whose family came to South Florida from Argentina. “After seeing ‘Phantom of the Opera’ — my first Broadway show — the rest of our agenda included a trip to the World Trade Center. Having gone to the top and looking out over the city, I was inspired to give every ounce of my being to a life in the theater.

“A few weeks after, 9/11 happened. And this symbol of youthful optimism for me was gone, [as were] the lives that went with it. That was the first time I felt my innocence being compromised.” 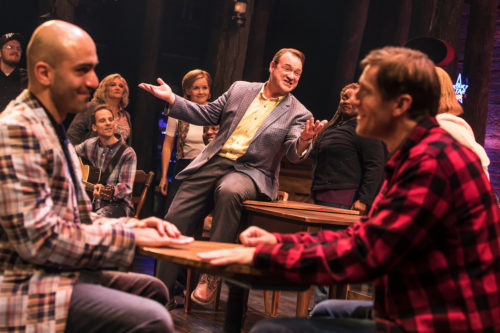 In foreground from left to right: Hialeah native Nick Duckart, Kevin Carolan and Andrew Samonsky play Gander residents and plane passengers in the touring production of “Come From Away.” Photo courtesy Matthew Murphy.

At school, one of his close friends was a Muslim student from Pakistan, and Duckart saw how life changed for his friend after 9/11. Now, his pal is married with a family, and he’s bringing 10 people to the Arsht Center to see Duckart in “Come From Away.”

Duckart, whose wife Mariand Torres is currently touring as Elphaba in “Wicked,” describes the simple storytelling style and immense scope of “Come From Away.”

“We are 12 actors in 12 chairs, representing 17,000 stories in 100 minutes,” he says. “We try to tell the story honestly and not be overly emotional or sentimental.”

Becky Gulsvig, who has been in several Broadway shows and touring companies, gets to play Beverley Bass, the Gander town librarian and other roles. Like the majority of the performers who have portrayed Bass, she has met and become friends with the pilot. As of June 3, Bass says, she had seen “Come From Away” 128 times, using her free flying privileges as a retired pilot to follow the show to other cities and countries.

In the musical, the Bass character’s showcase song is “Me and the Sky,” with many of the lyrics drawn verbatim by Sankoff and Hein from their interviews with her. Gulsvig has never had the particular dream of becoming a pilot, but she feels its meaning.

“Anybody with a passion for anything can connect with that song,” she says. “My passion is for theater. I feel about singing and theater the way Beverley feels about flying.”

Gulsvig, who calls the score brilliant and says she would do the show until the end of time, is nonetheless leaving the company at the end of the summer. She has an 8-year-old daughter who has stayed home in New Jersey with Gulsvig’s husband, and parenting by phone call, texting, emails and FaceTime just isn’t the same.

“When I leave the show, it will be a day of cake and tears. It will be heart-wrenching,” she says. 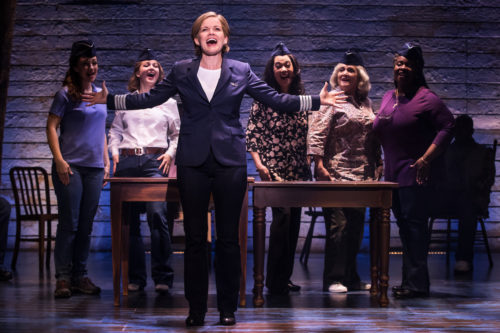 Becky Gulsvig (front) conveys the deep love of flying central to the life of American Airlines pilot Beverley Bass in the touring production of “Come From Away” at Miami’s Arsht Center. Photo courtesy Matthew Murphy.

“Come From Away” evolved during a pre-Broadway process with tryouts in La Jolla, Calif.; Seattle; Washington, D.C.; and Toronto in 2015 and 2016, then opened on Broadway in 2017. A few nights after its official opening, Canadian Prime Minister Justin Trudeau came out before the start of the show and spoke to the crowd. Sankoff and Hein say Trudeau has written the introduction to the show’s companion book, which will be published in September.

Among their most treasured memories, however, were concerts of the show’s songs given in Gander before the Broadway opening. “We did the concerts to benefit the local community,” Hein recalls. “Five thousand people came to see the show, and when the cast sang the opening song, ‘Welcome to the Rock,’ they all stood up and cheered. The entire cast burst into tears. How often do playwrights get to interact with the people in their shows?”

As for Bass, who grew up in Fort Myers, she has added to her vast network of friends because of “Come From Away.”

“We refer to it as the 9/12 story. It’s about all the wonderful things that happened to us after our country suffered the worst tragedy in American history,” she says. “This show has connected people all over the world.”