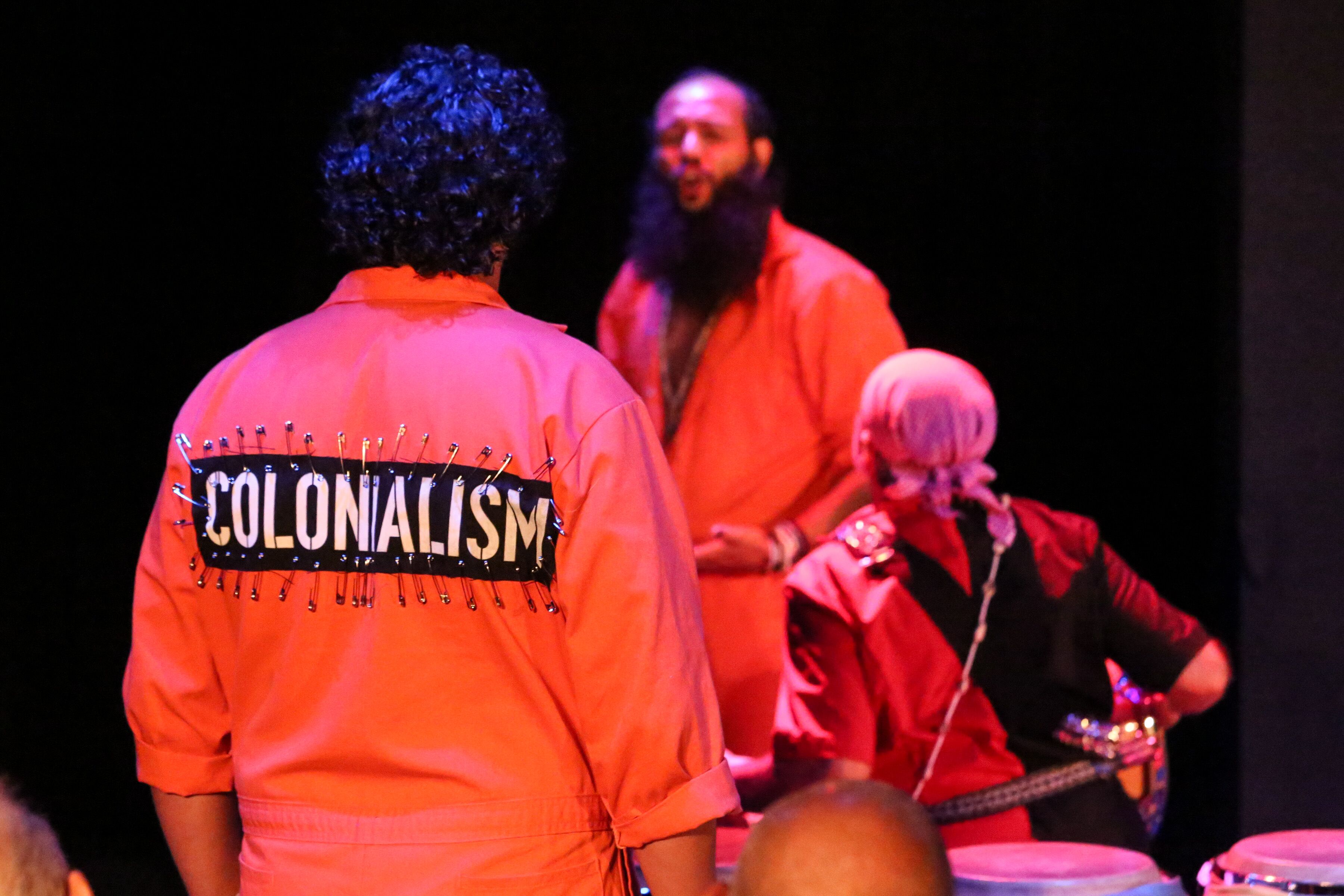 They aren’t going to sugarcoat it for you: War is hell. But the Combat Hippies, three Miami-based military veterans of Puerto Rican heritage, promise to enlighten and entertain as they recount their personal journeys of Iraq and other far afield deployments, communicate stories of Syrian refugees and, as they say, “explore the quest for meaning, purpose and identity sought through enlisting in the military.”

The group’s second original show, “Amal,” commissioned by MDC Live Arts at Miami Dade College, makes its premiere Friday, March 29, and Saturday, March 30, at Miami-Dade County Auditorium. After that, the Hippies are going national: They are booked for a multicity tour of “Amal” that includes Denver, Milwaukee and San Jose, Calif.

The Combat Hippies are one of MDC Live Arts’ biggest success stories, says Kathryn Garcia, executive director of MDC Live Arts. “They are a phenomenon, and we are very proud,” she says.

For “Amal,” the Hippies wear orange jumpsuits. Emblazoned on the back of one of two jumpsuits is a patch adhered with safety pins that reads, “war.” The other  reads, “colonialism.”

“The patches speak to the impact of war and its intentions,” says Anthony Torres Jr., the Hippies’ executive director, writer and performer.

Words and what they represent are at the center of the performance ensemble. And rightly so. The troupe evolved from words, a creative-writing workshop that was part of a veterans’ initiative created by MDC Live Arts and funded by the John S. and James L. Knight Foundation.

Garcia explains that during its 2014-2015 season, MDC Live Arts was presenting a multidisciplinary performance, “Basetrack Live,” that examined the collective experience of those who had served in Iraq and Afghanistan.

“When we took on that project, we wanted to figure out how to involve the local veteran community. We wanted to go a step further,” Garcia says.

They created Live Arts Veterans Lab and tapped actor, playwright and director Teo Castellanos to lead it. Meanwhile, they had heard that Torres had started an open mike at the Miami Veterans Administration Medical Center, where he was working, and asked him to help recruit local veterans for the writing project.  After four months, the Live Arts Veterans Lab culminated in a showcase of the participating veterans’ works during that year’s O, Miami Poetry Festival.

“We had no expectations, whatsoever,” says Garcia, adding that the idea was more about the process and not a product.

It was so well done and well received that the following season, MDC Live Arts commissioned a theatrical piece. “As we learned about Teo’s work in examining social issues through theater performance, we began to have a clearer picture of the stories we wanted to explore,” Torres says. The group became the Combat Hippies, and the theatrical piece became “Conscience Under Fire.”

“It impacted the audience. People were laughing and crying, and as soon as we were done, everyone said, including us, ‘When are we doing this again?’ ” recalls Torres, who was born in Brooklyn and raised in Utica, N.Y.

Torres explains that “Amal” moves one step further from “Conscience.” “The new show speaks about not only how war affects us as veterans,” he says, “but also the people living in the countries who are forced to become refugees due to war.”

Some of the work is culled from spoken interviews conducted with the Syrian refugee community in South Florida, and they explore Puerto Rico’s military heritage, since all the members of Combat Hippies are of Puerto Rican descent.

“Because we are speaking from that perspective, we had to address Hurricane Maria and the U.S. government’s response to it,” Torres says. “Amal” is presented as theater-in-the-round, which is meant as a representation of the swirling hurricane.

And the costumes? When they were in discussions with designer Karelle Levy, Torres says they wanted something that represented a metaphor of “prisoners of our own mind, prisoners of conscience and, literally, prisoners of war.” Ironically, Torres says, when Levy came back with the design, the color was orange. What no one realized except for Torres was that orange was the color prisoners wore in Abu Ghraib prison in Iraq.

“In 2004, I was deployed for a year to work at Abu Ghraib, and those were the colors of the suits,” he says. “I do a string of short, spoken-word pieces on my interaction with Iranian detainees while I was deployed there.”

Hipólito “the BeardMan” Arriaga III, the Combat Hippies’ second frontman, was born in the South Bronx. He joined the U.S. Marine Corps in 2003 at the age of 19, and served in two deployments to Iraq. The third member is percussionist Angel Ruben Rodriguez Sr., a Vietnam veteran, born in Bayamon, Puerto Rico.

Castellanos is the artistic director of the Combat Hippies, as well as dramaturg and director of “Amal.” The original AfroRican punk soundtrack is produced by Seth “Brimstone” Schere.

“Some of what we portray is painful, but we’re ourselves. There is a rawness to the Combat Hippies that we find people get caught up in,” Torres says.