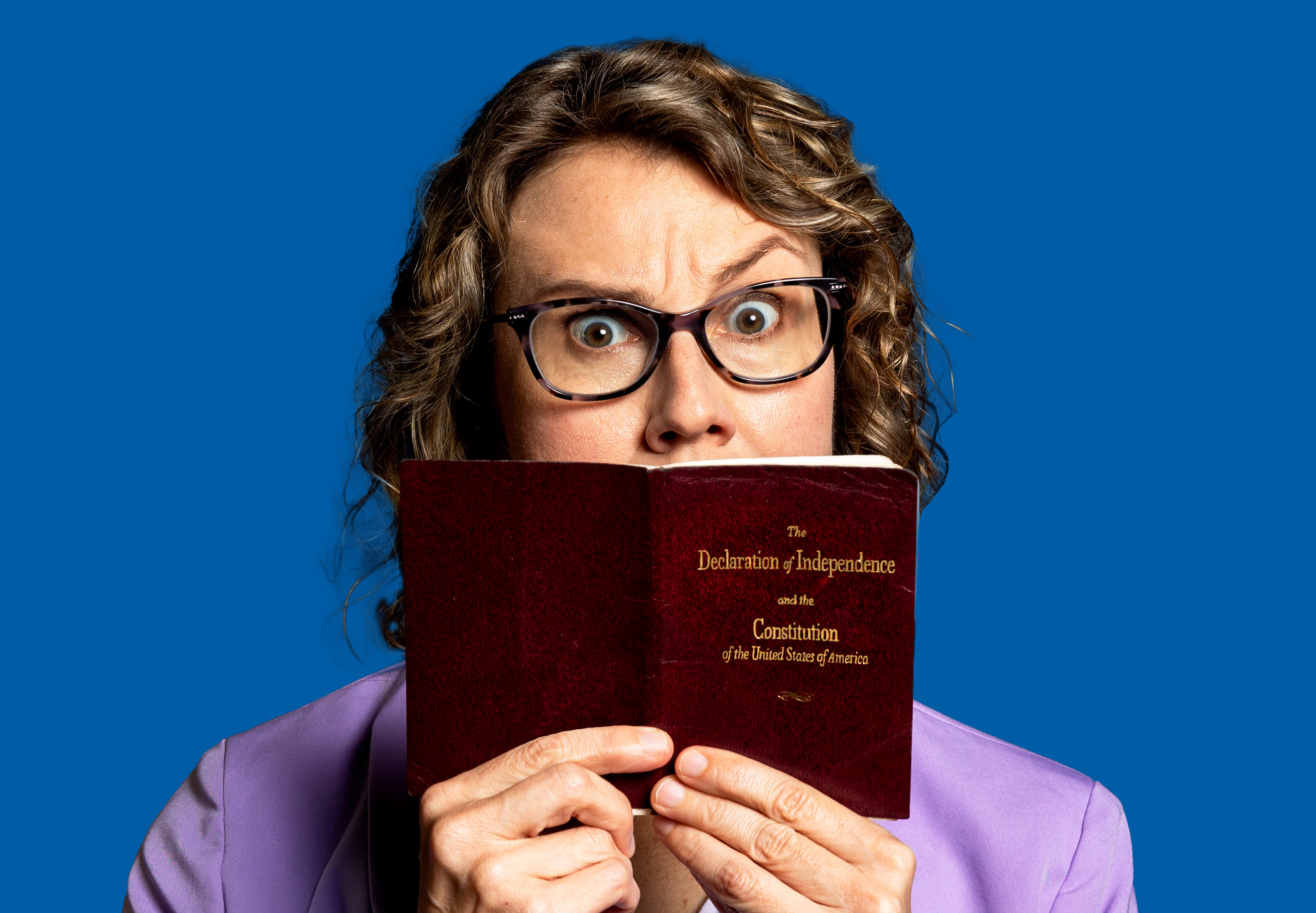 Elizabeth Price portrays playwright Heidi Schreck in City Theatre’s “What the Constitution Means to Me” at the Carnival Studio Theater inside the Adrienne Arsht Center. (Photo courtesy of Morgan Sophia Photography)

When actor, playwright and screenwriter Heidi Schreck was a teen growing up in Wenatchee, Washington (aka “The Apple Capital of the World”), she began entering debate competitions at various American Legion posts around the country, vying for prize money to help her pay for college.

Her subject? The United States Constitution, a document that became a 15-year-old’s obsession, one right up there with the Salem witch trials, theater and Patrick Swayze.

We know about those objects of her teen affections because she wrote them into her play “What the Constitution Means to Me,” which will get its southeastern premiere in a City Theatre production. The show runs at the Carnival Studio Theater in Miami’s Arsht Center Dec. 1-18. 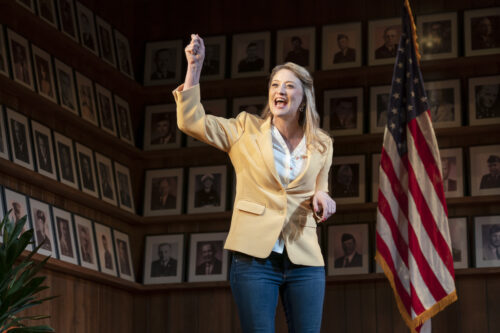 Heidi Schreck wrote and performed in “What the Constitution Means to Me,” off-Broadway, on Broadway and on Amazon Prime Video. (Photo courtesy of Joan Marcus)

Schreck, now 51, proved to be an excellent debater.  She graduated from the University of Oregon, then went on to further adventures as an English teacher in Siberia and a journalist in St. Petersburg (the one in Russia, not the one near Tampa) before beginning her theater career in Seattle.

In New York, she became an Obie Award-winning actor, then began to see her plays produced and recognized in playwriting competitions. But little did she imagine that the 2017 play inspired by those long-ago debates would lead to her becoming a finalist for the 2019 Pulitzer Prize for drama as well as a 2019 Tony Award nominee for best play and best actress in a play.

“I started noodling around with it, revisiting the contest in 2009 or 2010,” says Schreck, who’s currently down to the wire with a television pilot.  “I’m interested in writing about teen girls, and this was a weird, funny, formative experience that made me feel powerful.”

City Theatre’s Margaret M. Ledford, artistic director of the company best known for its Summer Shorts festival since 2017, chose “What the Constitution Means to Me” for its annual December full-length play slot because “it’s such an empowering play, as a woman and a U.S. citizen.  It made me think everyone should see it.  The script is tight, concise, funny and engaging. It has such an earnestness, but there’s nothing preachy about it.”

Operating on multiple levels, the play focuses on Schreck telling her story, first as a 15-year-old, then as an adult, followed by a debate with a student on whether the Constitution should be abolished. An American Legion member talks about the rules and keeps things running smoothly, but he eventually reveals his own backstory in a riveting monologue. 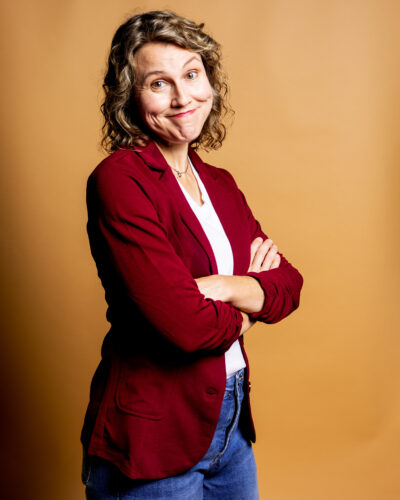 The concept of constitutionally enshrined negative and positive rights is explored in the play, with the former prohibiting an action and the latter requiring one. If that sounds dry or confusing, the way it plays out is anything but.

As she talks, Schreck’s character reveals exactly how she believes the negative rights enshrined in a Constitution devised by 18th-century white male landowners failed to protect generations of women in her family.  That is the beating, valiant heart of “What the Constitution Means to Me.”

“The question was always, ‘How did this document change your life?’  I took that deeply seriously, so I researched my family history in relationship to the document,” says Schreck, whose discoveries became a vividly shocking part of her play. “I was heartbroken about what I discovered. But the women in my family lived through it, and I’m lucky my mom was such an amazing person and survivor.”

Yet, as Ledford noted, the play is sometimes very funny and so inventive that it sounds almost improvisational, but it isn’t.  Though the world surrounding the play is constantly evolving and giving fresh urgency to Schreck’s words, the script itself holds up.

“The contest portion doesn’t need changes, since it’s set in 1989 and is historical,” Schreck observes.  “I’ve made a couple of tiny edits to the part where I’m a middle-aged woman.  The biggest changes come in the debates (at the end), where elements change from night to night.”

Schreck performed in a filmed version of the play shown on Amazon’s Prime Video in 2020, but she always intended for other actors to play the Heidi character.  In Miami, Elizabeth Price will do the honors, calling the role “the biggest thing I’ve ever done.”

That’s saying something, since Price – who is also a director, producer and associate artistic director of Fort Lauderdale’s New City Players – is an award-winning actor whose resume includes “Twelfth Night,” “The Importance of Being Earnest,” “The Normal Heart,” “August: Osage County,” “Misery” and a host of other plays at theaters around South Florida and in other cities.

A two-time Silver Palm Award winner and three-time Carbonell Award nominee, Price is also a determined survivor. When she was teaching and earning her master’s degree in acting at Florida Atlantic University, a car hit her at night as she was riding her bike one night.  From 2017 to 2019, she endured seven surgeries – although she did take on certain physically limited roles during that time – and today, she says, “I’m doing pretty well. I have the agility and use of my body back, just some small daily challenges.” 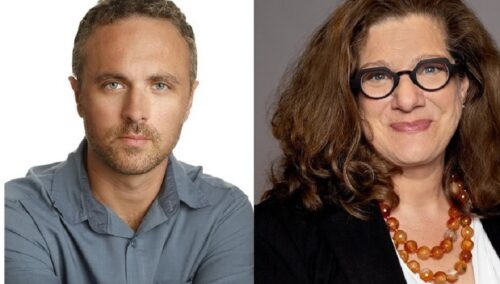 Ledford cast Price, whose relationship with City Theatre began as a literary manager while the actor was earning her bachelor of fine arts degree from Barry University, after auditioning a number of performers.

“Elizabeth has that nerdy, goofy, earnest, smart quality. The role calls for a strong female who doesn’t have authority to be strong,” the director says.

When she heard City would be doing the play, Price read and loved the script, then watched Schreck in the Prime Video version.  She loved that too and thought about what she could bring to the role that gives her the lion’s share of lines in the play.

For Price, rehearsing to play 15-year-old Heidi, adult Heidi and herself (as she does in the last part of the play) has brought its own kind of healing and inspiration.

“The more time I spend with the characters, the more I identify with the with the play, the way Heidi talks about making decisions and choices as a woman influenced by centuries of laws,” Price says. “I’ve picked up a lot of people pleasing. Things I’ve experienced were being named.  How I behaved when I felt I was in danger.  That’s a lot in my 48 years.”

The play’s nature allows for a complex range of emotions for the actor and the audience.

“Every time I’m rehearsing the personal stories, I’m crying,” Price says. “The play takes us to places in the dark recesses of the human heart, then lets us out, then takes us back.  It’s cathartic, really. It doesn’t bring us down. It allows us to laugh and grieve.”

Sharing the stage with Price are actor-director Seth Trucks as an American Legion member, and recent New World School of the Arts grad Janine Raquel Johnson as a young debater (others will also take on that role during the run).  Trucks and Price shared the stage in an Outré Theatre Company production of “The Normal Heart” in 2016, he directed her in a production of  Palm Beach Shakespeare Festival’s “Twelfth Night” in 2021, and the two are longtime friends.

“I’m extremely excited by the somewhat improvised ending and the way it engages the audience in a conversation,” says Trucks, son of the late Allman Brothers drummer Butch Trucks.  “I couldn’t be happier.  Politics is concerned with art, so as an artist, I love to concern myself with politics . . . The idea of negative vs. positive protections in the Constitution hones in on things a lot of people don’t know about.” 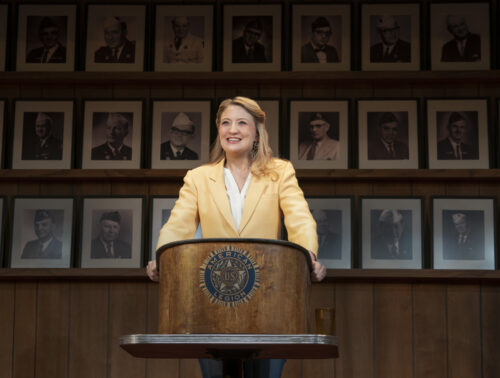 Heidi Schreck’s “What the Constitution Means to Me” was nominated for a Tony Award for Best Play in 2019, and earned Schreck a nominee for Best Actress in a Play and also as a finalist for Pulitzer Prize for drama. (Photo courtesy of Joan Marcus)

“What the Constitution Means to Me” comes at a time of transition, evaluation and potential growth for City Theatre.  Susan Westfall, the only one of City’s three founders still involved in day-to-day operations of the 27-year-old company, will now serve solely as a board member.  Ledford will continue leading the artistic side, while newly promoted executive director Gladys Ramirez heads City’s business and developmental operations.

“Our focus is putting the ‘city’ in City Theatre.  We have a national platform and great connections to playwrights around the country, but we want to elevate our presence in Miami – to reflect, uplift and serve the community,” says Ramirez, who notes that City’s Homegrown new play development project led by playwright Vanessa Garcia is just one such initiative.

“City Theatre is short plays. That will always be part of the brand. . . How do we stay true to that while we keep developing new work and also connect through full-length plays? We can’t rely on audiences of the past to take us into the future.”

Schreck and those involved in City Theatre’s production feel that some of the nation’s current divisions can be linked to the Constitution – although Schreck doesn’t believe Americans are as divided as recent elections might suggest.

“It seems clear that a lot of what’s harming our democracy is structural and embedded in the Constitution,” says Schreck, who suggests that legally protected bodily autonomy, limits to corporate campaign contributions, an impartial body to oversee redistricting, the right to health care for all and the Electoral College system all need addressing.

“We are just living in such a polarizing climate, where people don’t talk to one another,” says Ledford.  “We are individually so disconnected from our roots, our food sources, original thought – we’re very sheeplike.”

WHAT: “What the Constitution Means to Me” by Heidi Schreck