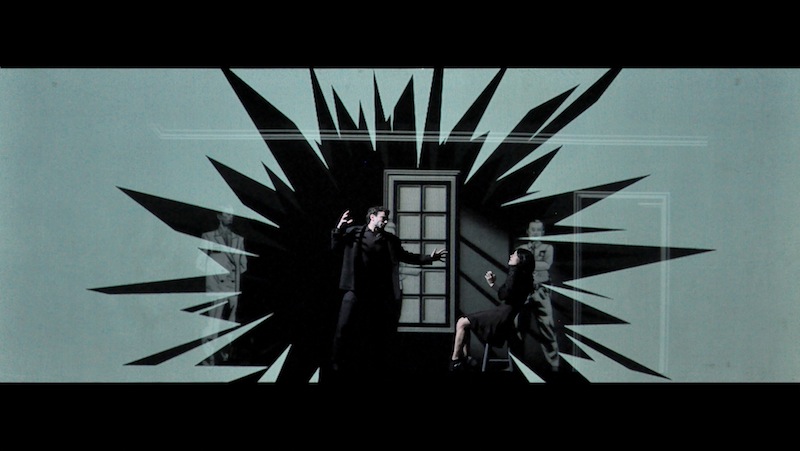 Heralding from Chile, Teatro Cinema company is among the most genre-busting, let alone accomplished group to present work in South Florida. Besides its base in Santiago, the company has a permanent home in Paris. Such is its popularity in Europe, most especially in France.

Just what is Teatro Cinema? Frustrated by the limits of both stage and screen, Teatro Cinema marries them. But this isn’t as simple as using background images as stage set, although Teatro Cinema does use that technique in marvelously complex ways, as images complement and contradict stage action. But Teatro Cinema adds yet another dimension, adding a scrim between stage and audience where still more images can be projected as actors move back and forward in time. Some of the images are photographs, others are hand drawn, others are animated. All in all it took the company two years to mount this production, Historia de Amor.

As complex as this sounds, what results for the audience is a marvelously fluid experience, closer perhaps to how our mind and memories actually function than one can usually experience in either theatrical or cinematic presentations.

Teatro Cinema doesn’t shy away from dark themes in its work. Likewise, each image, every video clip is in black and white, deepening the “noir” aspects of the action.

And “noir” they are. Saturday’s production of Historia is in the words of director Juan Carlos Zagal, “the fruit of an obscure, deep and contemporary loneliness.” It is a story of a predator and a victim with no recourse from the institutions of her society. In the community’s silence, in its failure to indict, the entire community becomes, of course, complicit.

Zagal adapted the novel by an award-winning contemporary French novelist Regis Jauffret and then added his own score.

The story begins in a subway as a professor finds himself drawn to an unknown woman. Very soon the attraction becomes an obsession. This goes on for years, the terror and abuse becoming a way of life for the couple. “It is a story of impunity,” according to Zagal.

But Historia de Amor “is a meditation on violence on many levels,” says actor Julian Marras, who is the predator in Saturday night’s performance. “Our hope is the work will be read as more than an exploration of gender or spousal violence.”

Both Zagal and the company’s art/multi-media director Laura Pizarro were adolescents during Chile’s military dictatorship, and witnessed its tactic of “disappearing” a great many of its real or imagined enemies. So that thread too is here.

But Marras sees still more. “Historia is an examination of an ancestral system of violence that we all continue to live by. It is about machismo, it is about socio-economic systems,” says Marras. “It is above all a tragedy.” Almost in the same breath, he talks of the anonymity of the large apartment building where much of the action takes place. “There is no mention in this story of the predator having known any love. There is no mention of a brother, a father or a mother. This story is no less his tragedy than hers.”