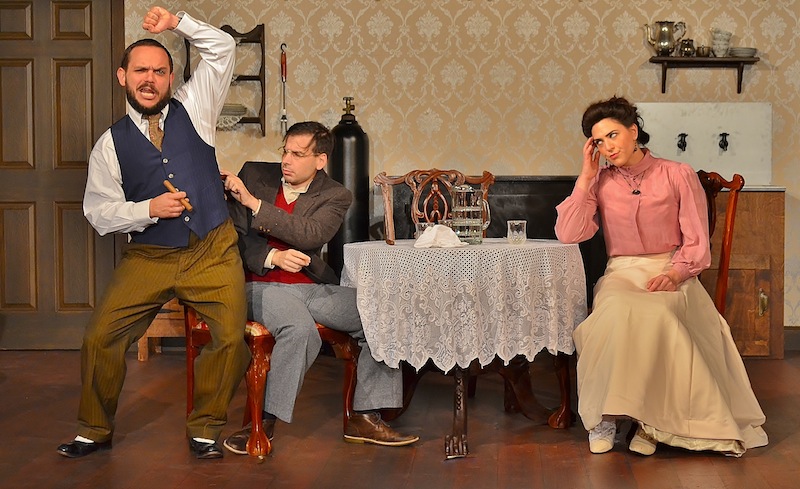 Whether the comedy is high or low, performer-writer Steve Martin has been making moviegoers, “Saturday Night Live” fans and theater lovers laugh for more than half a century – hard to believe it’s been that long, but he started early.

Martin’s way with both cerebral jokes and physical comedy is abundantly on display in “The Underpants,” his 2002 adaptation of Carl Sternheim’s once-banned 1911 play “Die Hose.” Running at the Main Street Playhouse in Miami Lakes through Oct. 22, the imperfect-yet-hilarious play literally leaves audiences screaming with laughter. And with one disaster after another these days, being able to laugh a little feels so good.

The igniting incident happens before the play begins: Watching a parade in Düsseldorf in 1910, young wife Louise Maske (Sheri Wieseman) stands on tippy-toe to try to catch a glimpse of the King as he passes by. Proving wardrobe malfunctions are timeless, her panties (bloomers, really) slip down around her ankles. Though Louise instantly dips down and removes them from view, everyone in the vicinity notices, to the utter mortification of her husband Theo (Michael Fernandez), a sputtering clerk who seems on the verge of stroking out.

Frank Versati (Steven A. Chambers) is an unpublished poet and a gentleman. Benjamin Cohen (Anthony Wolff) is a sickly barber who insists his last name is spelled “Kohen,” to stave off anti-Semitic backlash from Theo. Both men observed Louise’s panty plunge, and both are determined to woo and bed her.

Coaching Louise from the sidelines is her nosy upstairs neighbor Gertrude Deuter (Lucy E. Nuñez), who finds the idea of her pretty, put-upon friend having an affair quite stimulating. Two more prospective boarders (played by Murphy Hayes and Michael Cabal) get involved in the play’s waning moments, but the bulk of the comedy belongs to Louise, Theo, Frank, Benjamin and Gertrude.

Director Danny Nieves gets the strongest, most shaded and comedically assured performances from Fernandez, Wolff and Nuñez. Fernandez’s Theo is an apoplectic stuffed shirt in a fancy vest (the wonderful costumes are by Angelina Esposito). Wolff’s Benjamin seems to have an extravagantly cringe-inducing cold, and his deft physical comedy is straight out of the Martin playbook. Nuñez’s Gertrude has a way with a double entendre and appears to be as lusty as the gents who are pursuing her friend.

Poet Frank is supposed to be a Latin lover type, but Chambers plays him with polish as a sly, smart gentleman whose truest passion is for art and words. Wieseman’s Louise journeys from luminous innocent to potential boundary breaker to a woman who finally fully grasps the limiting societal/marital path stretching into her future.

With a fine period set by Amanda Sparhawk and Esposito, lighting by Sparhawk and sound design by director Nieves, whose contemporary music choices imply that the themes in Martin’s play transcend its era, the production brings the script to riotous life. Yes, “The Underpants” goes on too long and meanders toward its silly ending. But it’s a sunny, funny respite from all the doom and gloom in the world.