‘Cabaret:’ An Eerily Timeless Musical — For Our Times 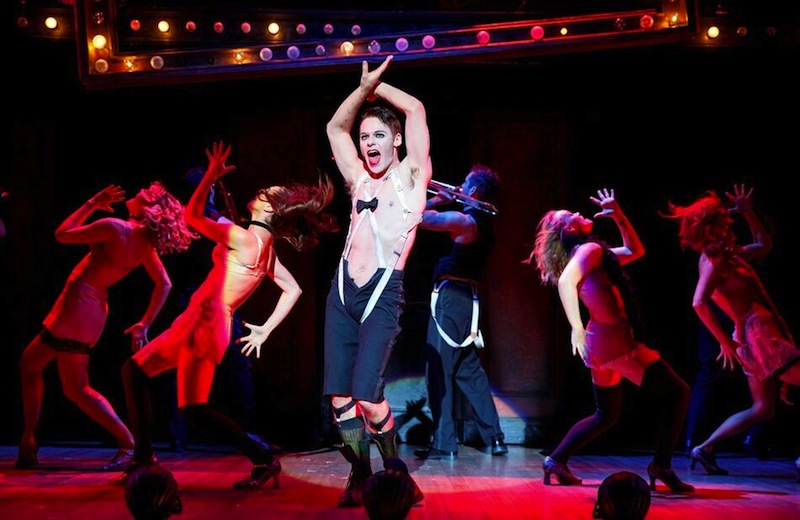 They live in a world of rancorous politics, anything-goes sexuality and escapist entertainment. A would-be leader and windy speechmaker fueled by anger and fear is poised to ascend. Still, many move through life with blinders on, certain that “normal” times will soon return.

Is this the United States in 2016? Arguably yes. But it’s also Germany in the waning days of the Weimar Republic, in the heady and dangerous and decadent Berlin of 1929-30. Willkommen, ladies and gentleman, to the world of Cabaret.

The Roundabout Theatre’s Tony Award-winning 1998 revival of the John Kander-Fred Ebb-Joe Masteroff musical is making a way-too-brief tour stop at Miami’s Arsht Center this week, showcasing another spin on the brilliant and inventive storytelling that director Harold Prince and his collaborators originally dreamed up in 1966.

This version of Cabaret, co-directed by Oscar winner Sam Mendes and director-choreographer Rob Marshall, lasted for six years and 2,377 performances on Broadway, returning for another 388 performances in 2014-15.

For the tour, director BT McNicholl and choreographer Cynthia Onrubia have a fresh cast of dazzling young talents and impressive veterans telling a sensuous, tawdry, moving story set against the heartbreaking backdrop of the Nazis’ rise to power.

Whether you have seen Cabaret once, many times or not at all, this touring company makes a compelling case for reviving the best Broadway musicals so that new generations of performers can interpret major musical theater roles. The show at the Arsht sports a killer cast – many are quadruple threats who act, sing, dance and play instruments in the Kit Kat Klub Band – but the most thrilling work of all comes from Randy Harrison in the key role of the Emcee.

Following in the Tony-winning footsteps of Joel Grey and Alan Cumming, the former Queer as Folk actor is a playful, sexy, aggressive and finally doomed guide through a world of pleasure and loss. He not only performs and keeps the entertainment flowing in the show’s Kit Kat Klub, but he also pops up at key moments – some comic, others chilling – in the book scenes. Harrison is a powerful singer who delivers superb renditions of Two Ladies, Money, the funny-then-chilling If You Could See Her and the haunting, torch-style I Don’t Care Much. Assured, sensuous and furious, the actor delivers a standard-setting touring performance.

Harrison is surrounded by topnotch talent, which also makes this Cabaret a must-see musical.

Andrea Goss is a waifish Sally Bowles, the devil-may-care chanteuse who fancies that headlining at the Kit Kat constitutes a career. Though Sally can be played as a second-rate talent, Goss has the pipes to let listeners imagine that (as she sings) Maybe This Time the showbiz fairytale running in Sally’s head will come true.

Lee Aaron Rosen is dashing as Sally’s deluded, bisexual lover, the American writer Cliff Bradshaw. Ned Noyes is perfectly amiable and charming – for a time – as the shifty Ernst Ludwig. Shannon Cochran as Cliff’s landlady Fräulein Schneider and Mark Nelson as her Jewish fruit vendor beau Herr Schultz play out one of the most heart-wrenching relationships in Cabaret. As the busy boarder Fräulein Kost, Alison Ewing plays the accordion, sings the stirring and disturbing Tomorrow Belongs to Me and “entertains” many a sailor with equal finesse.

This take on Cabaret, it should be noted, isn’t for everyone; at times, it can seem almost relentlessly hypersexualized. It’s a long show (the first act is 90 minutes), and the minimalist staging of its book scenes is in deliberate stark contrast to the razzle-dazzle of its cabaret numbers. At Tuesday’s opening, some in the audience reporting having a tough time deciphering lyrics during the first act, though the sound mix got better in the second.

Still, among Broadway shows, Cabaret is one of the greats. And so is this touring version of a musical that remains entertainingly, disturbingly timeless.