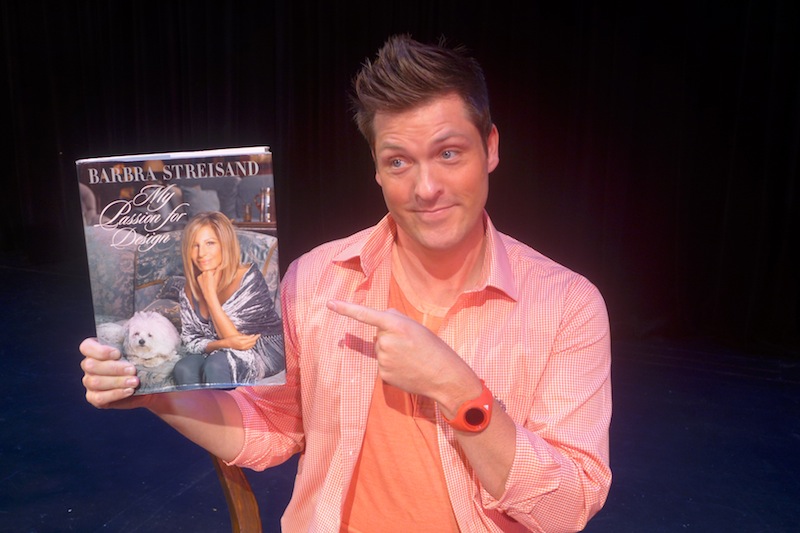 As ideas for plays go, the notion behind Jonathan Tolins’ ‘Buyer & Cellar’ sounds kooky and more than a little improbable.The setup is that megawatt star Barbra Streisand has an Americana-inspired collection of shops in the basement of her movie set-worthy red barn on her Malibu estate. And that an out-of-work gay actor gets a mind-blowing gig when he’s hired to man the diva’s quaint street of dreams five days a week just in case the lady of the house decides to do some “shopping.”

Connoisseurs of all things Streisand know that, while the actor-as-clerk idea comes from Tolins, the star really does display her collections of costumes, dolls and such in vintage-looking shops in her basement. See her 2010 coffee table book My Passion for Design for proof.

Working on a simple, nearly unadorned set with projections supplying the window into Streisand’s expensively tasteful world, Crawford chiefly plays Alex More, an actor and theme park veteran whose off-color comment while in character got him fired (the Orlando-based Crawford knows that world first hand).

After beginning with a disclaimer that the events in the show are made up – Tolins’ attempt to keep a Streisand lawsuit from happening – Crawford’s Alex proceeds to beguile us for 90 minutes or so with his glimpse into the world of celebrity and fantasy.

Dressed by costume designer Ellis Tillman in a coral cardigan and shirt, tan trousers and the 21st-century version of saddle shoes, Crawford quickly works up a sweat as the jokes, observations and quick character changes flow fast and furiously. He delivers both sides of increasingly acrimonious conversations between Alex and Barry, the latter a steeped-in-Streisand devotee who becomes critical of the star’s seeming inability to get over her emotionally and financially deprived Brooklyn childhood.

Evoking Streisand rather than impersonating her, Crawford also charts the evolving relationship of Alex and his employer, who initially tells him to call her Sadie as she stubbornly haggles over the price of a doll she already owns.

Alex the actor and Streisand the actor become closer through their own underground mall version of improv, though whenever Alex relaxes into a notion of blossoming friendship, his boss does something that underscores the improbability of a diva genuinely making friends with the help.

Director David Arisco astutely guides the handsome Crawford into and through Tolins’ fantasy, helping the performer fully realize the abundant laughs, the conflicts and the touching moments in the script.

The situations and conversations in Buyer & Cellar may be fictitious, but the play and Crawford’s thoroughly engaging performance are absolutely real – and completely delightful.