‘Building the Wall’ Has Message Stronger Than Bricks and Mortar 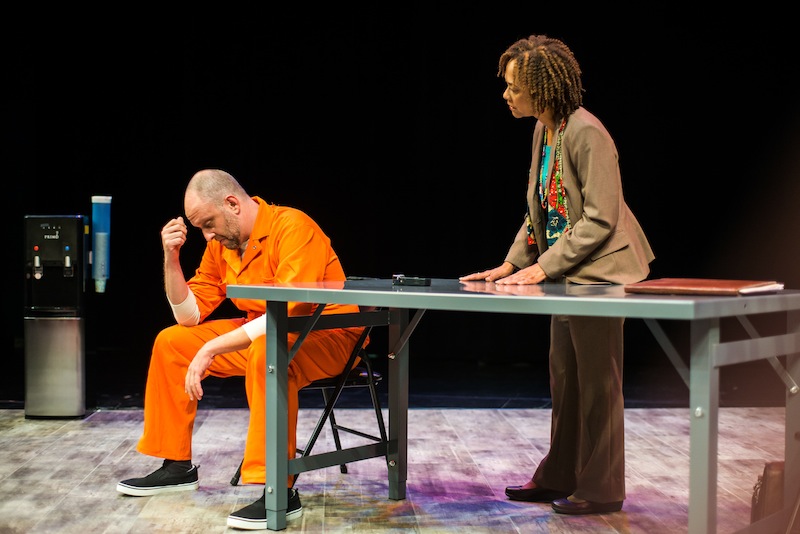 For 90 minutes, the two talk. She probes; he explains and justifies and slowly paints a picture of a man-made Seventh Circle of Hell. By the time the play ends, the audience is shocked and thinking about just where authoritarian rule in the United States could lead. Which is exactly what Schenkkan intends.

Written before the election that sent Donald Trump to the White House, “Building the Wall” is now getting its Miami debut in a City Theatre production at the Arsht Center’s Carnival Studio Theater. Hurricane Irma truncated the beginning of its run, so you have only until Oct. 8 to watch Carbonell Award-winning actors Gregg Weiner and Karen Stephens face off in an intense play that explores what should be unimaginable – though in America’s volatile political climate, the far-fetched seems to be moving ever closer.

Pulitzer Prize winner Schenkkan, who was at his play’s opening performance and spoke eloquently about it in a post-show talkback, imagines an American tragedy only a couple of years into the Trump presidency. A terrorist attack in Times Square has led to the imposition of martial law. Trump himself hasn’t fared well and has retreated to one of his many golden palaces.

Now Rick, part of the “solution” to the country’s illegal immigration “problem” when he ran a private prison outside El Paso, finds himself wearing an orange jumpsuit and facing death. Having stayed silent at trial on his defense lawyer’s orders, Rick has chosen to explain himself to a historian, thinking maybe – just maybe – his heartbroken wife Stacey will understand why he did what he did. And maybe she’ll finally look him in the eye again.

Rick and Gloria are characters, yes, but they’re emblematic of the divide in the red state/blue state mindset. Rick is bright but not highly educated, a former military man who found candidate Trump’s anti-immigrant rhetoric and appeals to white Christian pride “electric.” Gloria the professor, who first encountered soul-shredding racism at the age of six, pushes back, trying to figure out how the hell Rick and his brethren so quickly surged to prominence and deadly power.

Staged by Margaret M. Ledford in a nearly barren playing area that gets as much of its prison atmosphere from Matt Corey’s sound design as it does from curls of Concertina wire overhead, City’s “Building the Wall” is propelled by the powerful performances of its two gifted actors.

Steeped in a Texas drawl, Weiner’s words never ring false – his Rick believes what he’s saying, believes that the confluence of political and corporate pressure left him with no real options except for the one that took him down a dark road straight into hell. Stephens smiles at first as Gloria coaxes and cajoles Rick into getting real, then becomes the audience’s proxy as the horror contained in his words coalesces into a devastating resurgence of incomprehensible inhumanity

Schenkkan wrote his play quickly, and while it doesn’t have the polish of his long-gestating “The Kentucky Cycle” or “All the Way,” the script sounds an urgent alarm. “Building the Wall” urges us to pay attention, speak up and remember that a democracy is a government of the people, by the people and for the people.

Talkbacks: 9 p.m. Thursday, “The Current Reality of Immigrant Detention and Deportation in the United States and How the Southern Poverty Law Center is Fighting Back;” 9 p.m. Friday, “South Florida Immigration 101;” 4:30 p.m. Saturday, “Know Your Rights on Organizing to Organize;” 4:30 p.m. Sunday, “Inside/Outside: Both Sides of Immigration.”