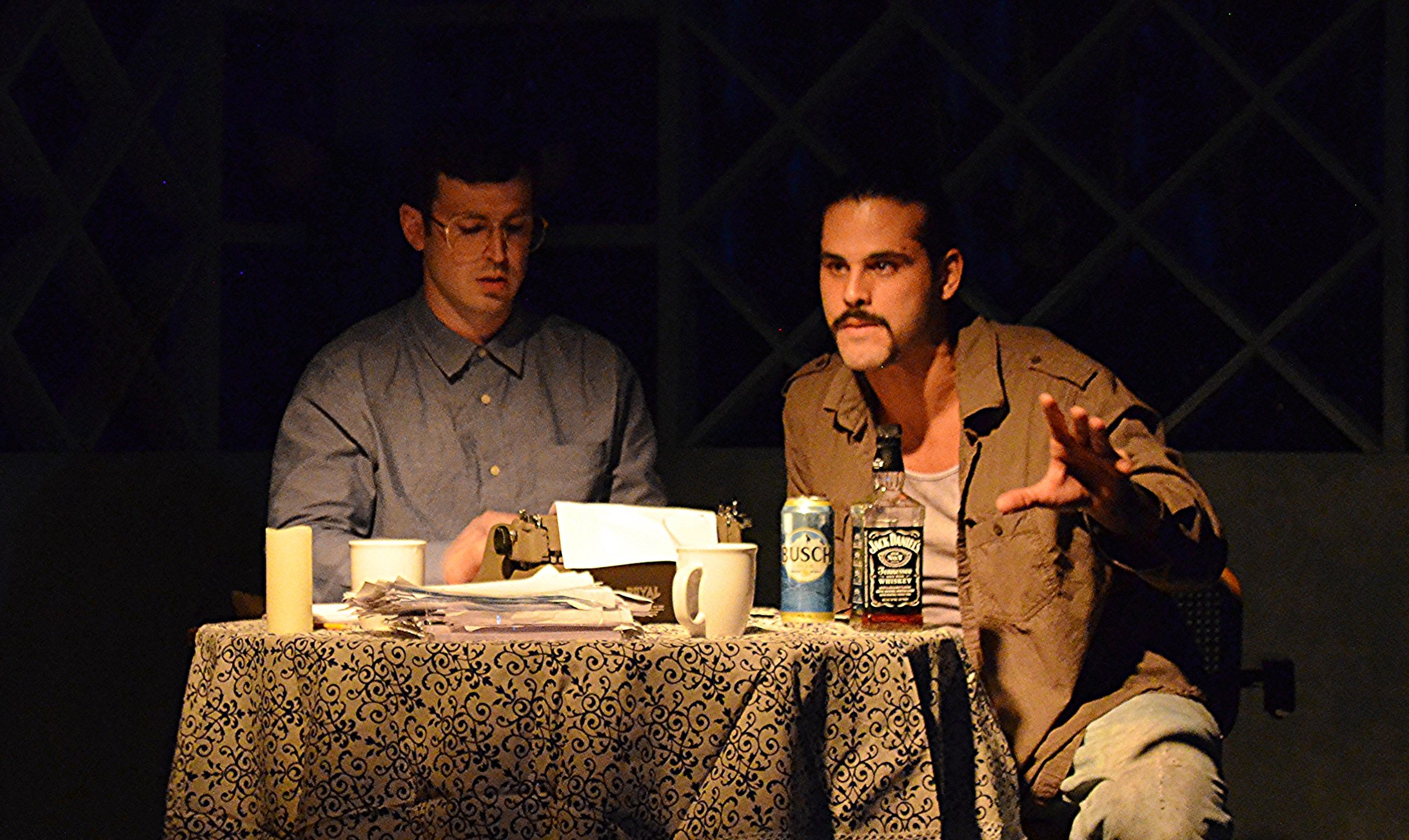 Sibling rivalry is the engine that has powered many a play, but the ride that playwright Sam Shepard devised in his 1980 work “True West” is among drama’s wildest.

To close out its 2018-19 season, Main Street Players in Miami Lakes has just opened a new production of “True West.”  This version has virtues and flaws, but ultimately Shepard’s insightful, dark, funny play wins out.

“True West” plays out in a modest suburban home 40 miles east of Los Angeles in the 1980s.  Austin (Tyler Grimes), an Ivy League-educated screenwriter, has left his wife and kids at home in northern California in order to get in some quality writing time at his mom’s house while she’s vacationing in Alaska. But his solitude is short-lived, thanks to the inconvenient appearance of his older brother Lee (Christopher Millan).

Lee, from the backgrounding material woven into the script, would seem to be similar to the father who abandoned his wife and sons. Like “the old man,” he’s a destitute heavy drinker who prefers life in the less-populated desert to the idealized scenes he views through the picture windows of houses he’s casing as targets for break-ins.

Initially, Austin is annoyed that the brother he hasn’t seen for five years has shown up to shatter his concentration. He’s also justifiably intimidated by the larger Lee’s vocal and physical aggression; you sense that Lee, if he wanted to, could snap Austin like a twig.

Then, Shepard begins working his magic.

When movie producer Saul Kimmer (Kent Harris) shows up to meet with Austin, he’s taken with Lee’s pitch for a contemporary western – and with Lee himself.  Lee hustles Saul over a game of golf, and suddenly the tables are turned. Lee has the power (if not the skills to write a screenplay), and Austin’s project gets shoved aside.  The sibling rivalry gets amped up, uglier, violent.

At Main Street Playhouse, director Isaac Polanco’s production is buzzy and boisterous.  There are quiet moments when Grimes (the actor doubles as the show’s sound designer) supplies a chorus of chirping crickets or the distant howls of suburban coyotes, but ominous loud music is threaded throughout the show. 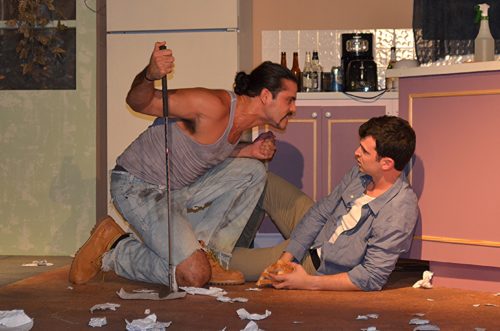 The brothers’ physical fights, coordinated by Danny Mitan, are so convincing that you start to worry that the actors or props will come flying off the stage and smash into people in the front row.  On opening night, Millan took one particularly rough fall, and afterwards his bleeding knee was visible through the rip in the right leg of his jeans (costumes are by Angelina Esposito, lighting and the gradually messed-up set by Amanda Sparhawk).

As for the performances, although Millan arguably has the showier role, Grimes pulls off the more impressive journey from bookish screenwriter/family man to an unhinged guy who might just be capable of fratricide.  Grimes’ work is full of small, telling moments. Millan, on the other hand, begins the play bellowing at an ear-splitting level and forcing an unconvincing accent, and he largely plays Lee as a violent lout, so much so that Saul’s shift to Lee and his movie idea seems incomprehensible.

Nonetheless, Harris is effective as Saul, and Carol Sussman has some choice comic moments as Mom, who returns early from Alaska only to find her house trashed, her plants dead and her grown-up “boys” fighting to the death in her kitchen. 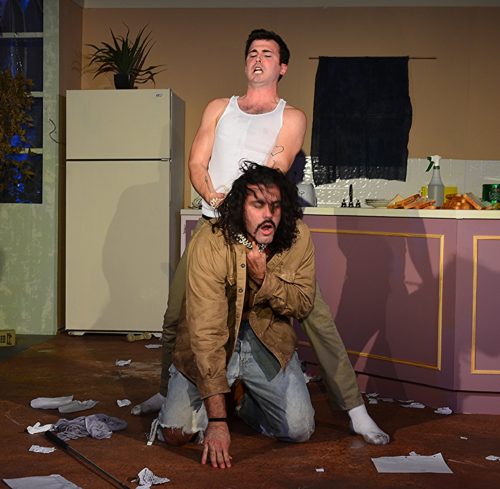 Speaking of which:  The between-scenes transformation of the set, in which two stagehands visibly and robotically replace healthy plants with dead ones, then toss crushed beer cans and wads of paper all over the floor, is just plain bizarre.  It’s much funnier and more effective if that change happens during a blackout.  Really.