‘Brothers of the Dust:’ Family Reckoning at an Arkansas Farm 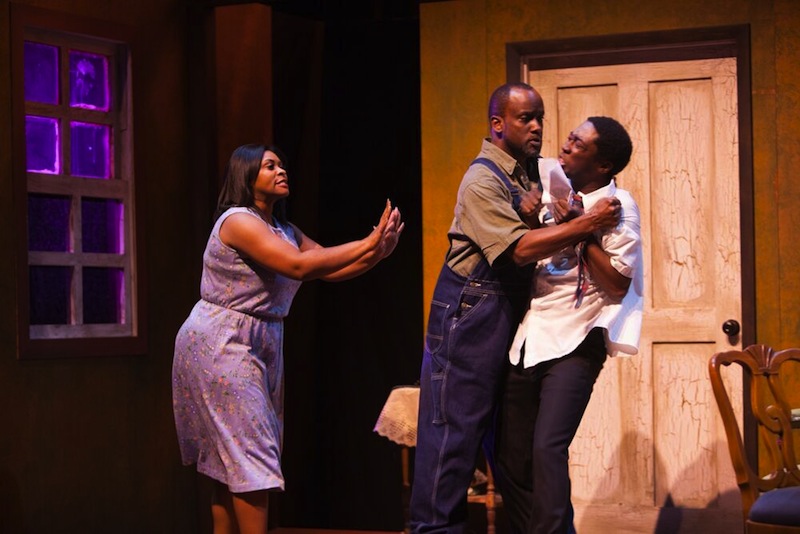 Miami’s venerable M Ensemble is a company that sometimes dips into its rich history to mount fresh productions of past shows.

For its second production in its versatile new home at the Sandrell Rivers Theater in Liberty City, the troupe is revisiting Darren Canady’s “Brothers of the Dust.” Winner of the 2012 M. Elizabeth Osborn Award from the American Theatre Critics Association, the play has been professionally produced just once since its world premiere at Chicago’s Congo Square Theatre – by M Ensemble in 2014.

Hoping to take the show to the National Black Theatre Festival in Winston-Salem, North Carolina, this summer, M Ensemble has circled back to Canady’s explosive drama about an extended black family in rural Arkansas. Laced with humor and juicy revelations, “Brothers of the Dust” is in the tradition of August Wilson’s “The Piano Lesson” or Arthur Miller’s “The Price,” plays in which an inheritance ignites a family reckoning.

André L. Gainey has returned as director, and actors Keith C. Wade and Roderick Randle are back as, respectively, stubborn farmer Roy Colton and his bright son Jack. Otherwise, five new actors get their chance to interpret Canady’s rich characters.

“Brothers of the Dust” is set in 1958 on the barely surviving Colton family farm outside smalltown Conway, Arkansas.Brothers Roy, Wilson (Devon Dassaw) and Ollie (Marquise Rogers) all inherited the farm from their late parents, but Roy is the only brother who stayed, obsessively barely eking out a living for himself, his wife Mayetta (Rita Joe) and Jack.

Wilson and his comically greedy wife Nella (Carey Hart) have devoted their recent years running a store in a larger town, spending themselves into near bankruptcy. Youngest brother Ollie, a writer who reveres Langston Hughes, has come home from Chicago with his editor and current lover Audra Thorpe (Athena Lightburn) in tow, though he’s actually on the run after an imprudent affair.

Fireworks erupt and keep going off after Wilson reveals the reason he and Nella have come back to the farm after seven years away: Standard Oil is looking for black gold in the area, and he wants to sign the paperwork to let the company survey the farm.

He envisions a huge payday that will benefit all three brothers and forestall that bankruptcy. By dint of the blood, sweat and tears he has invested in the farm, Roy has come to view the house and land as his alone. He’ll give it up only over his – or someone else’s – dead body.

Having reconfigured the black box space from its gym-like setup for its previous show “Kings of Harlem,” M Ensemble and its designers have created a more traditional environment for “Brothers of the Dust.” With the audience seated on a large riser facing the floor-level set, Mitchell Ost has designed a worn, modest farmhouse with an attached porch, then “painted” the sky with a shifting blaze of color. Music of the era threads the scenes together, and Shirley Richardson’s costume choices evoke everything from big-city style to dust-covered country clothes.

Under Gainey’s guidance, the actors dig deeply into their pithy characters. Wade is alternately volatile and taciturn as Roy, a man whose devotion isn’t always readily apparent. Rita Joe’s Mayetta is a lonely peacemaker who sees the fields surrounding her home as a formidable rival for her husband’s affections. Randle’s Jack, on the verge of manhood, seesaws from obeying his father to insisting on the future he sees for himself.

Dassaw’s Wilson is determined and calculating, pushed harder into his avaricious sneakiness by Hart’s Nella, for whom sniping is as natural as breathing. Rogers plays Ollie’s sensuality with an understated allure, and Lightburn makes Audra a snooty beauty.

Jam-packed as it is with surprises, twists and turns, “Brothers of the Dust” moved some in its opening night audience to deliver a running commentary, talking back to the characters, judging them, going “ooh” and “aah” when a guy and a gal crossed a line. Speaking of crossing lines: It’s a good thing to be emotionally engaged in a play. But it’s not so hot when conversation rises above a murmur, gets raucous, then competes with what the actors are trying to deliver.