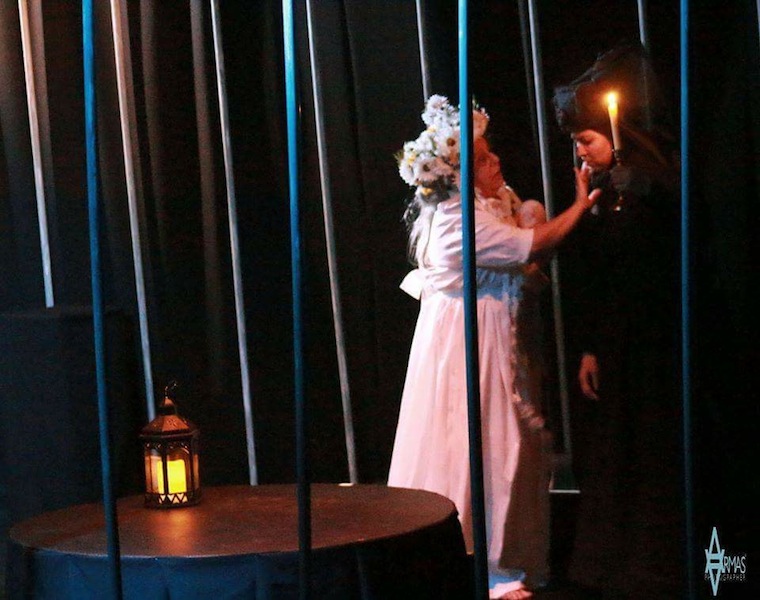 Debuting its new space in the Bird Road Arts District, Havanafama Teatro Estudio kicks off its season with Bernarda, Juan Roca’s adaptation of Federico Garcia Lorca’s play, La Casa de Bernarda Alba. Performed in Spanish, Bernarda is about a widow who rules her home with an iron fist. Her five daughters are not allowed to leave the house or have relationships with men, and Bernarda has imposed an eight-year period of mourning on them. When her oldest daughter Angustias inherits a large sum of money, bachelor Pepe el Romano begins to court her. At the prospect that one of the sisters may get married, the others explode with jealousy, resentment, and in the case of the youngest sister Adela, lust.

As in Lorca’s original, Bernarda deals with themes of classism, authoritarianism and repression. However, this production shines a particular spotlight on feminine rage and women’s deep-seated desires. Roca, who also directs, injects a primal undercurrent just beneath the surface of the solemn, buttoned-up façade and the result is intriguing.

One punctuating aspect is the use of costume. The women wear the heavy black gowns and mantillas associated with old world Spain and mourning. In the beginning of the play, each daughter wears a mask under her veil and is shirtless. Revealing their breasts beneath the black veils is a subtle and innovative way of underscoring the vulnerability and sensuality of each woman; as Poncia, the housekeeper, later says, referring to the sisters’ unchecked desires, “There’s a storm in each room . . .” When the actresses turn there’s another mask, symbolizing the idea of the double lives of repression and desire they must lead.

In the small kingdom of Bernarda’s house, Bernarda rules, but we are constantly reminded that men ultimately preside over the world of women. It is an interesting choice then that Bernarda is played by a man (Isaniel Rojas). Julie De Grandy is excellent as Bernarda’s opinionated housekeeper Poncia, and between the two a sharp-witted banter keeps the play moving forward.

The sisters are ensnared in a relationship of jealousy and resentment and the actresses deliver performances that powerfully convey their thorny emotional entanglements. In particular, Karina Domínguez vividly portrays an embittered and wounded Martirio. Ivette Kellems’ Angustias, the oldest sister who is engaged to Pepe el Romano, is irritable and dour. In contrast, Tamara Melián delivers a passionate, rebellious younger sister Adela, who it is implied is conducting an illicit sexual affair with Pepe.

Occasionally, Bernarda’s symbolism is heavy handed. The most striking example is of a naked man wearing a centaur’s mask and simulating sex with Adela. The concept of Adela releasing her primal urges is a fascinating proposal, but the centaur’s full frontal nudity and gyrations leave little to the imagination. That said, Roca’s attention to the daughters’ primal longings and desires makes Bernarda a unique and intriguing production.