‘Be More Chill’ brings Area Stage to the Arsht Center 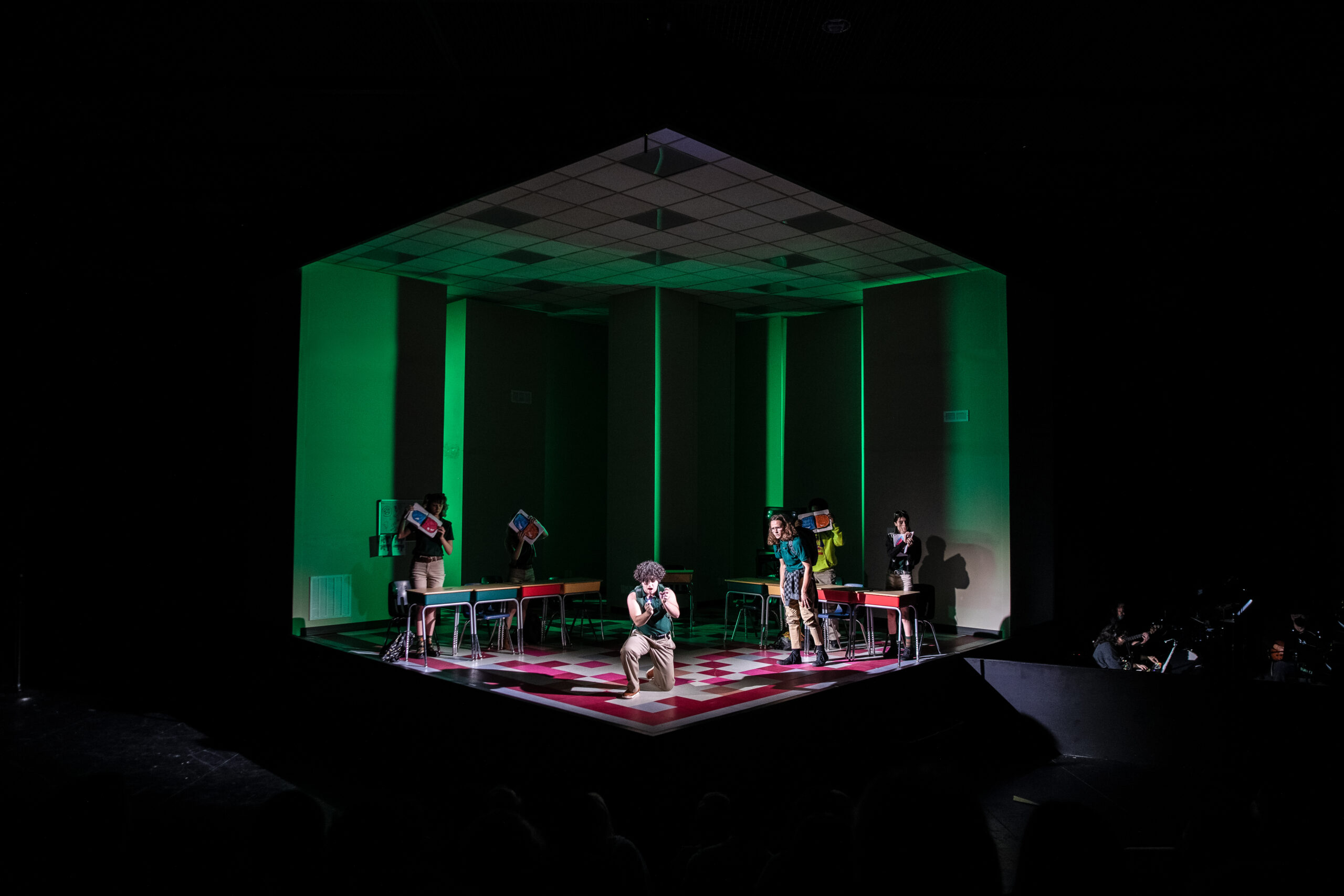 Ah, the teen years. Navigating that fraught passage from childhood to adulthood has never been easy. For many kids, it’s a journey filled with emotional land mines: grappling with identity, popularity, intimacy and more.

That’s the thematic heart of “Be More Chill,” a musical getting its South Florida premiere in an Area Stage Co. production at the Arsht Center’s Carnival Studio Theater.

Since its 1989 founding by John Rodaz and Maria Banda-Rodaz in a former Lincoln Road shoe store, the pioneering Area Stage has grown into a company that has educated and showcased aspiring young talents via its extensive conservatory programs while also producing professional adult theater. In June, an immersive and widely acclaimed “Annie” in the company’s space at The Shops at Sunset Place in South Miami set off a fresh buzz about Area Stage and its young associate artistic director, Giancarlo Rodaz, who reimagined and directed the show.

The younger Rodaz, John and Maria’s son, is again at the helm as Area Stage makes its Arsht Center debut with “Be More Chill,” through Feb. 27. Although becoming an arts partner at Miami’s major performing arts facility carries some financial risk for Area Stage, selectively producing key shows there can also bring a new and broader audience plus greater visibility for the company’s work. That’s exactly what “Be More Chill” is intended to do.

Though one could quibble with the choice of this particular show (more on that in a moment), director Rodaz, his Area Stage team and the cast do their usual fine job in bringing it to life and connecting with an enthusiastic audience – especially with coveted, sometimes hard-to-reach younger theatergoers. “Be More Chill” developed a massive social media fan base as it was progressing from its first regional production in 2015 to a Broadway run in 2019, so its Miami debut doubtless comes with an avid built-in-audience. 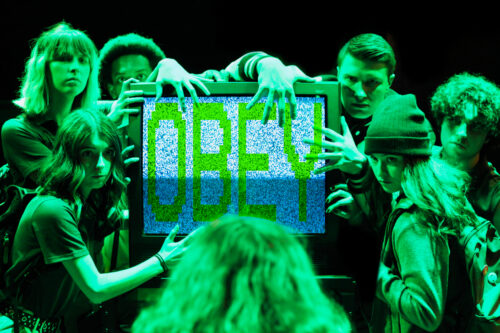 Based on a 2004 young adult novel by Ned Vizzini, “Be More Chill” is the work of two guys named Joe: composer-lyricist Joe Iconis and book writer Joe Tracz. It clocks in at a too-hefty 2½ hours, but it does have many moments that elicit pings of recognition in young or formerly young theatergoers. Truth be told, it simply isn’t in a league with deeper shows such as “Spring Awakening” and “Dear Evan Hansen” (which makes its Miami debut at the Arsht’s Ziff Ballet Opera House on Feb. 15-20) or fizzier fare like “The Prom” and “Mean Girls.”
Even so, there’s plenty to laugh at, cringe at or be moved by in Area Stage’s “Be More Chill,” thanks to Rodaz’s astute handling of meaningful moments and the work by the cast, a mixture of actors from South Florida and the New York area.

Blending teen angst with sci-fi that doesn’t seem all that improbable, “Be More Chill” follows the misadventures of Jeremy Heere (Teddy Calvin), a lanky high school junior with a mop of long hair and a curved posture that makes him look like he’s trying to fold himself in half.
Lonely since his mom left him and his dad (Michael Vadnal) behind, Jeremy is constantly embarrassed by his out-of-it father, whose favorite at-home look is an open robe, an undershirt and tighty whities. Playing video games with his best pal, Michael (Aaron Hagos), brings Jeremy his only real joy and escape from the nightmare that is the rest of his life.

At the suggestion of Rich, who turns out to have a secret behind his cool-kid status, Jeremy downs something called a SQUIP (Super Quantum Unit Intel Processor), a pill-sized computer that implants itself in his brain and advises him on every move that can change him from hopeless nerd to magnetic hottie.

With music director Rick Kaydas and the band delivering a score full of rock and show tunes, the actors shine vocally as a group and in key solos. 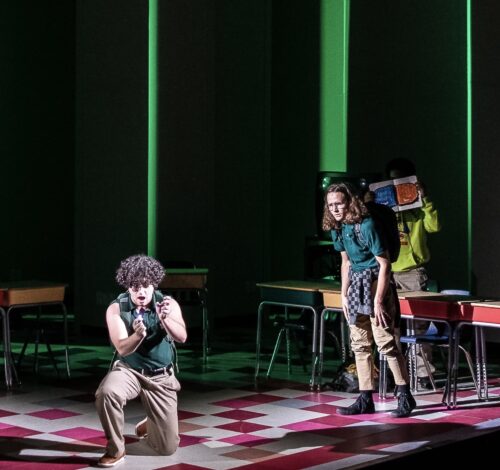 Barsness embodies the committed passion of every theater kid when she sings “I Love Play Rehearsal.” Calvin morphs from tormented misfit to a guy with a more powerful voice and an appealing confidence, though his “new” Jeremy never seems quite as much a mean boy as the show’s creators probably intended. Duerr has some masterful comedic moments when she sings “Do You Wanna Hang?” to Jeremy, then proceeds to come on to him while costumed as a baby for a Halloween party. Hagos delivers a wounded, moving “Michael in the Bathroom” after one too many hurtful encounters with his now-former best bud.

Surretsky gets to do a reverse Jeremy as Rich, rocking out on “The SQUIP Song,” then much later changing drastically into the very different guy he was before the SQUIP got into his head. Enzo Everett is a hoot as drama teacher Mr. Reyes, whose other job is at Hobby Lobby, and Frank Montoto has just the right amount of scary edginess as a SQUIP purveyor who sells his product out of the stock room at a Payless store (lots of store name dropping in this show). Vadnal is playing a depressed, stuck guy as Jeremy’s dad, and maybe he does too good a job – the effect is kind of meh.

Frank J. Oliva’s set is a flexible version of a high school classroom, complete with linoleum floor, easy-to-move desks (and walls, the better to allow the cast to dance to Irma Becker’s choreography) and a deliberately institutional look. The lighting by Cheyenne Sykes helps alter the environment so that “school” changes into a brightly colored party place, or so that it reflects the effect that green and red Mountain Dew is having on the students (see the show if you want to get that bit).

Costume designer Rebecca Levovitz supplies the school uniforms but gets creative with outfits for the school play and the fateful Halloween party. Director Rodaz also devised the sound and video design, balancing the floor-level musicians with the singing actors on the elevated stage, and creating videos with other-worldly sound and images to help the audience get inside Jeremy’s SQUIP-controlled brain.

Having Area Stage join Zoetic Stage and City Theatre as another South Florida theater company producing work at the Arsht is a welcome move. And if you see “Be More Chill,” you’ll grasp why Area Stage belongs there, whether or not this particular show is your kind of entertainment experience.