‘Baño de Luna’ Of Church and the State of Earthly Love 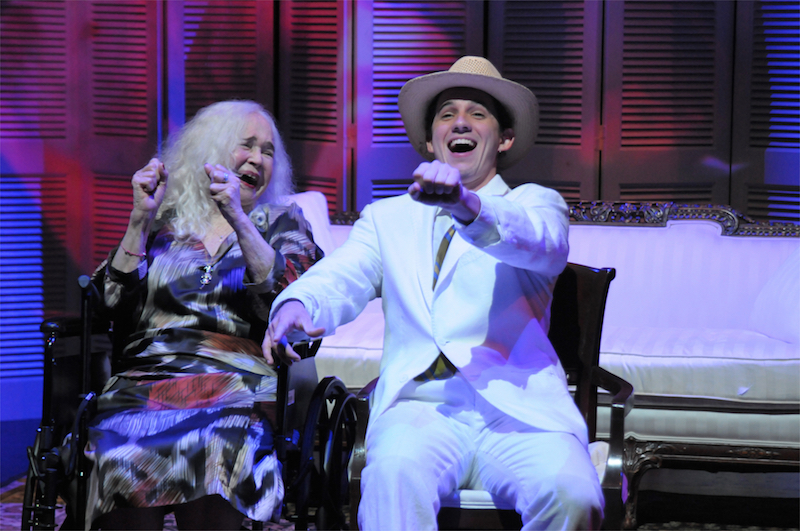 “Baño de Luna,” written and directed by Pulitzer-prize-winning playwright Nilo Cruz and presented by Arca Images and the Miami-Dade County Auditorium, marks the debut of the Spanish-language version of “Bathing in Moonlight,” the original English production that debuted at the prestigious McCarter Theatre Center in Princeton, N.J., in 2016.
Performed by a stellar cast in Spanish with simultaneous audio translation in English through Sunday at the Miami-Dade auditorium, “Baño de Luna” opens with a telling anecdote. Father Monroe, a Catholic priest in his forties, shares a story with his congregation about three soldiers who attempt to bury their fallen friend on the grounds of a Catholic church. The priest won’t allow it because no one knows if the deceased soldier has been baptized or not, so the man is buried outside the church grounds. When the soldiers return to visit the gravesite, they learn that the priest regretted his actions and extended the boundaries of the churchyard to include the soldier’s grave.
Father Monroe (impressively portrayed by Ariel Texidó), stares intently at the congregation and proclaims: “It therefore makes sense for us to remove all fences in life through warmth, kindness, charity, liberality, generosity, so we can find our way to the house of the Lord.” This foreshadows one of the play’s central themes and Father Monroe’s dilemma: what are the limits of love and how does one reconcile human love with the limits that religious devotion exacts?
On the surface, “Baño de Luna” is the story of a church scandal. Father Monroe falls in love with his parishioner, Marcela (Claudia Valdés), and must choose between his sacred commitment to the Catholic Church and his newfound discovery of earthly love. Father Monroe’s predicament is much more interesting as a spiritual and existential crisis than it is as a moral one, and Texidó plays out the priest’s struggle with nuance. Furthermore, Valdés’ performance as a single mother – out of work and overburdened with financial problems and the responsibility for her aging mother – is subtle and emotionally rich.
The other powerful dramatic element in “Baño de Luna” is the story of a Cuban family in exile. When Marcela’s ne’er-do-well brother Taviano (Joel Hernández Lara) shows up, each family member must contend with the consequences of Martina (Teresa María Rojas), the family’s matriarch, and her desire to replicate the upper-class life she enjoyed in Havana versus the reality of a cash-strapped immigrant’s life in Miami, not to mention the toll these expectations exacted on her late husband and her children.
In the role of Martina, the ineffable talent of Rojas shines. She portrays Martina’s complexity – her sassy sense of humor, ephemeral dreaminess, and ferocious passion — to a tee. It’s a perfect farewell performance for Rojas, who is retiring after 50 years of an iconic presence in the South Florida theater scene.
Hernández Lara is the only odd casting choice, as Martina’s son Taviano and as her late husband in a few dream sequences. The actor looks to be in his early twenties; yet, we are supposed to imagine him as a man at least a decade older. Despite this quirk, Hernández Lara delivers a convincing performance of a confused, volatile young man.
The cast is rounded out with strong performances by Andrea Ferro as Marcela’s idealistic daughter and Carlos Acosta-Milián, who plays Bishop Andrews, Father Monroe’s mentor and superior. It is through the scenes between the priest and the bishop that we experience the complexity of Monroe’s love for Marcela and the church — and his refusal to accept these loves as mutually exclusive.
“Baño de Luna,” presented by Arca Images and Miami-Dade County Auditorium, On.Stage Black Box Theater, Miami-Dade County Auditorium, 2901 W. Flagler Street, Miami. Through August 13, Thursday through Saturday at 8:30 pm, with an additional matinees on Saturday and Sunday at 5:00 pm; Info: $25 general admission, $20 seniors and groups (10+); $15 students. In Spanish with simultaneous audio translation in English; arcaimages.org or miamidadecountyauditorium.org; call 786 327 4539.