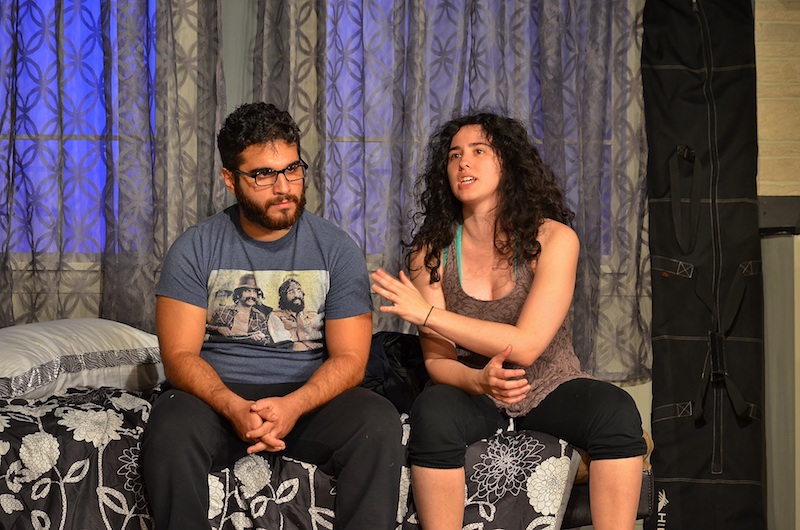 The combatants are Daphna Feygenbaum (Hannah Benitez), a soon-to-be Vassar grad who plans to move to Israel, marry a man no one in the family has met and become a rabbi, and her cousin Liam Haber (Joseph Paul Pino), a master’s degree candidate and atheist who intends to propose to the Christian girlfriend he met on Match.com.
His beloved Melody (Kimmi Johnson), once an aspiring opera singer, and Liam’s quietly observant brother Jonah (Matthew Ferro) frequently become collateral damage as Liam and Daphna go at it. Given the cousins’ verbal and intellectual dexterity, a studio is way too small for their scorched-earth personalities.
“Bad Jews,” which debuted Off-Broadway in 2012, premiered in South Florida at GableStage in 2014, earning Carbonell Awards for the actors playing Daphna and Jonah. Now the warring cousins are at it again, this time in a production by Main Street Players in Miami Lakes.
Harmon’s play, which gets the audience screaming with laughter and gasping at its brutal verbal assaults, will feel uncomfortably familiar to anyone who has done battle over a family heirloom. In this case, it’s the Chai medallion that belonged to the cousins’ recently deceased grandfather, a Holocaust survivor they called “Poppy.”
Daphna wants the Chai, a Hebrew symbol signifying life, because of her deep immersion in Jewish culture and its storied family history. Liam has claimed it because their then-struggling grandfather used it to propose to their grandmother. Though Poppy’s grandson has turned his back on Judaism to embrace world culture, the sentiment and legacy represented by the medallion make Liam determined to have it.
Because the characters in “Bad Jews” are current or recent college students, the play can be a wonderful showcase for younger actors, as it was at GableStage and is at Main Street Playhouse. Director Robert Coppel has cast two recent New World School of the Arts grads as the brothers, and both Pino and Ferro are noteworthy in their professional debuts. Benitez, who is also an experienced musical theater performer and playwright, and Johnson, an educator-choreographer who has multiple credits in musicals, deftly bring two women who couldn’t be more different to life.
Benitez and Pino have the showiest roles, and in the claustrophobic confines of Amanda Sparhawk’s set (a cozy place that says “extra apartment,” not “loads of money”), the actors explore and exploit all the themes and subtext in Harmon’s smart dialogue.
Benitez’s naturalistic delivery suggests that Daphna, vicious on the surface and wounded underneath, is living in the conflict-ridden moment. As per the script, she is forever picking at and fussing with her unruly mop of dark hair, dropping strands of it all over the apartment, grossing out Liam (and probably some audience members).
From the get-go, Pino’s Liam runs hot. He can’t stand Daphna, and her judgmental sniping makes him crazy. In truth, he’s every bit as nasty as his cousin, just a lot louder. If she’s a stealth missile, he’s an atomic bomb.
Johnson winningly plays the kind, decent woman understandably made nervous by her boyfriend’s outbursts, and she’s hilarious as she unintentionally demonstrates why Melody never would have made it in opera.
Ferro has the least dialogue and a tough role. Jonah is most often an observer, not a participant, and initially he seems a cipher. His attempts to stay neutral in the matter of the Chai make him understandably jittery, but his laughter at a shared family memory and a deeply meaningful gesture revealed at the end of the play reveal him to be much more than a silent guy who sits around in his underwear playing video games.
One nitpick about the about the Chai used in the production: It’s so large that a story about how Poppy managed to keep it safe during the Holocaust isn’t believable. But the specifics of that story, as well as the fiery family conflict and abundant laughs of “Bad Jews,” are well worth discovering.
‘Bad Jews,’Main Street Playhouse, 6766 Main St., Miami Lakes; 8 p.m. Friday-Saturday, 2 p.m. Sunday, through Aug. 13. Cost: $30 ($25 for students, seniors and military personnel). Information: 305-558-3737 or www.mainstreetplayers.com.