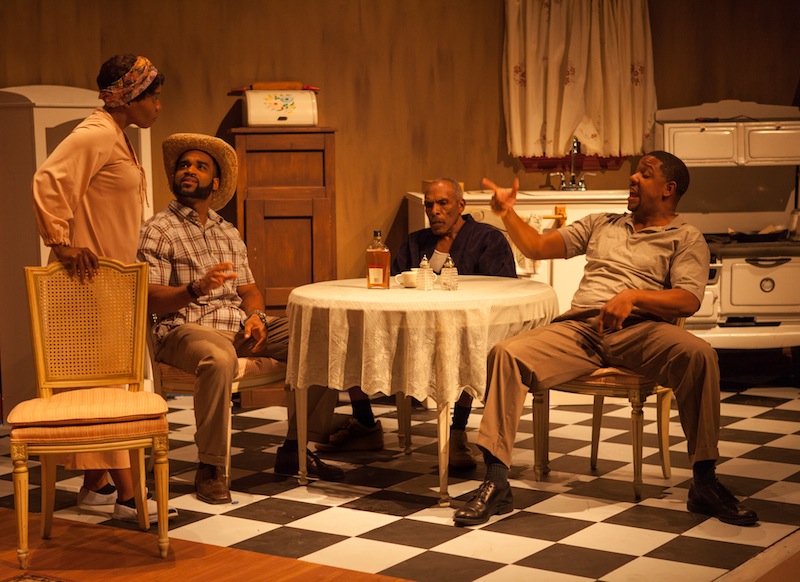 That a black troupe would want to explore the entirety of Wilson’s examination of black life in each decade of the 20th century isn’t surprising. The two-time Pulitzer Prize-winning playwright was a brilliant artist with a singular voice, blending vernacular language and his own style of stage poetry.

M Ensemble has returned to one of Wilson’s Pulitzer winners, The Piano Lesson, and will again produce the other (Fences) after its planned move into a new theater at the Seventh Avenue Transit Village Project in Liberty City this spring.

Like the works of William Shakespeare or Tennessee Williams, Wilson’s rich plays are enduring gems that generations of artists want to interpret. Oscar winner Denzel Washington, for example, will produce and direct new versions of all 10 plays for HBO, reprising his Tony-winning performance in Fences opposite How To Get Away With Murder star Viola Davis.

The new M Ensemble version of The Piano Lesson has a few key links to its earlier 2003 production. André L. Gainey, who played the lead male role of Boy Willie, is now the show’s director. Ray Lockhart as the aspiring preacher Avery and Chat Atkins as the boozy musician-raconteur Wining Boy are back in their same roles.

In many respects, that first production (featuring now-famous playwright Tarell Alvin McCraney as Boy Willie’s pal Lymon and Carbonell Award winner Lela Elam as a good-time gal named Grace) was the better of the two. Done in the company’s longtime North Miami space, the show was tight and powerful, its actors more in synch with the demands of Wilson’s style.

However, the current Piano Lesson, staged in a borrowed space at North Miami Senior High School (where Gainey teaches drama), has two glorious assets: Ethan Henry and Makeba Pace (who happen to be married in real life) as Boy Willie and his sister Berniece.

Berniece, the widowed mother of 11-year-old Maretha (Danielle-Rae Lockhart), is living in Pittsburgh’s Hill District in a house owned by her uncle Doaker (Lowell Williams), a railroad worker. It’s 1936, and times are beyond hard, but the one family heirloom that could bring her money is the thing Berniece will never sell: a piano with her family’s painful history carved into its surfaces.

Boy Willie, who blows into Doaker’s house like a bombastic wind from Mississippi, has other ideas. He has a chance to buy land owned by the newly deceased descendant of a white family that once owned Boy Willie’s family. So with Lymon (Scott Wesley), he has brought a load of watermelons up north to sell, and he wants to turn the piano into cash too. That will happen over Berniece’s dead body – or, more likely, Boy Willie’s.

Pace and Henry are well matched in their polished technique, ability to convey the multiple facets of their characters and their ferocity, though hers appropriately has more tonal variations. They’re two of the region’s finest actors, and whenever Boy Willie and Berniece are going head-to-head, which happens frequently, The Piano Lesson is a better production.

The other actors, including Charita Joseph as Grace, have their moments; in particular, Wesley’s Lymon enjoys a sweet one with Berniece, Lockhart’s Avery a powerful one as the preacher tries to cast out a ghost. But Williams, often so soft-spoken that he’s hard to understand, doesn’t have his lines down. His hesitation and repetition are distracting, and unfortunately, it’s Doaker who delivers the key monologue explaining the fraught history of the piano. That passage is a shadow of what it could and should be.

Uneven? Yes. But the good news is that M Ensemble’s The Piano Lesson features a pair of actors who play Wilson’s words like a virtuoso at a Steinway.