At GableStage, ‘Rubenology’ actor, 84, is finally in spotlight 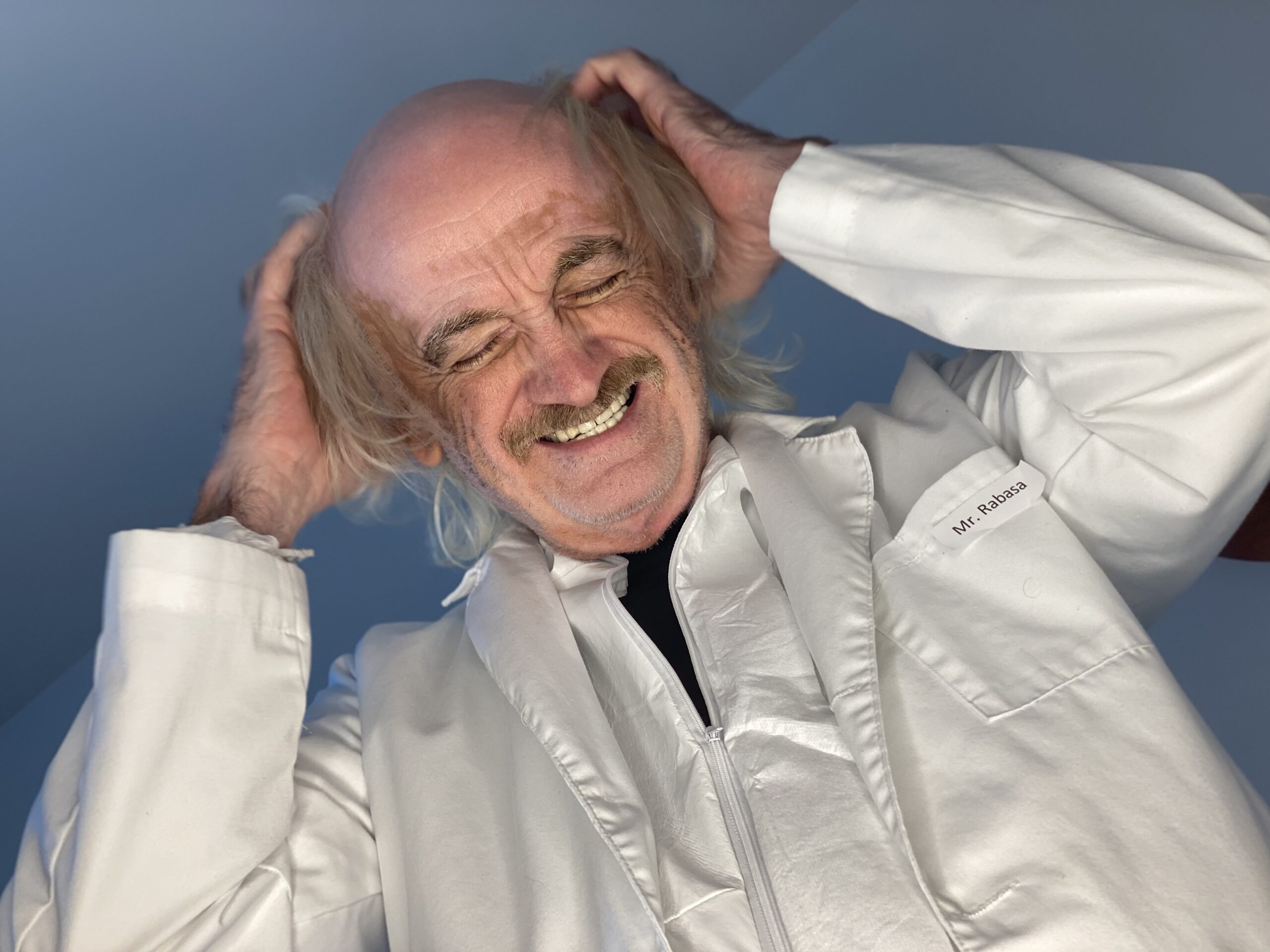 Actor Ruben Rabasa moves from his usual sidekick/supporting roles into the spotlight as the star of “Rubenology: The Making of an American Legend” running in a limited engagement at GableStage from July 14 through July 31. (Photo courtesy of Abre Camino Collective)

Unless you really know the Cuban-American talent pool, Ruben Rabasa’s name may not ring a bell, despite his many decades of success as an actor.

Rabasa has more than 70 film and television credits (his latest is as Tio Walter in the Miami-set “Father of the Bride” remake).  His theater experience in Spanish and English stretches over more than six decades.

He’s also a standup comedian, an irresistible storyteller and a man who performed Spanish street theater in New York while taking opera lessons at Carnegie Hall. In 2019, he became a meme as the eccentric focus group guy from Tim Robinson’s Netflix comedy series “I Think You Should Leave.”

Now, at 84, Rabasa is moving from his usual sidekick/supporting roles into the spotlight as the star of “Rubenology: The Making of an American Legend,” a show that explores both his Cuban back story and his life as a proud American. The world premiere coproduction from the Abre Camino Collective and GableStage, billed as a special event, has a 12-performance run from Thursday, July 14 through Sunday, July 31. 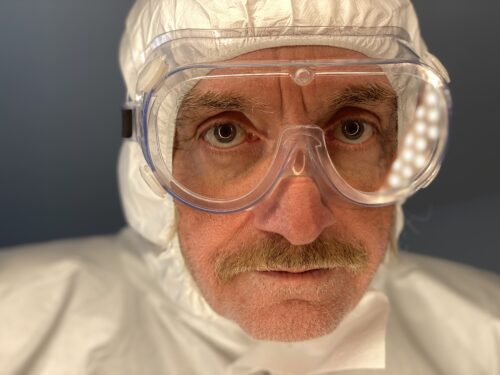 “Rubenology: The Making of An American Legend” has its roots in the immersive Miami hit “Amparo,” created by the same team. (Photo courtesy of Abre Camino Collective)

“Rubenology” has its roots in the immersive Miami megahit “Amparo,” which opened in 2019 and ran for months in a dramatically reimagined old home not far from the Arsht Center.  Rabasa wasn’t part of the original cast, but he went into the show a month after opening and stayed for seven months.  Playing Miguel, the exiled former emcee of Havana’s Club Náutico, he quickly formed a lasting bond with playwright Vanessa Garcia and director Victoria Collado, the women behind Abre Camino.

Before long, the life stories Rabasa would share with Garcia, Collado and Robby Ramos, the actor who played his grandson in “Amparo,” got the Abre Camino partners thinking.

“We’re obsessed with preserving Cuban and Cuban-American stories,” Collado says.  “It felt like we needed to do this, like a responsibility . . .Robby had recently lost his grandfather, I had lost mine, and Vanessa was very close to hers (he passed away on her birthday in 2021).  Ruben has this ability, with those who love him, to make them family. . .During ‘Amparo,’ I felt like I’d known him all my life. It’s impossible not to love Ruben.”

In January 2020, before the pandemic began, Rabasa appeared as Manolito in the Miami New Drama’s world premiere of “The Cubans” by Michael Leon. After the world shut down, Rabasa, Garcia and Collado had time to focus on devising “Rubenology.” 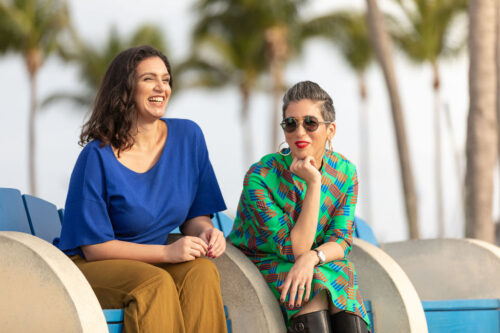 Playwright Vanessa Garcia, left, and director Victoria Collado, are the women behind Abre Camino Collective, creators of “Rubenology,” which is co-produced by GableStage. (Photo courtesy of Diego Texeria.)

Transforming memories into a compelling, engaging solo show is, however,  anything but simple.

“We started over two years ago, with Robby and me gathering Ruben’s stories.  I’d press ‘record’ on my iPhone, and Ruben would talk for hours in Spanish,” Garcia says. “After we got a week’s worth of interviews, I transcribed them, then later translated them into English.”

Rabasa left Fulgencio Batista’s Cuba with his mother and brother in 1955, when he was 17.  They arrived from their tropical homeland in the dead of winter, and he was not smitten.

“My mom lived at 135th and Broadway, where the subway came out.  It was very cold. I thought, ‘Oh my God, is this hell?’ I thought I was inside of a refrigerator,” Rabasa recalls.

His early days of working as a busboy and struggling to learn English are in the show.  So is the tale of how he worked a santero to get a bad-luck dead man off his back.  So are funny, touching stories about his beloved mother – she, like his other relatives, is gone now.

“Some stuff we thought was important, but he didn’t want to tell those stories. We’d go back and forth. We’d have arguments.  There was always a push-pull between English and Spanish, between generations and what happens in a theater,” says Garcia, who was also mindful of choosing English words that are easier for Rubasa to pronounce.

After the creators tested material with pandemic-era digital shorts in different cinematic styles on IGTV (now Instagram Video) and YouTube, “Rubenology” has emerged as a multimedia piece, one that calls attention to its own theatricality; as Collado describes it, “Ruben exposes the process.”

Garcia and Collado appear in videos, interacting with the live Rabasa and keeping the show going when he briefly leaves the stage.  A stagehand helps ready him, onstage, for his final story.  The structure is, says Garcia, both “practical and logistical.  He’s 84. We had to give him some breaks.”

“He’s an 84-year-old actor who makes you feel like he’s 24.  He challenges himself,” Collado observes. 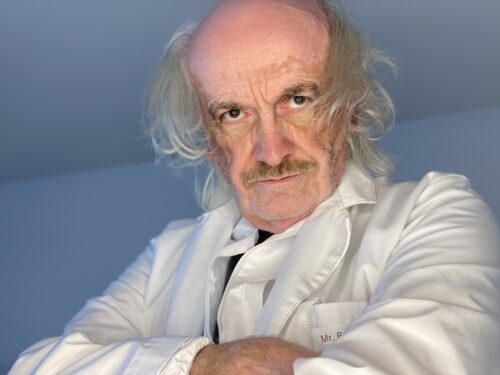 Ruben Rabasa stars in “Rubenology: The Making of an American Legend,” a show that explores his Cuban back story and his life as a proud American. (Photo courtesy of Abre Camino Collective)

After his years in New York, Rabasa lived in Miami for a time, appearing in the movies “Guaguasi” and “Amigos” (and others), five episodes of “Miami Vice,” 39 episodes of the Spanish-language series “Corte Tropical” and many more. After he moved to California, his movie and TV resume grew, with film work alongside Andy Garcia, Marisa Tomei, Colin Firth, Adam Sandler, Gloria Estefan and others.  But when  “Amparo” came calling, he gladly came back to Miami and stayed

“The majority of Spanish-speaking actors in California are Mexican, and directors would want me to sound Mexican. I just want to be me,” he says.

Garcia notes, “He’s been trying to tell his story forever.  But people kept getting in the way.  We thought, ‘How do we stop people from taking the mic away from him?’ ”

After he established his strong connection with Collado and Garcia – Rubasa calls them “my new family” – he got the chance to put his life onstage.  His play is both serious and funny, and he believes the latter is harder to pull off.

“It’s more difficult to make people laugh. You have to have the right timing,” he says.

He would love to do a version of “Rubenology” in Spanish – “it would be easier,” he says with a smile – but looks forward to its debut in English and to sharing his life journey so far.

“In the beginning, it was difficult, but then I started loving New York and freedom,” he says.  “I get to tell about my experiences in the United States and how I grew as a human being.”

Garcia – and Rabasa as well – would love it if “Rubenology” could help transform the actor from well-known supporting player to leading man.  Whatever happens, the playwright is happy to be bringing some long-overdue focus to the resonant life of a man brimming with stories.

“Ruben has been busy paving the road,” she says. “There is only one Ruben.”

WHAT: “Rubenology: The Making of an American Legend” by Vanessa Garcia and Ruben Rabasa