At GableStage, ‘It’s Only a Play’ shimmers with love, vitriol 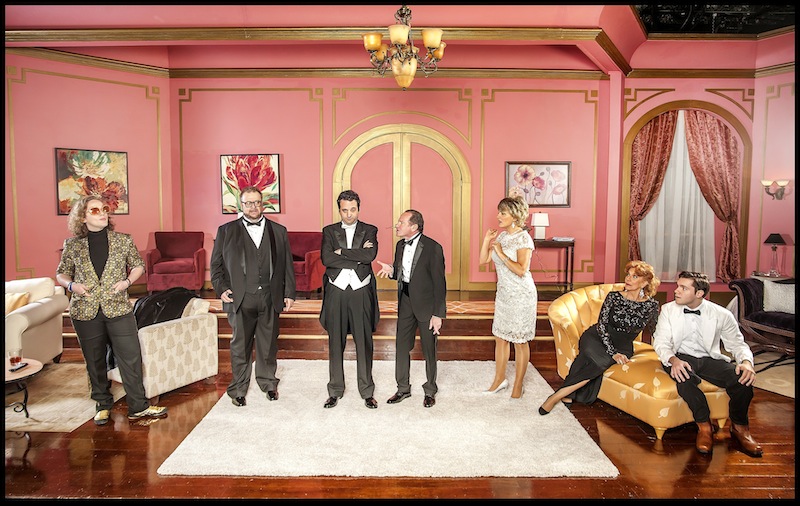 The title of Terrence McNally’s It’s Only a Play, which is now getting a deftly fizzy post-Broadway production at GableStage, is meant as a kind of comforting mantra.

The characters in McNally’s sometimes-vitriolic Broadway valentine are nervously awaiting reviewers’ verdicts on the new play The Golden Egg. Sure, that title is critical catnip, and everyone knows that the only review that matters will come from Mr. Ben Brantley of the New York Times. But no matter how the opening night thumbs-up thumbs-down judgments play out, these theater folk remind themselves that, well, this isn’t life and death. It’s only a play.

A lovely thought if it were true, but for the characters in It’s Only a Play, this is life and death. Theater with a capital “T” is everything to the actors, director, producer, playwright, critic and aspiring actor whose lives intersect at an opening night party overflowing with boldface names. For them, theater is romance, an addiction, classy, redemptive, irresistible.

McNally’s collection of artists and narcissists is brought to vibrant, grandly funny life by director Joseph Adler and a cast mixing GableStage veterans and newcomers. Audience members who happen to work in theater or love the art form will get an insider’s pleasure from McNally’s cascade of jokes, digs and references, but It’s Only a Play is a solidly entertaining comedy even if you’d choose a root canal over watching Mamma Mia! one more time.

Aspiring actor Gus P. Head (Joe Ferrarelli), star-struck and clearly naïve, delivers a parade of coats to Julia’s bed. James Wicker (Michael McKeever), an actor who abandoned theater for a lucrative TV sitcom, has come back to New York to support his best pal, Golden Egg playwright Peter Austin (Antonio Amadeo).Leading lady Virginia Noyes (Lourelene Snedeker) turns up to phone her parole officer and partake of the drugs that doubtless helped get her in trouble in the first place. Golden Egg director Frank Finger (Wesley Slade), a British enfant terrible whose most insane ideas unfailingly win critical praise, swans around the room explaining how he really hopes this one is a flop. And Ira Drew (Christopher Chisholm), a pompous critic (when a playwright creates the character of a critic, is there any other kind?), shows up with amusingly snooty pronouncements and an agenda.

Playing the role done by Nathan Lane on Broadway in 2014-15 (and by James Coco in the 1986 Off-Broadway production), McKeever – a Carbonell Award-winning actor, playwright and designer – is wry, sly and droll, a subtle comedian with impeccable timing. Snedeker is nothing less than delicious and hilarious as the washed-up grand dame whose black evening gown conceals a special accessory. McKenna radiates heart and a nurturing sweetness as Julia, the dim-bulb producer given to endearing malapropisms.

Amadeo, dashing in a top hat and tails, conveys the wonderstruck soul of a playwright who reveres his art form and hopes for the best. Ferrarelli manages to make two running gags – delivering and extracting coats, using inappropriate terms of endearment with the other characters – amusing each time. Slade, who exudes an Elton John vibe as costumed by Tillman, embodies what American theater practitioners hate or envy about lionized Brits. Chisholm, representing everything playwrights loathe about critics, mines a mother lode of comedic gold.

It’s Only a Play is, indeed, only a play. But it’s a very funny one, and at GableStage, it’s getting a first-rate production by pros at the top of their game.