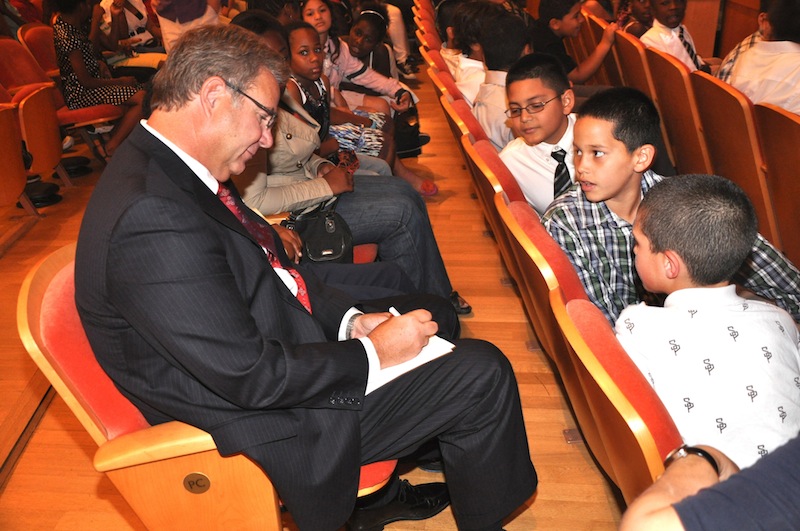 When M. John Richard decided to leave the New Jersey Performing Arts Center in late 2008 to become president and chief executive officer of Miami’s Adrienne Arsht Center for the Performing Arts, he arrived in South Florida with a vision, myriad ideas and a long-term exit strategy.

Richard, who led a $187 million fund-raising drive to build the New Jersey center and served as the center’s executive vice present and chief operating officer during his 19-year career with the Newark-based center, is the third and longest-serving chief executive to lead the Arsht since its opening in 2006 as the Carnival Center. [Michael Hardy, the first president and CEO, was succeeded in 2007 by former Kennedy Center president Lawrence J. Wilker, who was interim president-CEO until Richard was hired.]

Designed by architect Cesar Pelli, with the buildings housing the 2,400-seat Ziff Ballet Opera House and 2,200-seat Knight Concert Hall hugging either side of Biscayne Boulevard between NE 13th and 14th Streets, the $472 million center built in a public-private partnership has become the heart of what Richard calls Miami’s “new town square” in its dozen years of operation.

Rechristened the Arsht Center in 2008 in honor of a $30 million donation from philanthropist Adrienne Arsht, the performing arts center has amassed some impressive numbers that suggest its impact.

By the staff’s reckoning, Arsht performances and events have been attended by more than 4 million audience members. More than 20,000 artists have given more than 5,000 performances. The center has commissioned 18 pieces of work in a variety of disciplines, hosted 17 world premieres on its stages and has had an economic impact estimated at more than $2 billion.

On Richard’s watch, the center has also emphasized accessible arts educational experiences for Miami students. In partnership with the Miami-Dade County Public Schools, the Arsht has hosted nearly 200,000 fifth graders at free performances of its musical “Rock Odyssey.”In October, the commissioned musical “Kitty Hawk” and its accompanying followup workshops brought STEM education – STEAM, if you add the “A” for arts – to life for 27,000 seventh graders.

But talk to Richard about any aspect of the Arsht Center’s multifaceted arts presence, and he’s as enthusiastic as the day he ditched chilly Newark for sunny Miami.

Fresh from seeing Zoetic Stage’s acclaimed world premiere production of Christopher Demos-Brown’s “Wrongful Death and Other Circus Acts” in the center’s black-box Carnival Studio Theater the night before, Richard says Zoetic – which was born at the center in late 2010 and now leads all South Florida theater companies with 17 nominations for the region’s 42nd annual Carbonell Awards – is a great fit for the Arsht.

“That’s a proud representation of our mission to be world-class and community-based,” he says.“That homegrown star power belongs in that black box.”

With its wide variety of programming, including presentations by resident companies Miami City Ballet, the Florida Grand Opera and New World Symphony, the Arsht under Richard has offered something artistic for everyone: Broadway in Miami, the Cleveland Orchestra in Miami, the Knight Masterworks Seasons, the Ziff Classical Music Series, Theater Up Close, Summer Shorts, the Hispanic Theatre Festival, Jazz Roots, Live at Knight, the Flamenco Festival, free Gospel Sundays, the Miami Symphony Orchestra, Piano Slam, AileyCamp Miami and more.Plus performances by thousands of world-famous artists and companies.

“We should be available to all populations,” Richards says. “Our programming should not only be relevant but should be a thought leader.”

In the future, he adds, “we want to push the envelope and use our venues in different ways.”

Richard, who will be honored at the center’s 12th anniversary gala in the Knight Concert Hall on March 24, has been a powerful and accomplished leader during his decade at the center, say board chairman Ira D. Hall and the center’s namesake philanthropist.

“John has accomplished much during his time at the center, and we are grateful that he has led the center to flourish as a cultural magnet,” Hall, who has appointed a search committee to find Richard’s replacement, said in a statement. “John’s stable financial management and commitment to providing access to the arts for everyone has helped us to accomplish our goals as an organization faster than many thought possible.”

In her statement, Arsht said, “While we are sad to bid John Richard farewell, we are also incredibly grateful for how far we have come under his direction and guidance.John’s commitment to the center and, more importantly, his love for greater Miami have been unwavering.”

Richard and his wife, Florida International University assistant professor Lynne F. Richard, plan to remain in Miami. Richard wants to take some time off, then “recalibrate” his efforts to pursue what he calls “passion projects.” But those will not, he says, require the kind of 24/7 commitment he made to the Arsht Center.