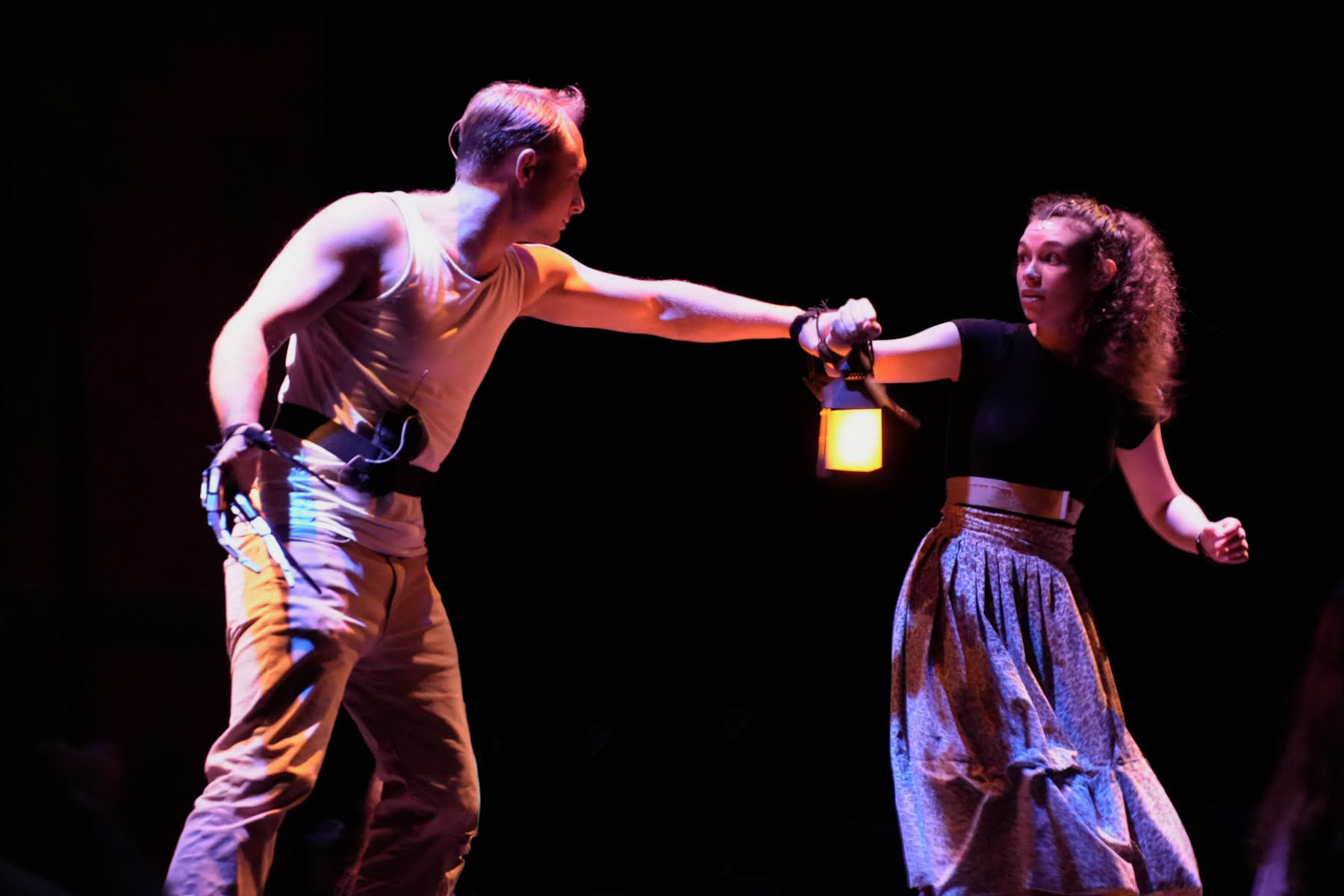 Maxime Prissert is the Beast and Yardén Barr is Belle in Area Stage Company’s “Beauty and the Beast” at the Carnival Studio Theater inside the Adrienne Arsht Center for the Performing Arts, Miami, through Sunday, Aug. 28. (Photo courtesy of Giancarlo Rodaz)

Since its 1991 debut as an Oscar-winning animated movie, Disney’s “Beauty and the Beast” spawned a 1994 Broadway musical that ran until 2007 (in 5,461 performances), toured the country, and played all over the world. The show has endured as an immensely popular title for regional, community, and school theater groups.

Now “Beauty and the Beast” is back, this time as an Area Stage Company production in the Carnival Studio Theater at Miami’s Adrienne Arsht Center for the Performing Arts.  But the show, which will preview Tuesday, Aug. 9 through Thursday, Aug. 11 and officially open on Friday, Aug. 12, is not – emphasis on not – a typical version of the Disney hit.

Based on the 1756 French fairy tale “Le Belle et la Bête” by Jeanne-Marie Leprince de Beaumont, “Beauty and the Beast” is, as the housekeeper Mrs. Potts sings in the musical, a “tale as old as time.”

In Disney’s version, an enchantress’s spell turns the vain, cruel Prince Adam into a frightening man-beast.  If he can experience true love before the final petal falls from an enchanted rose, he – and his servants, who are transforming into household objects – can revert to human form.  But after the beautiful, brainy villager Belle takes her father’s place as the Beast’s prisoner, her captor behaves so badly that true love seems highly unlikely. 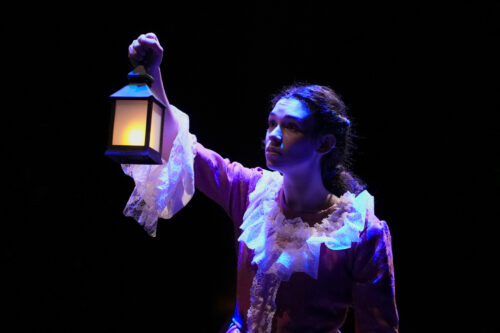 Yardén Barr’s Belle makes her way through the dark woods in Area Stage’s “Beauty and the Beast.” (Photo courtesy of Giancarlo Rodaz)

The beloved story is a classic. But that doesn’t mean the Disney favorite has to be produced in a traditional way.

As he did in the summer of 2021 with Area Stage’s immersive version of “Annie,” director Giancarlo Rodaz is taking a fresh approach to a treasured show.

“I’m amazed that no one’s done it this way before,” says Rodaz, who is associate artistic director of the company founded by his parents, artistic director John Rodaz and executive director Maria Banda-Rodaz.  “When you do theater, you’re competing with every great piece of media ever made. You have to take a risk.”

In this case, the risks include scale (16 actors are in the cast, with a number playing multiple parts), cost (Banda-Rodaz reports that Area Stage’s typical large-musical budget of more than $275,000 has to grow by 25 percent for shows at the Arsht because of additional production costs there), and faith that audiences will respond as enthusiastically to becoming part of the action as they did to “Annie.”

The director concedes that he sometimes says to his parents, “What have I gotten myself into?”  But the 26-year-old South Florida native, who grew up going to Disney theme parks, continues to dream big about giving audiences experiences that provide a deeper kind of fun.

“You think about what fun is. ‘Fun’ is cheap. It can be an inflatable pool in your backyard. What is something that’s truly transporting, that makes a huge impression on your memory?” Rodaz says.  “I thought, ‘How great would it be to have people really be our guest?’ I sat down with the actors, (set designer) Frank Oliva, and my parents to talk about what it would mean to make the story around the audience.”

To that end, Area’s “Beauty and the Beast” takes place in a massive castle hall – Rodaz describes it as a blend of the ballroom from the film and the Hogwarts castle from the Harry Potter series – with the audience seated at three long tables.  He insisted the story be told using only elements that could be found in an 18th-century castle.

The musical’s title characters are being played by New York-based Yardén Barr as Belle and Maxime Prissert (who grew up in Palm Beach Gardens) as the Beast.  Barr’s resume includes such shows as “Sleeping Beauty,” “The Wizard of Oz,” “Something Rotten!,” “Brigadoon,” “A Very Potter Musical” and more. Prissert, who has a degree in musical theater and studied opera in Austria, has had leading roles in “Oklahoma!,” “Cabaret,” “Man of La Mancha” and “Shrek the Musical.”

Prissert, who played the self-adoring Gaston in an earlier production of “Beauty and the Beast,” observes, “The Beast and Gaston are the ultimate foils. I read the script from Gaston’s point of view before. Now I’ve noticed little things in the writing that are very obvious.  The characters are similar, but the Beast handles things better.”

Now he’s playing a man who badly needs to learn several lessons, including the one about true beauty coming from within.

“I am Prince Adam. The ‘beastness’ is an affliction, an exaggeration of his selfishness,” Prissert says. “But he learns how to be a prince, how to love; Belle shows him that.”

Adds Rodaz:  “The prince was always a beast.  Now he looks like what he is.”

Belle, the Israeli-born Barr’s favorite Disney princess, is a role the performer has long coveted.  When she found an audition notice for Area Stage’s production on Playbill.com, she went for it.

“Belle knows what she wants, but she doesn’t necessarily have the tools to get there.  She rejects Gaston. She has her own dreams, her own passions,” Barr says.

A number of Area Stage veterans are in the cast, and they’re excited about large-scale performing immersive theater at the Arsht Center.

“The size of this sticks out the most,” says Frank Montoto, who plays Gaston and the servant Lumiere in the show.  “It’s massive.”

Imran Hylton, who donned a dress to play Miss Hannigan in Area’s “Annie,” is taking on two very different roles in “Beauty and the Beast.”  Audiences will see him as Belle’s eccentric father Maurice and as the opera-singing Madame de la Grande Bouche.

What Hylton appreciates in the process of reinventing a musical, he says, is “taking a show and stripping it down… It’s a lot of fun.” 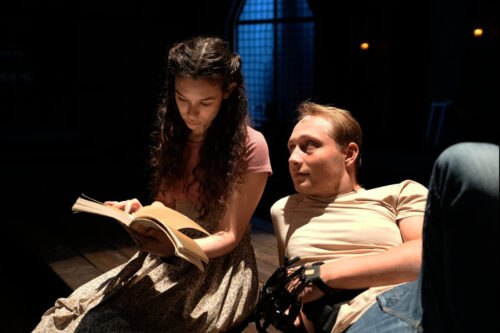 Adds Tico Chiriboga, an ensemble member making his Area Stage debut, “Once we started to get into it, this felt like it’s the most natural way to do the show.”

Rodaz concedes that most of the musical numbers in “Beauty and the Beast” are large-scale, so he was challenged to find ways to make the audience part of the action.

“In the big number about Belle, we are gossiping to the audience,” he says.  “In the tavern number about Gaston, the audience at the center table will get prop mugs.  We’re making them complicit in cheering on a villain. It’s interesting and fun.”

Rodaz has faith that Area Stage is taking a deep dive into what he considers one of the two best Disney musical scripts (“The Lion King” being the other).  He has savored the creative process with his collaborators, the “journey of discovery” that he hopes will bring another dimension to a very successful piece of musical theater.

“We’re trying to amplify what’s there. This doesn’t feel like a kids’ show. It feels like a proper musical that’s beautifully written, with a great score,” he says.

WHAT: Area Stage Company: Disney’s “Beauty and the Beast”