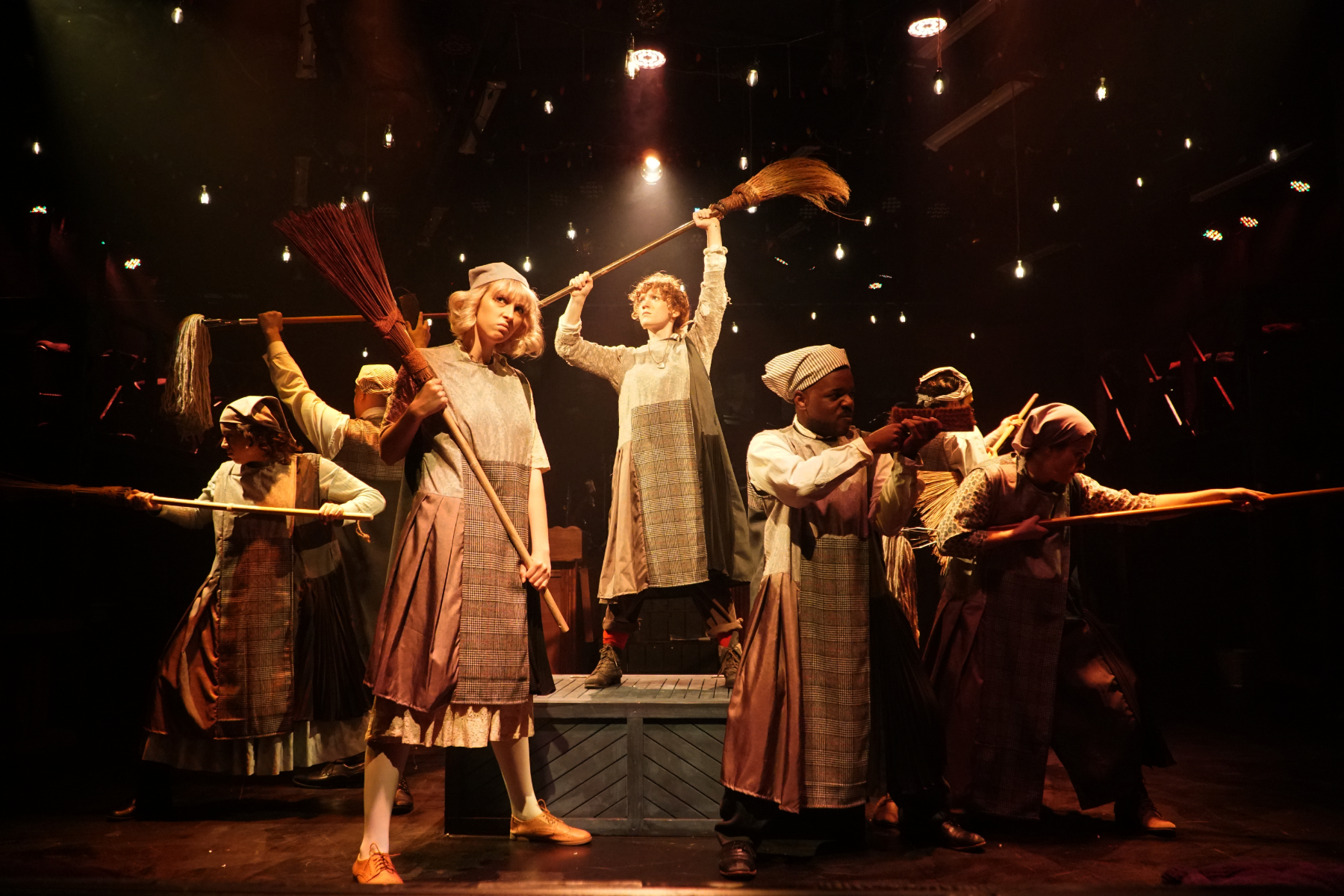 The orphan girls in Area Stage’s “Annie” sing about their daily burdens in “It’s the Hard Knock Life.” (Photo courtesy of Giancarlo Rodaz)

After its popular outdoor production of “Shrek the Musical” in January – and after lengthy downtime during the pandemic – Area Stage is inviting audiences to its indoor space at South Miami’s Shops at Sunset Place to experience a smashing new production of “Annie.”

The brainchild of associate artistic director Giancarlo Rodaz, this production of the long-running 1977 Broadway hit is like no other you may have seen before, even if “Annie” happens to be your favorite musical.

For one thing, as its poster cheekily notes, this time “Annie” is being performed by just eight actors, with nary a scene-stealing kid in sight. Rodaz’s “Annie” casting decisions would seem to satisfy even late actor-comedian W.C. Fields, the curmudgeon who famously advised against working with animals or children: Annie’s stray dog pal, Sandy, is played by a puppet crafted from weathered footwear.

For another, Area’s “Annie” stands out because Rodaz – who directed, choreographed and designed the show’s set and lighting – has transformed the theater’s space into a Prohibition-era speakeasy. The “Little Orphan Annie” comic strip that inspired the show launched in 1924, and the musical itself is set in 1933, the year a constitutional amendment kicked Prohibition’s alcohol ban to the curb.  So the playful, era-appropriate speakeasy setting feels both creative and logical.

The fun begins at the box office, where you’re given a password to gain entry into the theater space. Depending on what you pay for your ticket (prices range from $30 for students to $200 for an onstage table seating three), you’ll find yourself sitting on a riser, a balcony, at the bar or right in the thick of the action, where actors might sit or stand on your table or chat with you at intermission.

The faux brick walls, made from hand-scored and hand-painted foam, are adorned with advertising posters (one touts Harold Gray Chewing Tobacco, a nod to the creator of the Annie comic strip) and portraits of President Franklin D. Roosevelt and his cabinet, who pipe up in the musical in an unexpected way. 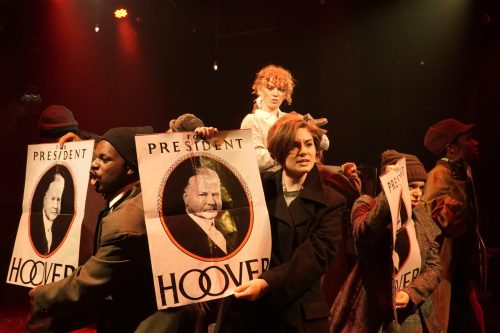 The residents of a Hooverville homeless encampment sing the sarcastic “We’d Like to Thank You, Herbert Hoover” in Area Stage’s “Annie.” Photo courtesy of Giancarlo Rodaz)

In a deliberate nod to the musical’s Depression-era story, Rodaz delivers “Annie” in a theater-of-the-poor style, with few set pieces and simple yet highly effective props.

The orphanage run by the child-loathing Miss Hannigan, for example, typically features a long row of beds occupied by Annie and her put-upon pals. Here, the orphan “girls” (played by female and male cast members) crowd onto and around a single large box that stands in for the beds, increasing the sense of claustrophobia and deprivation.

The young artists in the cast, a blend of relatively recent college graduates and a couple finishing up their schooling, are musical actors with powerful yet nuanced voices. When they’re singing together, the eight performers sound like many more, and (kudos to Orlando Hall’s sound design) the balance between the vocalists and the band is excellent.

Staci Stout, a petite actor with long curly hair nowhere near the red typically sported by girls in the title role, plays 11-year-old Annie as an optimist with an unshakable faith that her long-gone parents will return to claim her. Plucky and resilient as she sings “Tomorrow” and the melancholy “Maybe,” the likable Stout makes you forget that she’s an adult playing a child.

The other actors play multiple roles, popping up as an orphan here or a resident of the Hooverville homeless encampment there, but each gets a key featured role as well.

Frank Montoto is the bald billionaire industrialist Oliver “Daddy” Warbucks, a man so busy running an empire that he never paused to reflect on his loneliness.  Montoto’s rendition of “Something Was Missing” is one of the show’s loveliest moments.

Katie Duerr, who also serves as the show’s second music director, plays Warbucks’s ultra-efficient secretary Grace Farrell, a woman who understands what her boss needs far better than he does. Warbucks has long been her secret crush, and when a glimmer of mutual attraction surfaces, Duerr plays it with a beautiful balance of subtlety and sunshine bursting through the clouds. 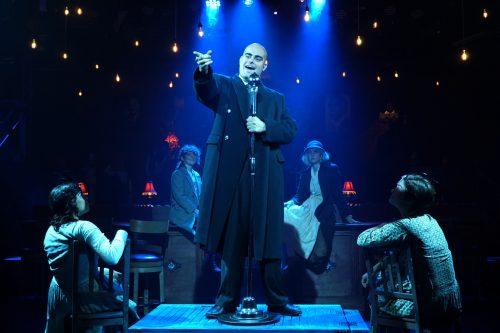 Miss Hannigan, the booze-loving, child-loathing orphanage matron usually portrayed by middle-aged actresses with a flair for comedy, is here played by a mister. Imran Hylton is a tall, lanky Black actor who transforms into a woman courtesy of a turban, a dress-like vest and heels made for dancing. The costume part is the work of designers Constanza Espejo and Maria Banda-Rodaz, but this fabulous-funny Miss Hannigan is a collaborative effort by Hylton and his director.

John Mazuelos plays Miss Hannigan’s conniving brother, Rooster, with Annette Rodriguez as his floozy girlfriend, Lily St. Regis. With Hylton, they sing an exuberant “Easy Street,” imagining a lush life if they pull off a con pretending to be Annie’s missing parents, thus claiming a $50,000 reward. Mazuelos also delivers the show’s most chilling moment, pulling a switchblade as he explains how he’ll get rid of Annie once he has the dough.

As Roosevelt, who calls on the FBI to help find Annie’s parents, Isis Palma is heard but not seen as the portraits of the president and his cabinet cleverly come to life.

One necessary note for those emerging more hesitantly from pandemic life: Area’s “Annie” is really immersive. Though your temperature is taken at the box office, widespread use of masks and anything resembling social distancing were simply not happening within the theater space during a recent performance.

That said, “Annie” is a welcome tonic after a long live theater drought. Resilience, optimism and caring for others are just some of its resonant thematic charms. And Rodaz’s vision makes this interpretation special.