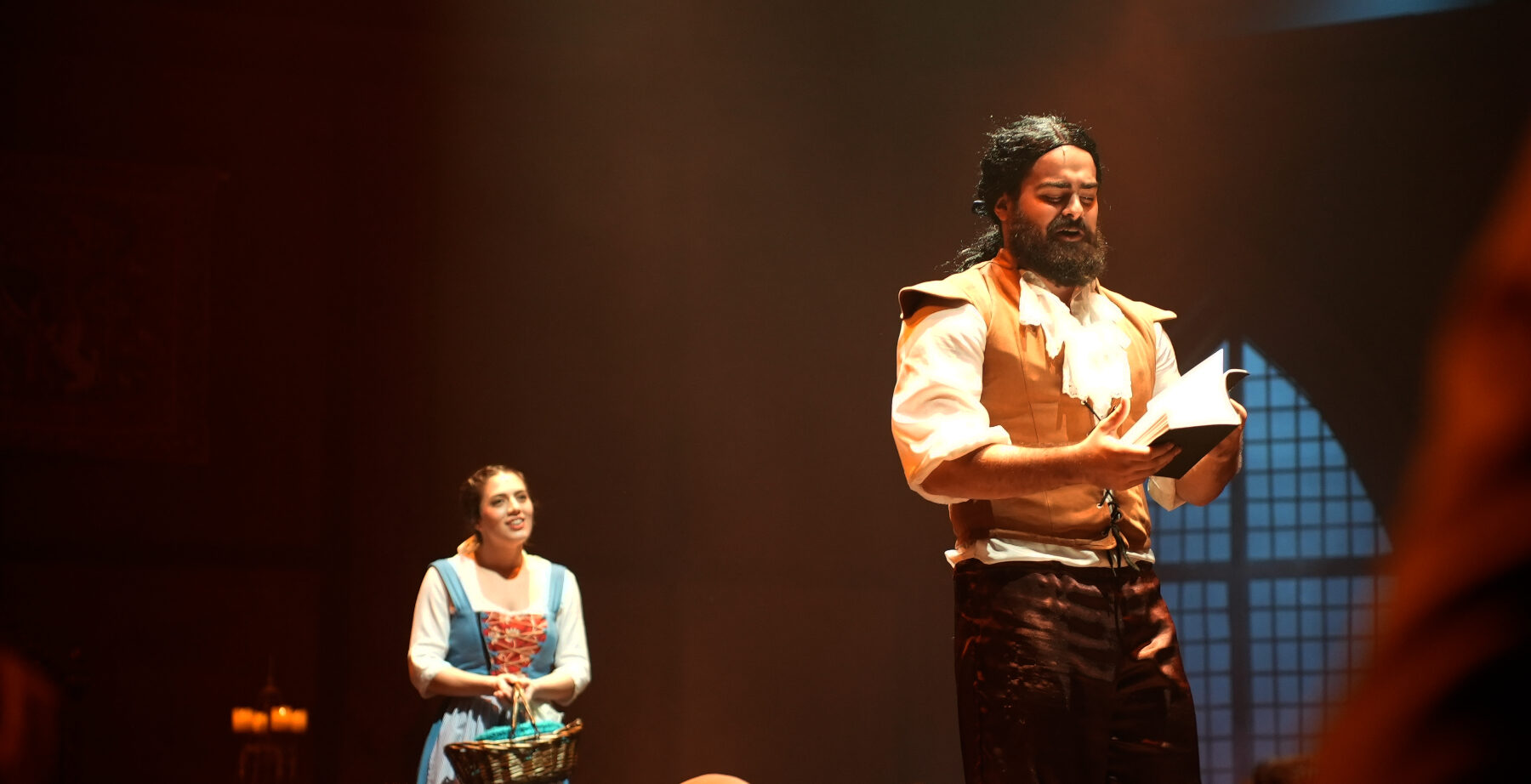 Frank Montoto as Gaston and understudy Michelle Gordon as Belle in Area Stage Company’s “Beauty and the Beast” with the audience seated at tables to watch the action. The production is in the Carnival Studio Theater at Miami’s Arsht Center through Aug. 28. (Photo courtesy of Giancarlo Rodaz)

Area Stage Company’s new immersive production of Disney’s “Beauty and the Beast” is, as the French would say, magnifique.

Presented in a transformed Carnival Studio Theater at Miami’s Adrienne Arsht Center for the Performing Arts, the show is a two-year labor of love and creativity on the part of Giancarlo Rodaz, Area Stage’s associate artistic director.  Working with numerous collaborators, the young director has achieved a larger-scale success on the order of his immensely popular immersive version of “Annie,” which the company presented in June of 2021, in the company’s smaller South Miami theater.

For this production, merely entering the Carnival Studio space is a tipoff that you’re not about to see a traditional version of Disney’s “Beauty and the Beast.”  Set designer Frank Oliva has transformed the Carnival into the prince-turned-Beast’s castle. A small central playing area along one wall holds the creature’s throne, with the period-costumed musicians (all wearing white wigs, no less) nestled on either side. 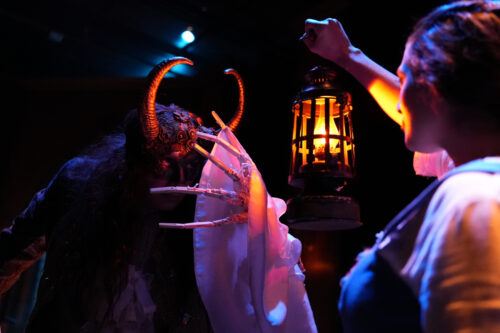 Theatergoers are seated on benches at three long tables (a few can choose seating along two walls), and they’re warned not to put anything on the tables because, well, that’s where the actors perform much of the musical.  Even audience members get to make a grand entrance as they arrive to take their seats, and on opening night, two little girls who were each wearing Belle’s famous golden ballgown got a round of applause as they entered side by side.

So that’s the environment for a new way of telling a familiar story, one based on the 1756 French fairy tale “Le Belle et la Bête” by Jeanne-Marie Leprince de Beaumont.

What’s most significant, of course, is the way that story is told.

In terms of the music by Alan Menken, lyrics by Howard Ashman and Tim Rice, and the book by Linda Woolverton, the Area Stage Company version is completely faithful to Disney’s enduring 1994 Broadway show.  But Rodaz’s distinctive interpretation sets the production apart and makes the familiar seem fresh. 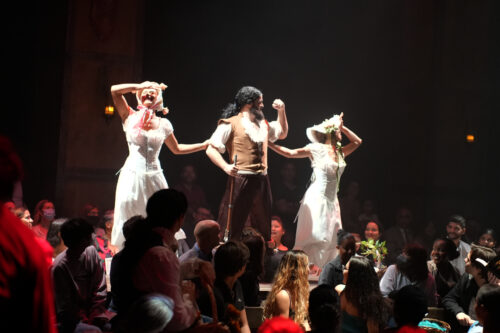 One example among many:  The castle’s servants, suffering under the same spell that changed their cruelly imperious master Prince Adam into the Beast, are usually costumed as people who are gradually transforming into household objects.  Rodaz at first thought of having the actors use puppets, but now the performers, as costumed by Maria Banda-Rodaz, appear to be trapped in a never-ending masked ball, one in which they carry real antique objects representing what their service is to the Beast.  The effect is both beautiful and unsettling, and it gives a more adult feel to their plight.

Another example of the inventiveness: When the Beast, his heart softening toward the young woman he has taken prisoner, decides to let Belle have unrestricted access to his vast library, Rodaz creates a joyous moment by having audience members seated on either side of Belle and the Beast hold up books. They’ve been surreptitiously distributed by members of the ensemble.

The configuration of the room creates staging challenges, with actors running back and forth on the tables, leaping off the ends and squeezing by each other as they pass.  Joe Naftal’s lighting guides your gaze, but depending on where you’re seated, you may find yourself doing a lot of head swiveling.

The five-piece orchestra, led by music director and pianist Rick Kaydas, plays the score beautifully and sound designer Rob Rick gets the interplay among musicians, singers and sound effects just right.  Choreographer Irma Becker creates movement that necessarily plays out environmentally, but she honors tradition as the Beast dances with the golden-gowned Belle while Katie Duerr’s Mrs. Potts sings a moving version of the title song. 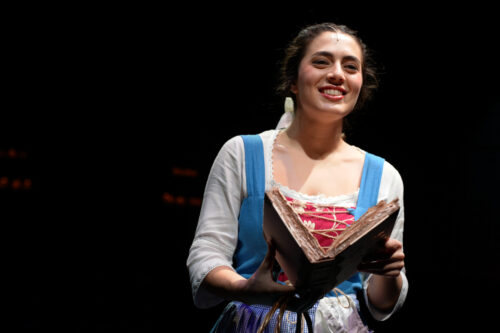 Understudy Michelle Gordon went on as Belle for the opening weekend of Area Stage Company’s “Beauty and the Beast.” (Photo courtesy of Giancarlo Rodaz)

The young 16-member cast was missing a key member on opening weekend due to the illness of Yardén Barr, who is expected to return as Belle for the second weekend of the show and the rest of the run.  Understudy Michelle Gordon stepped into the role, and despite a few nerves at the beginning of opening night, she sang with sweetness and power, conveying Belle’s brains and bravery.

As Prince Adam and the Beast, Maxime Prissert is a presence both dominating and vulnerable.  Rather than the customary Beast head and hairy “paws,” he wears a spooky metal mask with devilish curved horns, and his fleshless hands appear to be nothing but bone.  Prissert’s booming voice is glorious, and his rendition of “If I Can’t Love Her” is as heartbreaking as it should be.

Rodaz has surrounded the title characters with talented singer-actors, including Duerr as the warm-hearted, British-accented Mrs. Potts and Luke Surretsky as her little boy Chip.  Four of the other actors in key parts play two roles each.

Frank Montoto, who has a knockout voice, plays the seriously narcissistic Gaston and the charming Lumiere.  John Luis is Gaston’s comic sidekick Lefou and the Beast’s worried majordomo Cogsworth.  Imran Hylton is a loving, bumbling old soul as Belle’s father Maurice, but watch out when he dons the wig and dress of opera singer-turned-wardrobe Madame de la Grande Bouche – he’d be a shoo-in to win “Ru Paul’s Drag Race.” Greta Hicks is the Enchantress who does the spell casting and doubles as Babette, the sexy French maid. 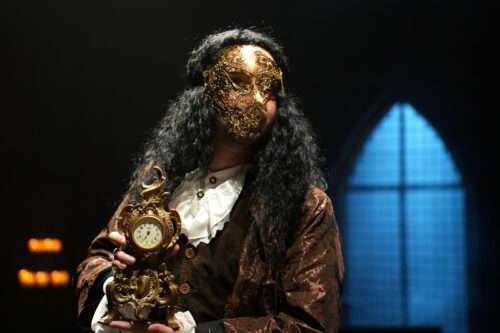 John Luis as Cogsworth is slowly turning into a clock in Area Stage Company’s “Beauty and the Beast” at the Arsht Center. (Photo courtesy of Giancarlo Rodaz)

The care that Area Stage Company has taken with its “Beauty and the Beast” is evident in so many aspects of the show.  Even the ornately decorated larger program is special, with French titles over its credits in a nod to the story’s origin.

Ticket demand for the show is great, but diehard fans of Disney’s “Beauty and the Beast” should be prepared for something different.  What Rodaz and Area Stage Company are bringing to the table – well, those three long tables – is a different, involving way of storytelling, one that makes theatergoers of all ages look at a familiar piece with fresh eyes. And isn’t that what theater is all about?

WHAT: Disney’s “Beauty and the Beast”

WHERE: Area Stage Company production in the Carnival Studio Theater at the Adrienne Arsht Center for the Performing Arts, 1300 Biscayne Blvd., Miami