‘Are You There, Bette Davis?’ from Uruguay opens Hispanic Theatre Festival of Miami 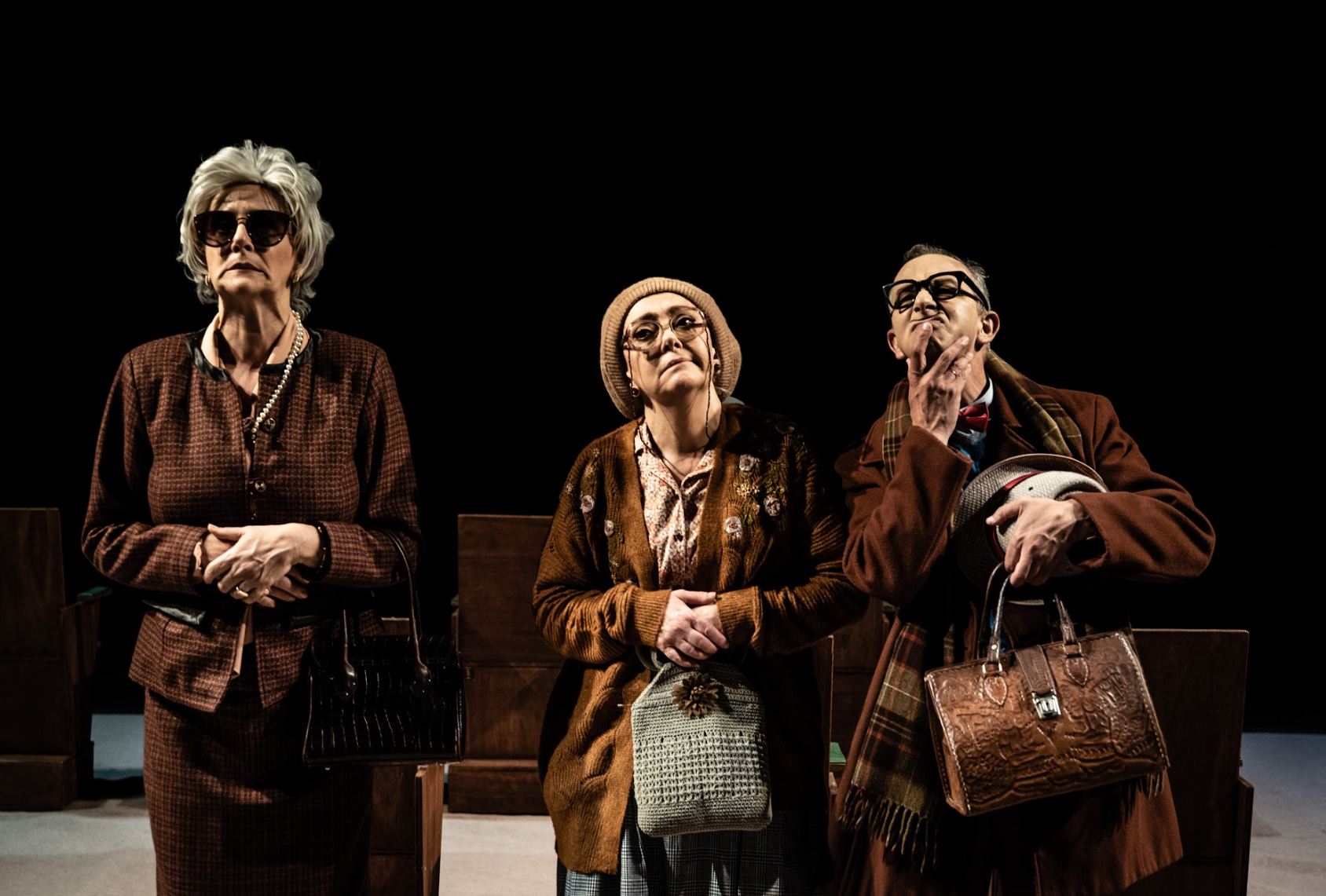 María Elena Pérez as Graciela, Martha Vidal as Azucena, and Carlos Sorriba as Aníbal in “Are You There, Bette Davis?,” which is part of the 36th International Hispanic Festival of Miami. (Photo courtesy of Domingo Milesi).

That cinema came to steal space from the theater at the beginning of the last century was a challenge for the stage, and since then, there have been many acts of revenge. One of the most recent is titled “Are You There, Bette Davis?,” a play written and directed by Uruguayan playwright Domingo Milesi that the International Hispanic Theatre Festival (IHTF) of Miami premieres on Friday, July 8 at the Black Box in the Miami Dade County Auditorium.

Azucena, played by Martha Vidal, faces two shocks: she retires, and her mother dies. Emptiness has her searching for nothing less than love and the meaning of life. That exploration takes her to a small neighborhood movie theater where she and her friend Graciela (María Elena Pérez) meet Aníbal (Carlos Sorriba), an inveterate movie buff. As if that were not enough, Azucena also indulges in experimentation with esoteric practices that, according to the program notes, “could establish a new interpretation of the present and a line of communication with the beyond.” 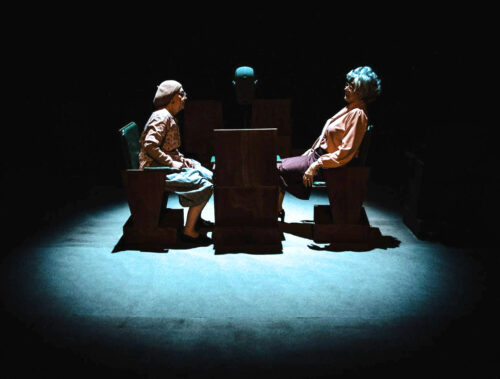 Martha Vidal, left, and María Elena Pérez, right, and the head that works as a microphone for the binaural sound system in “Are You There, Bette Davis?” (Photo courtesy of Domingo Milesi)

Spectators wear headphones to hear the performance as if they were sitting on stage. The effect is achieved thanks to “binaural sound,” a technique that records the voices of the actors with two microphones installed in what would appear to be a mannequin head placed on stage. This is also used to reproduce music simultaneously and pre-recorded sounds, such as street and beach environments.

“I always say that, above all things, this work is a sensory experience that has comedy, drama, melodrama, suspense; there is a bit of everything,” Sorriba told Chany Robson in Uruguay on the radio program “El Gato en el Tejado.”

In conversation with Artburst Miami from Montevideo, the play’s author and director describes the passion of mixing the languages of cinema and theater.

The fruits of that crossing “have been the motivators of my writing,” assures Domingo Milesi. “I like to think from the cut of a shot, from the fragmentation of an image, how a movie scene looks and how one language can be nurtured from the other without falling into the cinematographic representation of the shooting,” explains Milesi. “I use elements of cinema translated into theatricality.”

He underlines that he finds “the motor of theater” fascinating, referring to the body of the actor live, the stage presence, and the energy of the spectator coexisting in the same space with the actor. “But there are always certain resources of cinema that have been magnetic to me, such as intimacy, proximity, because they help empathy and the most hypnotic game,” he says. 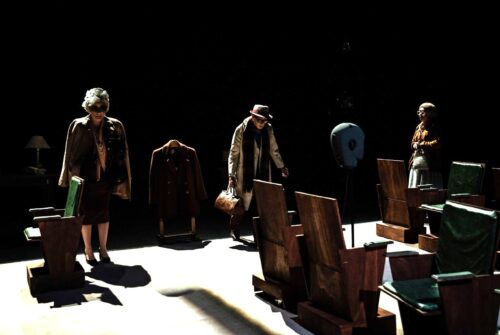 Martha Vidal (Azucena), Carlos Sorriba (Aníbal) and María Elena Pérez (Graciela) in a scene from “Are You There, Bette Davis?” (Photo courtesy of Domingo Milesi).

He confesses that it is harder for him to be distracted in a movie than in a theater and that while the atmosphere of the 1950s of the last century flies over “Are You There, Bette Davis?” the work pays tribute to a way of seeing cinema that is disappearing: the small neighborhood rooms. Milesi remembers when he was just over 20 years old in evening screenings at the Uruguayan Cinematheque, “a tiny room that is already disappearing here in Montevideo. We were very few, just four people, and that inspired me a lot.”

As proof of the cinematographic element used in the stage performance, he cites the use of actors with their backs to the public. “It’s a rule to say in theater: you can’t turn your back,” he says. “I review my staging and realize that I use the back as a narrative resource. I want to narrate from the back, and here I do it too. Having the viewers in headphones gives me certain freedom; I can compose visual frames that are not subject to sound, so the sound is a very cinematic narrative component in the story.”

Milesi reveals that the seed of the play was a concise text that he wrote when he was invited to participate in the workshop “Theater and Death” in Barcelona and that he made the definitive text knowing that he was going to have binaural sound in the performances. In his previous works, he says he experimented with physical resources such as dividing the audience space in half and making shots and reverse shots translated into theatrical language. In this one, he investigates more how sound generates dramatic tension. 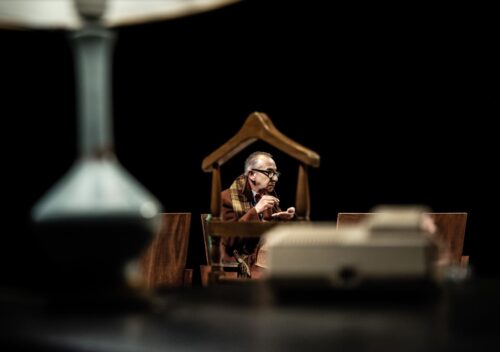 “Above all things, this work is a sensory experience that has comedy, drama, melodrama, suspense; there is a bit of everything,” says actor Carlos Sorriba about “Are You There, Bette Davis?” (Photo courtesy of Domingo Milesi).

Thanks to an award from the National Research and Innovation Agency of his country, he could count on the binaural sound system. It is the first time he uses it, and it is also the first time that the system is used in the Uruguayan theater, declares Milesi.

“Considering that everything happens in a movie theater, it works as if we had a spectator sitting there . . . We spent several months investigating because this technology enables whispering, it enables secrecy, it enables the sounds of clothing; everything takes on a new dimension, and the work becomes a truly immersive experience.”

I ask him to try to forget the official synopsis and say how he would tell a friend what “Are You There, Bette Davis?” is all about.

“I would start by telling that friend that it is a story of three solitudes; that although there is a protagonist, there are three co-protagonists because the three characters are important and relevant in their game; I would say that this is a story that talks about life, about old age, about humanity,” answers Milesi, and then, he falls into a confession: “When I wrote it I was not so aware of why I was doing it. I am 38 years old now, my parents are alive, and I have no direct connection with that age nor with Bette Davis, but there is something in the story that connects with questions about the meaning of our existence. The three characters are going through their old age in a very solitary way, and they accompany each other thanks to the cinema.”

He warns that the three characters are not fully revealed and have areas of mystery; however, that does not stop them from being endearing.

“I don’t like to load them with words: I want to go to the place where the character is alive, and I don’t have to explain it,” he says. “. . . Although there are things from the original script that do not reach the public, indeed, the character is greatly enriched by the construction made by the actors,” explains Milesi. “Theater happens thanks to that process.” 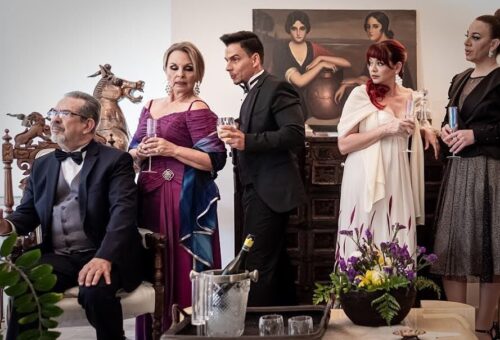 For the closing performance of its 36th season’s program, the International Hispanic Theater Festival of Miami presents a four-day run from Thursday, July 28 – Sunday, July 31 of “Mejor Me Callo (I’d Better Shut Up)” at the Arsht Center’s Carnival Studio Theater. (Photo courtesy of Teatro Avante)

In addition to “Are You There, Bette Davis?”, the 36th International Hispanic Theater Festival of Miami will stage six productions from Argentina, Chile, Spain, Puerto Rico, and the United States. Immediately after each premiere, the director of the Festival’s Educational Program, Beatriz Risk, will present forums in Spanish and English about the works.

On Sunday, July 17, on International Children’s Day, there will be workshops on manual arts, painting, puppetry, and mimicry, as well as a function of “Los Colores de Frida,” all with free admission between 2 and 6 p.m. at the Mid-Stage Theater of the Miami Dade County Auditorium. Prior to the performance of “Mejor me Callo” by Teatro Avante on Thursday, July 28, the festival will present its Award for a Lifetime Dedication to the Arts to the actress and teacher Adriana Barraza.

WHAT: The 36th International Hispanic Theatre Festival: “Are You There, Bette Davis?” from Uruguay, “Scorpion of The Ceremony,” from Spain, “Brief Encounters with Repulsive Men” from Chile, “Broken” from Argentina, “Quintuplets” from Puerto Rico, “The Colors of Frida” and “I’d Better Shut Up” from U.S.A.