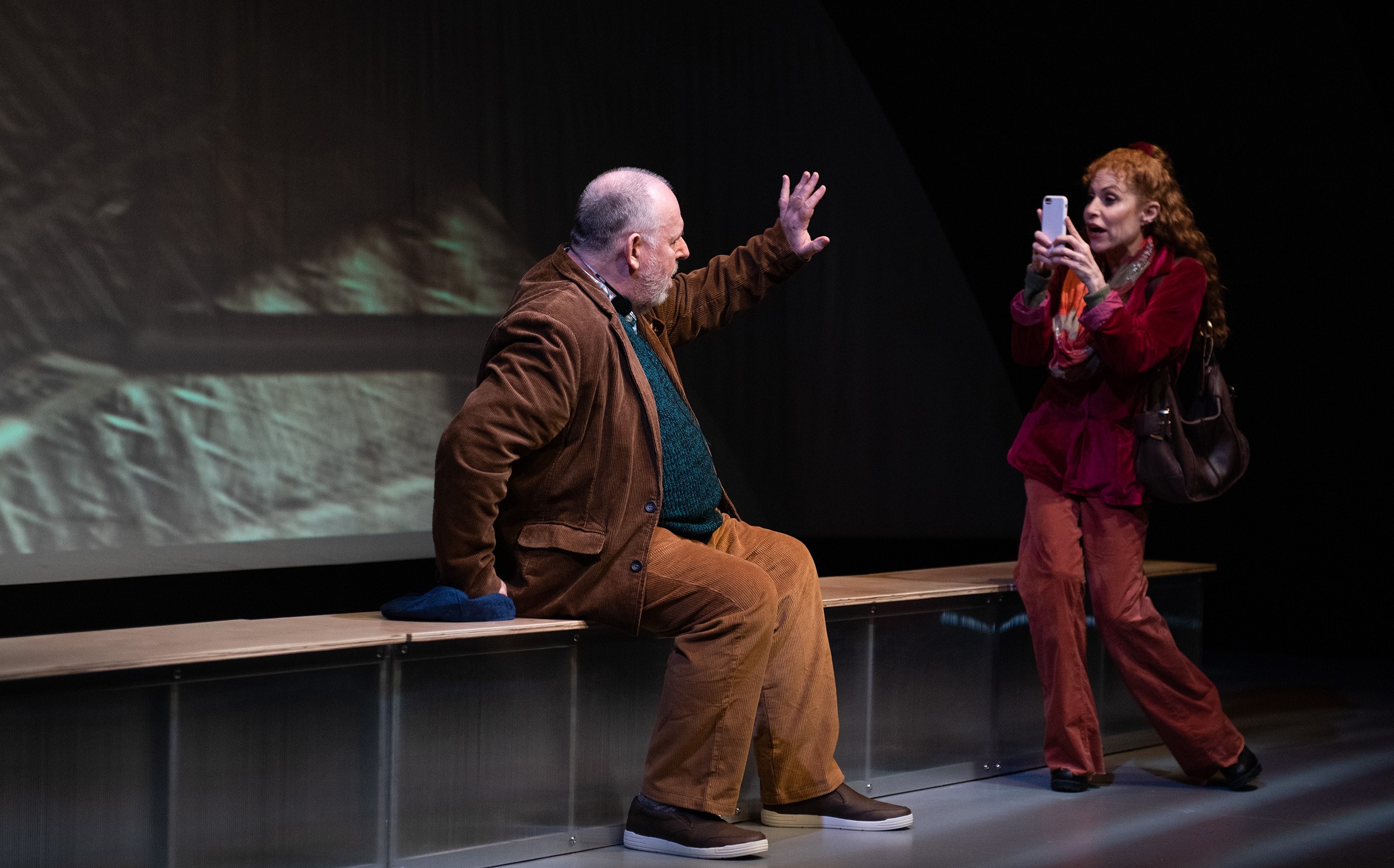 Colin McPhillamy as Alex resists Margery Lowe as Georgie taking his photo in “Heisenberg” at GableStage. Photo by Magnus Stark.

Science and art sometimes collide – or coalesce, maybe – when a playwright decides to craft a drama suffused with an idea from the world of physics.

Nick Payne did it in “Constellations.” Simon Stephens, who adapted “The Curious Incident of the Dog in the Night-Time” into a Tony (and Olivier) Award-winning play, uses the device in “Heisenberg,” a two-hander which has just kicked off the 2022-23 season at GableStage.

Producing artistic director Bari Newport explains in her program notes German physicist Werner Heisenberg’s 1927 uncertainty principle this way: “…the uncertainty principle states that we cannot know both the position and speed of an object with perfect accuracy; the more we nail down the object’s position, the less we know about its speed and vice versa.”

The woman in the play, she adds, has “speed but no anchor.” The man is “stuck,” with no clear way forward.

So of course, in the way these things tend to go, the two meet and change each other’s lives.

A few things to know about the 80-minute play, which was done Off-Broadway in 2015 and on Broadway in 2016: You needn’t understand physics in general or the uncertainty principle specifically to experience and enjoy “Heisenberg.” There is no connection between Walter White’s drug alias in “Breaking Bad” and the play title. And you won’t learn anything about Werner Heisenberg – for that, turn to Wikipedia or read the script of Michael Frayn’s “Copenhagen.”

Staged by Newport, “Heisenberg” plays out over six scenes as strangers in London become, however improbably, the life-changing answer to unspoken prayers. 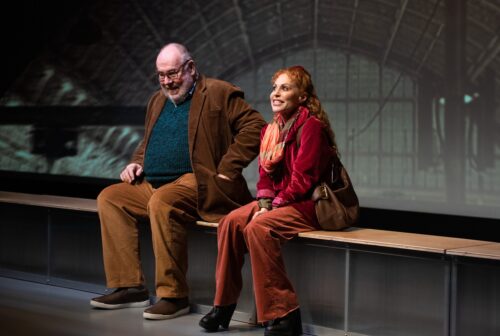 Colin McPhillamy as Alex is briefly bemused by Margery Lowe’s Georgie in “Heisenberg” at GableStage. Photo by Magnus Stark

Georgie Burns (Margery Lowe) is a kooky, potty-mouthed 42-year-old American who speaks at two volumes: loud and louder. Alex Priest (Colin McPhillamy) is a 75-year-old British butcher whose accent ever so slightly hints at his childhood in Ireland.

They don’t meet cute, as characters so often do in the movies. Instead, before the lights go up, Alex is sitting on a bench at St. Pancras railway station, minding his own business as he listens to music. Georgie walks up behind him and kisses the back of his neck. Then the play begins, with Alex rattled and Georgie apologetic.

Revelations come quickly from Georgie, who abhors silence, but her sometimes outlandish claims are those of a self-confessed liar, so who knows which autobiographical nuggets are true? At one point she asks Alex, “Do you find me exhausting but captivating?” Yes to the first part. 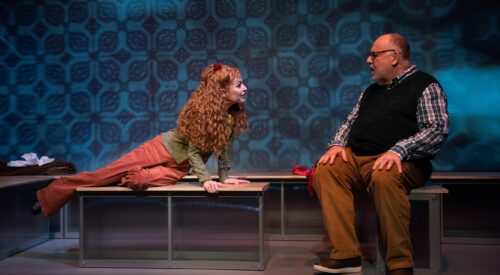 Alex, on the other hand, takes time to loosen up and begin sharing, a process that accelerates a wee bit after the two have sex. He’s a contemplative type who experienced too much loss in youth and thus created an ordered, isolated existence for himself. But Georgie is wrong when she tells him, “You’re not so much a creature of routine as a psychopathic raging monster of it.” Um, no he’s not.

Secrets are embedded in “Heisenberg,” secrets that it wouldn’t be fair to share. See the play if you’re curious as to how these two, so different in age and personality, deal with the unexpected turns in their lives.

Newport and her design collaborators have kept the look of play’s world simple, largely using black-and-white projections by Alessandra Cronin along the back wall of Frank J. Oliva’s archway set. Clear rectangular cubes, moved before each scene by silent black-clad figures, become everything from a railway bench to Alex’s bed. Sean McGinley provides the sounds of trains, traffic, Alex’s beloved Sonata for Violin and Piano in B Minor by Bach. Lighting designer Tony Galaska enhances each scene’s mood. 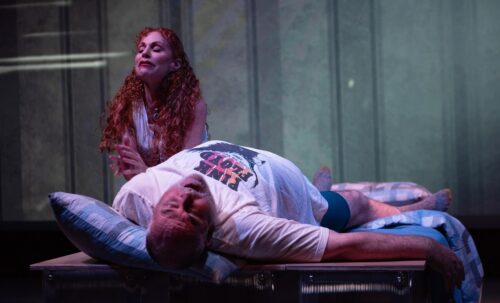 Margery Lowe as Georgie and Colin McPhillamy as Alex enjoy some bedded bliss in “Heisenberg” at GableStage. Photo by Magnus Stark

In New York, Georgie Burns (a nod to the late, legendary comedian?) was played by Mary Louise Parker, who does irresistible craziness as well as anybody. Lowe, who urged Newport to produce “Heisenberg,” puts her own spin a role designed by Stephens to be big and, now and then, alienating. This performance is thus as far away as possible from the dreamy, layered complexity Lowe conveyed as in her much lauded-turn as Emily Dickinson in “The Belle of Amherst” at Palm Beach Dramaworks.

Even Camilla Haith’s costumes for Georgie seem to yell, “Look at me! I’m eccentric!” Lowe’s Georgie is seldom still, a physical match to her verbal excess. In part because of that, when she has a quiet, truthful, revelatory moment, it lands with far more emotional impact, as when she confesses the pain in her estrangement with her son: “I don’t know what I’m supposed to have done wrong.” 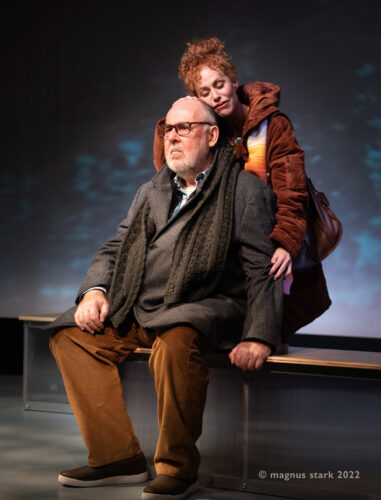 McPhillamy, whose lengthy acting resume includes Broadway, London, major regional theaters and many a South Florida theater company, is a master craftsman when it comes to rich silences and painting pictures with words. His Alex slowly thaws, rejoins the living despite the comparative brevity of the life remaining to him. When he takes Lowe’s Georgie into his arms for a dance (beautifully choreographed by Jeni Hacker), the moment becomes a physicalized sigh of joy and relief.

Whether you experience “Heisenberg” through the more challenging lens of a play rooted in the uncertainty principle or decide to watch an unlikely relationship play out, know this: Stephens has layered plenty of truths about navigating life into his script, truths illuminated by Newport, Lowe and McPhillamy.

ArtburstMiami.com is a non-profit source of theater, dance, music, film and performing arts news. Sign up for our newsletter and never miss a story.