An Amazing Stroll Through a ‘Sunday in the Park With George’ 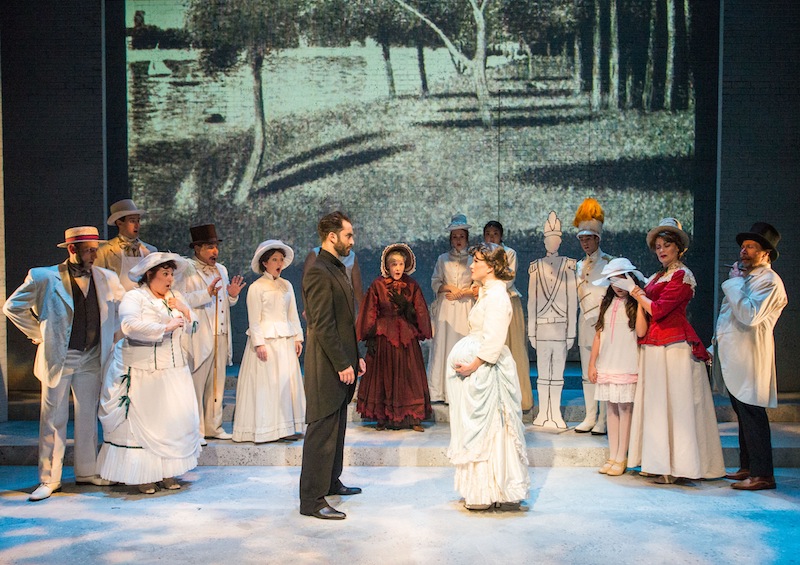 Neo-Impressionist Georges Seurat was an influential visionary whose pointillist work launched a movement before his untimely death in Paris in 1891 at the age of 31. He spent two years painting his masterpiece, “A Sunday Afternoon on the Island of La Grande Jatte,” in which tiny dots of juxtaposed color viewed at the right distance transform into a host of Parisians relaxing on an island in the middle of the Seine.

Nearly a century later, Seurat and his painting influenced artists in another medium – composer-lyricist Stephen Sondheim and librettist-director James Lapine – to create their own interpretation of the man and his monumental work.

“Sunday in the Park With George” bowed on Broadway in 1984, earning its creators the Pulitzer Prize in 1985. The intricate, challenging musical was revived on Broadway in 2008 and will land there again (Feb. 11-23 at the reopened Hudson Theatre) with Jake Gyllenhaal as Georges and Annaleigh Ashford as his mistress Dot.

But you needn’t wait until next month or spend big Broadway bucks to experience a gloriously sung, impressive production of “Sunday in the Park With George.”

Miami’s Zoetic Stage, which has just received five Carbonell Award nominations for its production of Sondheim and Lapine’s “Passion” last season, opened its production of “Sunday in the Park” at the Arsht Center’s Carnival Studio Theater over the weekend. Though the show and its run dates were chosen many months ago, its presence at a time when the country’s 45th president wants to wipe out funding for the National Endowment for the Arts serves as a vivid reminder of the power of art.

As Sondheim observes in the number “Putting It Together,” art isn’t easy. Illustrated through the show’s depiction of Seurat, the road to a masterwork can be paved with obsession, rejection, incomprehension, criticism and collateral cruelty. Yet the great art itself – Seurat’s painting, this musical – endures, provokes and inspires many generations.

Lapine, with edgy roots in the Off-Broadway world, and Sondheim, that brilliant Broadway baby, created a musical theater version of Seurat’s pointillism for “Sunday in the Park With George.” Some of the dialogue, music and minor figures are staccato or fragmentary. Blended with the stories of the major characters and with such gorgeous songs as “Beautiful,” “Sunday,” “Children and Art” and the stirring “Move On,” the pieces are assembled into a grandly impactful whole, much as the show’s obsessive Seurat does in creating his masterwork.

Director Stuart Meltzer, who is the behind-the-scenes Seurat of this production, does his own blending with the “Sunday in the Park” company. He has cast New Yorkers Cooper Grodin and Kimberly Doreen Burns as Georges and Dot, utilizes a powerful array of South Florida talent in other roles, and gives several University of Miami musical theater majors the chance to perform alongside the pros.

Grodin, who played the title role in the touring version of “The Phantom of the Opera” at the Broward Center just over two years ago, has the Herculean task of portraying an artist more comfortable with paints than with people.

He manages to be both passionate and cool as he illustrates the artist’s single-minded devotion to creation in “Finishing the Hat.” Emotionally distant, manipulative and finally cruel toward his mistress, this Seurat cannot connect the dots of life.Playing Seurat’s invented great-grandson, another artist named George, in the show’s century-hopping second act, Grodin creates a warmer if no less driven and frustrated soul.

As Dot, the show’s fictionalized version of Seurat’s secret mistress Madeleine Knobloch, Burns is a luminous life force with a crystalline soprano voice. Insecure, fun-loving and as drawn to Georges as he is to his art, Dot becomes pregnant with his daughter Marie, then painfully turns away from him for a life in America with a new beau who dotes on her. (The real Seurat, it should be noted, fathered two sons who died as babies, and thus had no other descendants.)

Also playing a 98-year-old version of Marie in the second act, Burns provides the show’s warm colors, Grodin the cool ones.But when the two sing the dazzling “Move On” together, the show soars into a transcendent emotional place that is the very definition of thrilling musical theater.

Two of the stars of Zoetic’s “Passion” are back for “Sunday in the Park.” Carbonell-nominated Jeni Hacker plays the German cook Frieda and a 20th century artist named Betty, and Anna Lise Jensen portrays Yvonne, the gossipy wife of Seurat’s “friend” and powerful rival artist Jules. He’s played by Stephen G. Anthony with just the right mixture of faux friendliness and condescension. (In the second act, Jensen is a wild-eyed composer, Anthony a museum director anxious to keep his institution’s show and fundraising on track.)

The powerful cast also features Carbonell winners Margot Moreland as the nurse to Seurat’s mother, a gauche pastry-loving American wife and a museum board member; Carol Caselle as the artist’s elderly mother and an art critic who accuses 20th century George of repeating himself; and Chaz Mena as the randy, scene-stealing German coachman Franz and then as Dennis, the technical wizard who makes the work of Seurat’s great-grandson – lighted sculptural pieces called “Chromolumes” – work properly.

Michael Scott Ross endearingly plays Dot’s adoring baker beau Louis as well as a pal of Moreland’s contemporary character. Michael Freshko is the surly boatman, then a visiting curator. Rick Hvizdak is the loud American tourist in the first act, a museum publicist in the second. Kelly Gabrielle Murphy plays a gossiping girl named Celeste, then the ex-wife of George; Jayne Ng is another gossip named Celeste, then a waitress; Jonah Robinson is first a soldier, then a contemporary artist; and Lucia Fernández de los Muros is amusing and pointedly annoyed as the little girl in Seurat’s painting.

Offstage, Eric Alsford (who is the show’s musical director, conductor and keyboard player) and four other musicians sound like a much larger ensemble, superbly handling Sondheim’s challenging score.

The design elements of the piece, essentially involving the re-creation of a famous work of art that now hangs in the Art Institute of Chicago, present their own challenges, here impressively met by the Zoetic team.

Michael McClain’s set is the “blank canvas” (a faux-marble stage and faux-brick white walls) which will be filled with Seurat’s images and theatrical art. Greg Duffy’s animation design summons any number of Seurat sketches, as well as the various elements of the painting. Rebecca Montero creates her own art with light, Dan Mayer with sound (just listen to the birds softly singing in the park), Angelina Esposito with costumes that evolve piece-by-piece from blank-canvas white to Seurat’s memorable color palette (though her black-dominant costumes for the museum scene aren’t nearly as impressive).

Sondheim’s work, distancing to some, inspiring passionate intellectual and emotional engagement in others, is art. In Lapine, he found the ideal collaborator for a piece about a genius who found it more urgent to create than to connect. Zoetic’s lovingly rendered production of “Sunday in the Park With George,” however, makes and sparks myriad connections – because that’s what great art does.

‘Sunday in the Park With George’ by Stephen Sondheim and James Lapine, Zoetic Stage production in the Carnival Studio Theater at the Adrienne Arsht Center for the Performing Arts, 1300 Biscayne Blvd., Miami; 7:30 p.m. Wednesday-Saturday, 4 p.m. Sunday, through Feb. 12. Cost:$50 and $55; 305-949-6722 or www.arshtcenter.org.