‘An Act of God’ Review 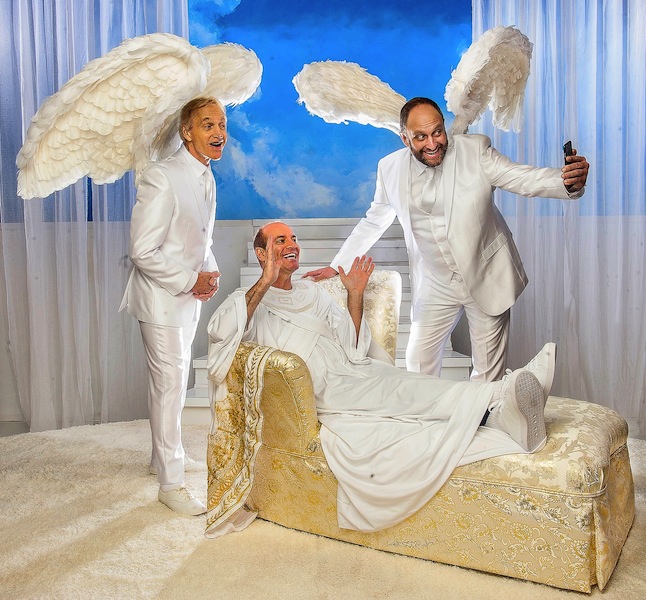 Listen up, humanity. God has a bone (or 10) to pick with us, and we’d best pay attention. I mean, if he can zap the wing off an argumentative archangel – and he can – just imagine what’s in store for us.

Or simply consider the news, post-election.

David Javerbaum, the Emmy Award-winning executive producer and head writer of Comedy Central’s much-missed “The Daily Show with Jon Stewart,” conjures up a revisionist, sardonic, truth-telling deity in his 90-minute play “An Act of God.”

Now launching GableStage’s 19th season at the Biltmore Hotel, the show puts the Lord front and center (on a fabulous gold-and-white chaise longue) to deliver a revised version of the Ten Commandments. He’s had it with the original 10, he confesses, much as he imagines Don McLean has grown weary of singing “American Pie.”

To clarify, as the Divine One is wont to do, it’s not actually God dispensing wisdom on Lyle Baskin’s talk show-meets-Vegas set. God lets us know that he has borrowed the corporeal form of actor Tom Wahl – tall, handsome, likeable and balding – to portray him, though he says Wahl is unaware of that fact.

Javerbaum’s God has a pair of sidekicks or “wing men,” the archangel Gabriel (Kevin Reilley) and archangel Michael (Gregg Weiner). Gabriel consults what is allegedly the original 1455 Gutenberg Bible to clarify theological points. Michael takes “questions” from audience members, though he really just asks a person’s name, intuits his or her query, then conveys it to God.He’s a feisty one, that Michael, and as the show goes on, he dispenses with the audience questions and focuses directly on busting God’s chops.

That GableStage producing artistic director Joseph Adler would be drawn to “An Act of God” isn’t in the least bit surprising. The play is squarely in his irreverent wheelhouse, a challenging and provocative work that will thrill or resonate with many even as it annoys or offends others. Making audiences think or talk or react is what drives Adler as an artist.

First played in New York by “Big Bang Theory” star Jim Parsons, then by Sean Hayes of “Will & Grace” fame, the title character in “An Act of God” can be ingratiating ala Parsons or sassy like Hayes – you know, it’s God, so the role is open to interpretation.

Wahl brings the funny, and anyone who has seen him in City Theatre’s Summer Shorts knows what a great comic actor he is. But he’s also a dramatic actor with depth, winning a Carbonell Award for “I Am My Own Wife” and most recently creating the role of an emotionally distant father in the world premiere of Michael McKeever’s “After.” He plays God with an edge, as an entity who alternates corny jokes and gasp-inducing ones, as a self-questioning deity who has wondered more than once, “What the hell is wrong with me?”

Wahl has fine foils in Reilley’s soothing Gabriel and Weiner’s expertly challenging Michael, both archangels nattily attired by costume designer Ellis Tillman in all-white suits which accommodate the curving white wings sprouting from their backs. Lighting designer Jeff Quinn creates the sunny brightness to complement the puffy cloud-bedecked vista at the center of Baskin’s set, as well as stairs that light up – even change colors – as God’s feet touch them. Matt Corey’s sound and music design are heavenly, too.

In “An Act of God,” the Creator offers a revised Ten Commandments, keeping the best of his originals but ending with the upbeat notion that “thou shalt believe in thyself.” A snappy song, “I Have Faith in You,” underscores the sentiment, but Wahl (whose mic wasn’t adjusted quite right), Weiner and Reilley aren’t exactly musical theater stars, so the number doesn’t supply as much uplifting closure as it should.

The devout and those with delicate sensibilities should steer clear of “An Act of God,” because what Wahl-as-God says about such things as the link between the Holocaust and “Cabaret,” for instance, will strike some as jaw-droppingly offensive.

On the other hand, when he says of America, “Never underestimate the power of stupid people in large groups?” Amen to that.