“All the Way:” How Pres. Johnson Pushed the Landmark Civil Rights Act 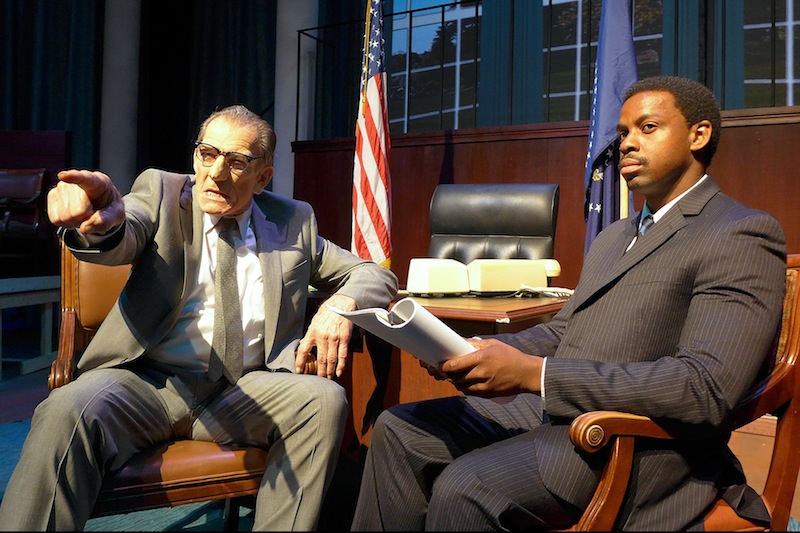 That Actors’ Playhouse opened its production of Robert Schenkkan’s “All the Way” on the same day that the American Health Care Act was pulled from a vote by the House of Representatives is ironic and more than a little instructive.

The much-touted replacement for Obamacare didn’t have enough sure votes to ensure passage, as Speaker Paul Ryan told President Donald Trump, so the “replace” part of the administration’s vow to repeal and replace the Affordable Care Act is dead for the moment as the nation waits to see whether Trump’s prediction about the implosion of Obamacare comes to pass.

Meanwhile, on the stage of the Miracle Theatre in Coral Gables, J. Kenneth Campbell as President Lyndon Baines Johnson – LBJ – is acting his way through a master class on political wheeling and dealing. “All the Way” focuses on the myriad challenges Johnson faced as he pushed the landmark Civil Rights Act of 1964 through a contentious Congress, way back when the art of the political deal still seemed possible.

Though the play’s time span is just the first year of Johnson’s presidency, which lasted from the day the then-Vice President took office in 1963 after the assassination of President John F. Kennedy until the end of his only elected term in 1969, “All the Way” itself is anything but compact.

In his pre-opening remarks, director David Arisco described the drama as “epic.” Others might call it “long,” and they would be correct. Schenkkan, who won the Pulitzer Prize for his marathon seven-hour masterwork “The Kentucky Cycle,” does not write short, and the Tony Award-winning “All the Way” clocks in at about three hours. Could it use some editing? Most definitely, in part because some among its vast array of characters amount to little more than sketchy cameos.

The play is a sprawling history lesson anchored by Campbell’s kinetic, persuasive, foul-mouthed LBJ.Bryan Cranston of “Breaking Bad” fame did the honors on Broadway in 2014, winning the best actor Tony, and again in a 2016 version for HBO. Campbell has a long list of Broadway, regional theater, television and movie credits, and he achieves enough of a vocal and physical resemblance to Johnson that it’s easy to go with his portrayal. But the actor playing LBJ has a huge amount of dialogue, and in the opening performance, Campbell wasn’t rock solid with all of it (nor were a few other actors). When a performer is fishing for words, it pulls him and the audience out of the moment, just what you don’t want when watching a political warrior like Johnson.

That said, Campbell is often wry and compelling, adroitly menacing as he asks more than one potential foe, “Are you threatening me?” The man who earned his political bones in the House and Senate is masterful at dangling rewards for compliance and at making plain that defiance will bring retribution. No Tweets, no bigly boasts, no alternative facts for this commander-in-chief, who freely admits it when he makes up a story to suit his purpose.

To convey the sweep of history, a cast of 17 plays dozens of characters, with only Campbell, Marckenson Charles as the Rev. Martin Luther King Jr. and Don Juan Seward II as the Rev. Ralph Abernathy confined to a single major role. Charles, a Carbonell Award winner who started his career in South Florida, adds to his admirable performances with his portrayal of the workaholic civil rights icon, a man he imbues with gravitas, spiritual conviction and, briefly, the weakness of the flesh.

Tom Wahl shows his range as Humphrey, who gets the carrot of the vice presidency dangled at him by Johnson, and as southern senator Strom Thurmond, who’s about to jump to the Republican party over this civil rights business. Michael Turner is compelling as LBJ’s omnipresent aide Walter Jenkins, a married Catholic father with a ruinous secret, and Peter Haig is charming as LBJ’s longtime friend and political touchstone, Senator Richard Russell of Georgia.

The often-contentious scenes focused on leaders of the civil rights movement are among the most absorbing in the play. That’s in no small part because of the work of Charles and Seward, of course, but also because of the dynamic performances of Reggie Whitehead as the more cautious NAACP director Roy Wilkins, Jovon Jacobs as Stokely Carmichael, and Chase Gutzmore as Bob Moses and David Dennis. Riveting when they speak, Jacobs and Gutzmore become galvanizing firebrands.

Jodi Dellaventura’s stately set adapts to become everything from the Oval Office to a church, though some facets of it (LBJ going to sleep in the White House on what looks like a twin trundle bed) don’t quite work. Shaun Mitchell, the sound and projection designer, enhances the storytelling with vintage photos and news footage, the most chilling chronicling the horrific murders of Michael Schwerner, Andrew Goodman and James Chaney as the three were working to register black voters in Mississippi. Lighting designer Eric Nelson and costume designer Ellis Tillman, who has created a huge array of stylish vintage looks, complete the early ‘60s picture.

Given our current political and ideological divides, given the eruptions of racial and religious or ethnic turmoil in America 2017, “All the Way” offers an instructive chance to look back at a president determined to make the nation more just for all its citizens. What a difference half a century makes.