‘After’ Devastating Probe Into Bullying, Violence 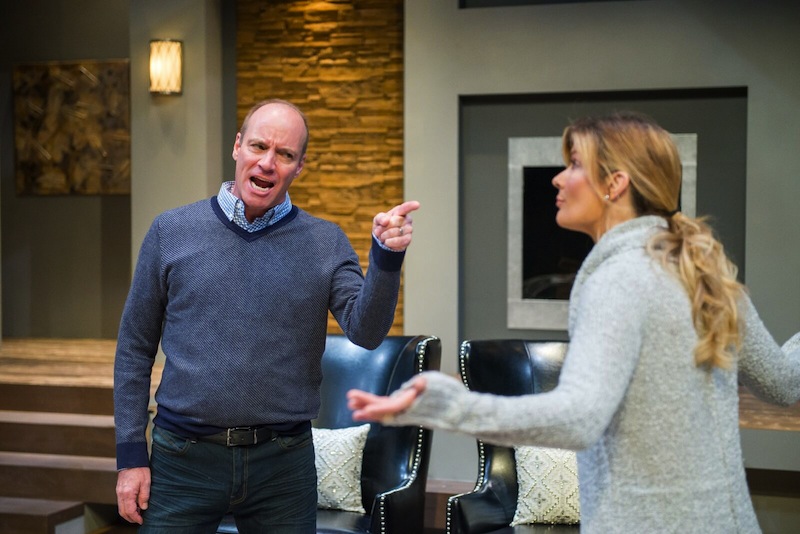 The words that South Florida playwright Michael McKeever has chosen for his intense new play ‘After’ are powerful indeed. They would have to be, since his Zoetic Stage world premiere at Miami’s Arsht Center is a devastating piece about bullying, school violence and the moment when one horrific act destroys two families.

But just as powerful as the words in “After” are the silences, as looks convey judgment or a host of thoughts unspoken.

One wordless sequence late in the play is nearly as unbearable for the audience as it is for the father whose world is shattered by a two-page letter from his ruined, estranged son.

Playing a man roiling with self-doubt, denial and fury, actor Tom Wahl picks up the letter and begins to read, at first fidgeting and looking irritated. Then he transforms, reading silently as words that are never revealed eviscerate him, causing him to cry out, then weep. Director Stuart Meltzer and Wahl take the time to allow that long moment its excruciating, devastating power.

“After” is, in fact, every bit as powerful and accomplished as “Daniel’s Husband,” McKeever’s award-winning play about marriage equality that will have its Off-Broadway premiere in the spring. The playwright’s 25th full-length drama is the work of a man who has learned to expertly combine dashes of humor, topicality, engaging characters and layered storytelling to create deeply impactful theater.

Similarly, Zoetic’s production of “After” is the work of artists at the top of their game.

On the design side, Carbonell Award winner Michael McClain has created a breathtaking set that looks like the elegant upscale living room of a woman obsessed with perfection. The visual eloquence of Rebecca Montero’s lighting design, the character-defining work of costume designer Angelina Esposito and Meltzer’s subtle sound design are of a piece with that dazzling set.

As for the actors, the performers are so in synch with their characters that you might suspect their roles were tailored to their talents – and in part, they were. McKeever was still writing “After” when Mia Matthews and Wahl were cast as Julia and Tate Campbell, occupants of that elegant home; when Jeni Hacker and McKeever were chosen to play Connie and Alan Beckman, parents of a bullied teen; and when Karen Stephens was picked to play Val Wallace, a single mom reluctantly dragged into her friend Julia’s family drama. The playwright had known all of the artists through their work at Zoetic and elsewhere, so in collaboration with director Meltzer, “After” offers a superb example of actors fully, intricately inhabiting their characters.

The 90-minute story they tell is divided into three scenes (or “movements,” as Meltzer calls them) titled “Before,” “During” and “After.”

Initially, the Campbells and Beckmans come together because the Campbells’ son Kyle has sent a threatening text to the Beckmans’ son Matthew, earning Kyle a three-day suspension from the private school both boys attend.Julia wants to make nice and have Kyle apologize to Matthew. Connie will settle for nothing less than the scorched-earth option of Kyle expelled.Thus, a tragedy is set in motion.

In “After,” McKeever artfully explores the intense challenges and conflicting styles of raising kids in a world where bullying – cyber and in-person – is commonplace.He offers a chilling example of how a perceived threat can cause life to shift on a dime and become irrevocably altered.Over the course of the play, he stirs empathy for each character, deepening the audience’s understanding of them through powerful speeches.

Wahl and McKeever effectively play very different guys, Wahl’s Tate being emotionally disengaged from his wife and son, McKeever’s less successful Alan clearly the richer man in terms of his solid relationship with his family.

But it is the work of the play’s women, portraying characters with very different styles of mothering, that elevates and deepens the dramatic power of “After” – Hacker, with her stinging humor and fierce protectiveness as Connie; Matthews, with an obsessiveness born of pain as Julia; and Stephens, whose whip-smart Val is raising two boys just fine on her own, thank you very much.

Some people want nothing more than escapist entertainment when they go to the theater. “After” is for those who want to feel deeply, be thoroughly drawn into the world of a play and find themselves thinking about a work of theatrical art long after the performance ends.