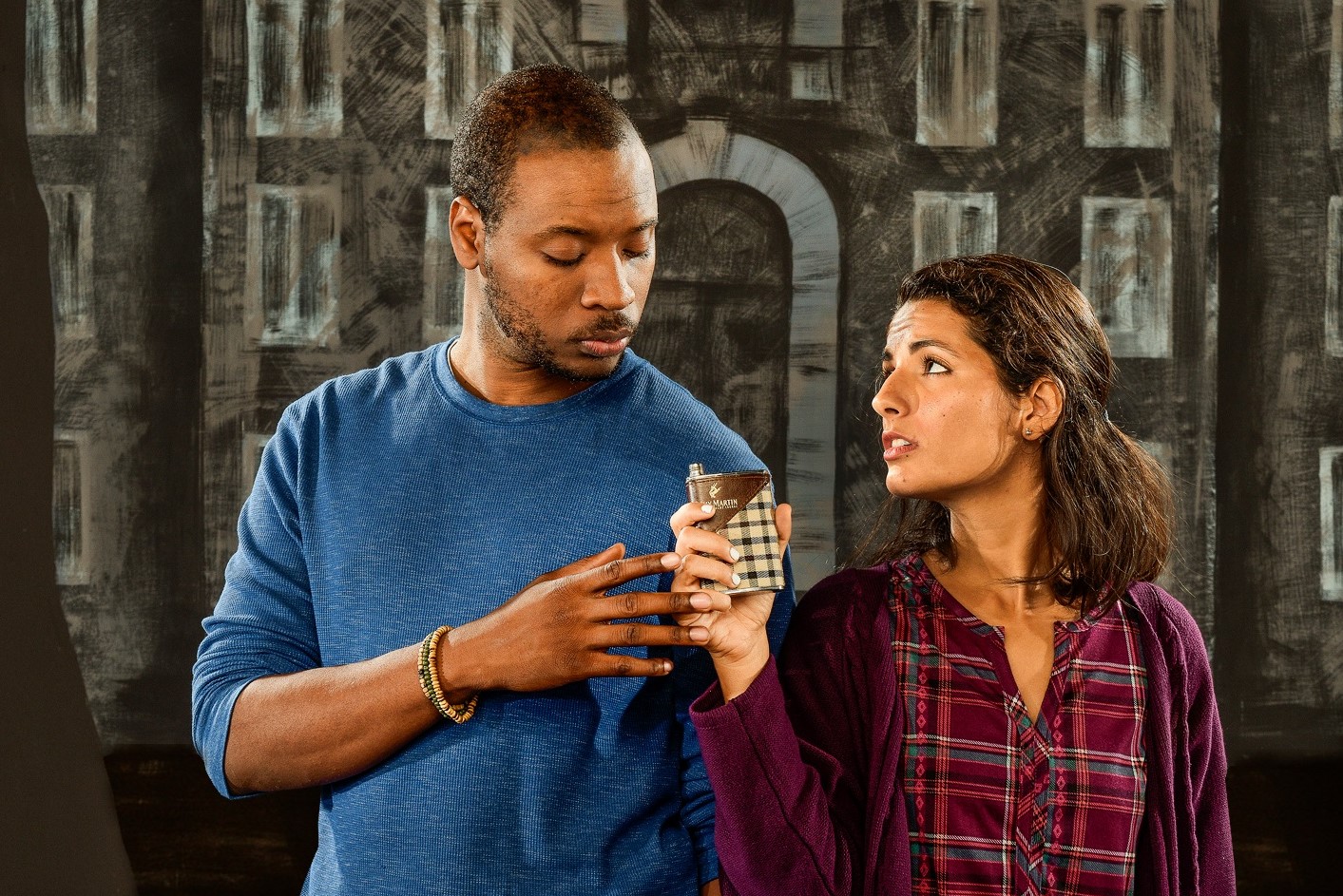 “Actually,” the title of the taut and provocative Anna Ziegler play that has just opened at GableStage, is a critical word in the two-character drama about a campus hookup gone wrong.

It refers to the way a Princeton University freshman named Amber (Maria Corina Ramirez) believes she withdrew consent when she and her classmate Tom (Joshua Jean-Baptiste) had drunken sex on the bottom bunk in his dorm room as his way cool roommate Jason was “asleep” above them.

The title also refers to the debatable, alcohol-fuzzy “facts” of what actually happened that night – facts remembered differently by Tom and by Amber, who subsequently reported the encounter as a rape.  The aftermath, as you might imagine, brings a world of hurt into the lives of two young people who have barely begun their studies at their golden-ticket Ivy League school.

Staged with intricate nuance, insight and grace by Gail S. Garrisan, “Actually” features two accomplished pros who were once her students at Miami’s New World School of the Arts. The actors, along with Edson Jean, are the writers and stars of the Complex.com series “Grown,” about young Haitian-Americans in Miami.  Jean-Baptiste and Ramirez have an undeniable chemistry and ease with each other, yet they enter the world of he said/she said with shattering ferocity.

Ziegler’s densely packed script is, by turns, unsettling, manipulative and amusing.  That Tom, a confident black student who loves the piano, classical music and sampling what seems to be the sexual smorgasbord of college life, would hook up with Amber, a nervously verbose Jewish girl with deep insecurities, seems counterintuitive, since he’s not particularly attracted to her.

Yet once the two add alcohol to the mix – and once Amber introduces the possibility of sex, insisting Tom play Two Truths and a Lie if he wants to sleep with her that night – the stage is set for their fateful, complicated encounter.

What happens to Tom and Amber in “Actually” isn’t like the shocking Brock Turner case at Stanford.  Both are summoned to testify before a Princeton faculty tribunal, Tom genuinely puzzled about why Amber filed a complaint, the incessantly talkative Amber narrowly responsive thanks to the lawyer by her side.

Yet the challenging structure of Ziegler’s 90-minute play, which mixes scenes and monologues, yields lots of information, if not a definitive answer about what actually happened.

As with other productions of “Actually,” the presentational style of GableStage’s version is visually simple. Set designer Lyle Baskin contributes a painted backdrop suggesting Princeton’s New Jersey campus, with a low wall creating a diorama effect. The “furniture” consists of two office chairs. Steve Welsh’s lighting and Matt Corey’s sound design help intensify or soften scenes, with Garrisan getting costume credit for the clothes that look right for each character – he’s preppy, she seems to be hiding within her oversized sweater.  Simple.

So it is left to the two actors to create vividly detailed images as they turn their skills to Ziegler’s words.

Jean-Baptiste gives us a young man who came from nothing, a guy with game who finds himself in hot water – not for the first time – over what he sees as consensual sex.  He paints a picture of Sunil, Tom’s best friend who looks like “an Indian Channing Tatum,” and the complexity of their relationship. He slips into the voices of Tom’s mother and his hipster roommate Jason, and he makes us feel how deeply Tom is transported by music.

The striking Ramirez transforms herself into a jittery plain Jane.  Describing Amber’s first sexual encounter and its aftermath in predictably intricate detail, she drops information that explains why Tom’s roomie Jason might have thought she wasn’t conscious enough to give consent.  Her tears, as she conveys Amber’s lonely feeling of invisibility, are real and heartbreaking.

Insightful about its painful, timely subject, “Actually” requires the imaginative intellectual engagement of its audience.  Because the characters meet in a psychology class, Ziegler has Amber talk about something called “the Pratfall Effect,” and though she defines it, referencing it doesn’t particularly deepen our understanding of the characters’ relationship.  That said, Jean-Baptiste, Ramirez and Garrisan navigate the drama of “Actually” in a thoroughly engaging way.