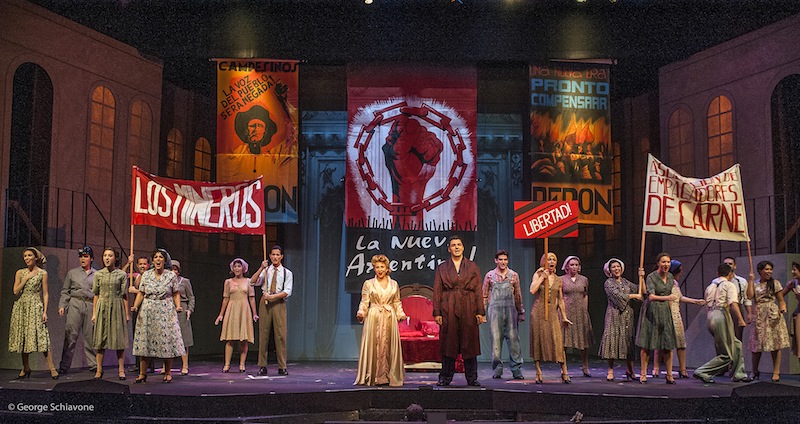 Actors’ Playhouse has been a musical powerhouse for much of its history. Launching its 30th anniversary season at the Miracle Theatre in Coral Gables, the company is revisiting some of that history with a new production of a made-for-South Florida favorite: Andrew Lloyd Webber and Tim Rice’s “Evita.”

As it did in 2000 when recent Tony Award winner Rachel Bay Jones starred as Eva Duarte de Perón, Actors’ is presenting the Tony-winning musical in both English (through Nov. 26) and Spanish (Nov. 30-Dec. 17). The large cast, including powerful leads Andrea Pilar as Eva, Eugenio Vargas as Che and Samuel Druhora as Juan Perón, will perform both versions.

The bottom line? Theater lovers who choose to experience this 1978 Lloyd Webber-Rice show – whether for the first time or the 50th, whether in English or Spanish – are in for a treat.

Director David Arisco and his design team utilize 21st century theater technology to tell a story that begins with the announcement of Eva’s death in 1952, then flashes back to explore her route to power alongside Argentine president Juan Perón.

Set designer Gene Seyffer has created a largely blank canvas of stairs and soaring walls with the suggestion of windows and doorways. The playing area gets repeatedly transformed through the work of prop designer-set dresser Jodi Dellaventura and, most notably, via projections by sound-projection designer Shaun Mitchell. Mitchell’s images, which include historical photos, suggest everything from the little nightclub in Junin where a 15-year-old Eva Duarte meets tango singer Agustín Magaldi (Joshua Dobarganes) to the palatial Casa Rosada, where the glamorous and faux humble first lady sings “Don’t Cry for Me Argentina” from the balcony.

Designer Ellis Tillman has created a vast array of costumes for the 28 adult actors and six children in the cast, and as always, his eloquent artistic work communicates a great deal about place, era and social status. Eric Nelson’s lighting is both sunny and somber, as the story demands.

Collaborating with Arisco, musical director David Nagy leads an eight-piece band which, along with the vocal power of the far larger cast, delivers the richness of Lloyd Webber’s stylistically varied score. Choreographer Ron Hutchins offers his ibrilliant game of musical (rocking) chairs symbolizing Peron’s rise to power on “The Art of the Possible.”

Because “Evita” is almost all music, the show demands performers with great voices – and Arisco has assembled a company that delivers.

The petite Pilar is a warmly charismatic Eva as she conveys the many facets of a woman who was shunned by Argentina’s social and military elite but revered by workers and the impoverished descamisados she championed. Nakedly ambitious, glamorous and finally defeated by the cancer she couldn’t vanquish, Pilar’s Eva is the force of nature the show requires.

As Che, the cynical one-man Greek “chorus” who represents opposition to all things Perón, Vargas sings well but doesn’t have as much ferocity as some who have played the revolutionary inspired by Che Guevara.

Druhora, on the other hand, is an extraordinary Juan Perón. Experienced in opera as well as musical theater, the actor sings Perón’s songs with magnificent command. Striking and significantly taller than Pilar, he shines in a role often eclipsed by the focus on the musical’s title subject.

Also notable are Kelly Ziegler, who delivers the plaintive “Another Suitcase in Another Hall” as Perón’s young mistress, and Dobarganes, who acts and sings very well except during the performance in the Junin club, when he has been directed to play Magaldi as a cheesy lounge singer. Nicole Coffaro, Diana D’Ambrosio, Rodrigo de la Rosa, Brent D. Kuenning, Taylor Hilt Mitchell, Francisco Padura and Brian Varela play key roles in an ensemble brimming with talent.

With its soaring score (arguably the best by Lloyd Webber and Rice) and its focus on a glamorous woman with a carefully shaped image – a woman who would doubtless be daily internet fodder were she alive today – “Evita” remains a musical worth experiencing. Certainly, that’s true of the Actors’ Playhouse anniversary version of the show.