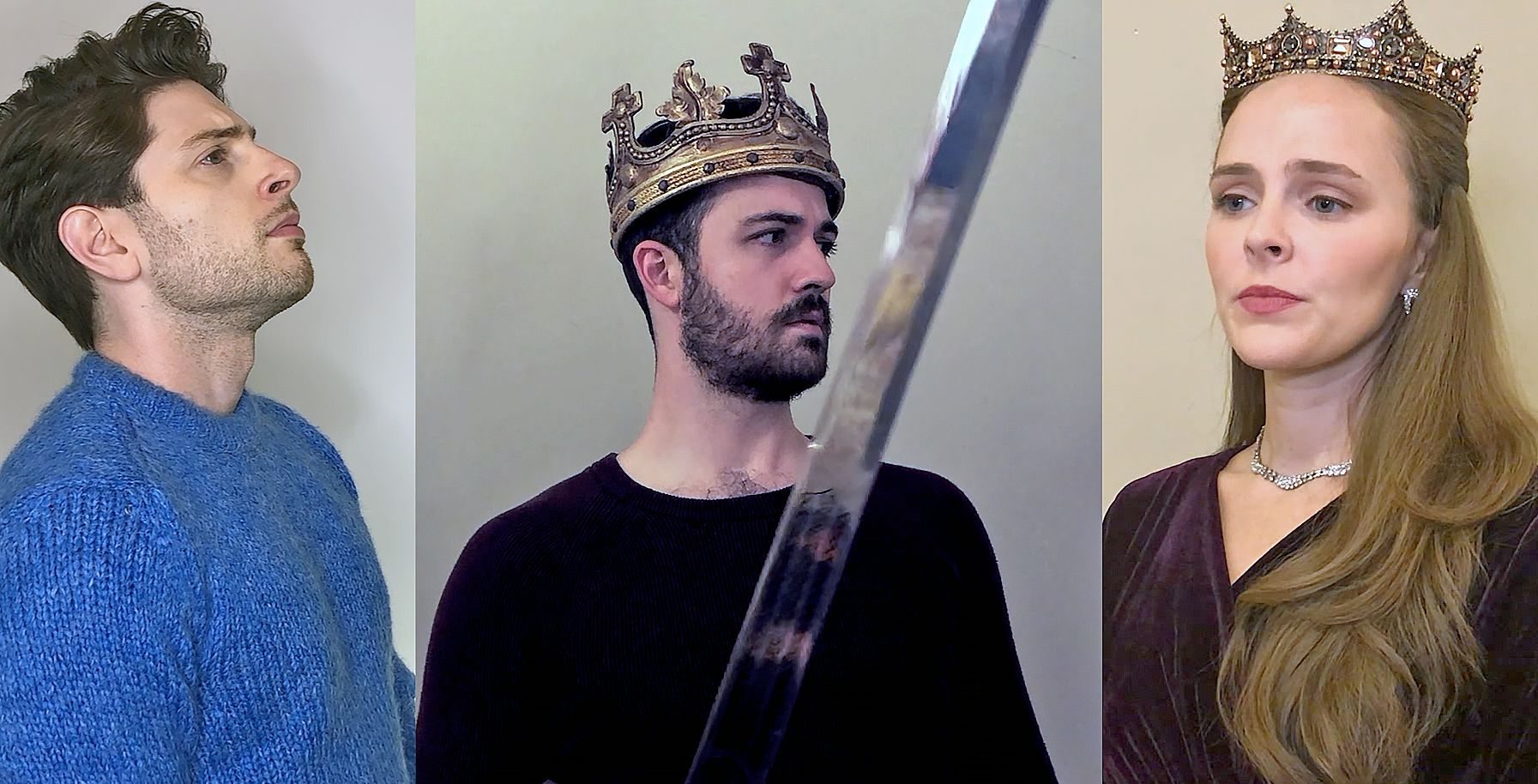 In our pandemic-altered world, “normal” life remains both a memory and a longed-for dream.

Going to a grand theater, being surrounded by hundreds of people taking in a classic musical? That’s one among many things we can’t safely do just yet. So we adapt, with artists creating digital content, and smaller audiences watching from the safety of their couches.

When the pandemic shutdown hit in March, Actors’ Playhouse artistic director David Arisco and his cast were already in technical rehearsals for their production of Alan Jay Lerner and Frederick Loewe’s beloved “Camelot.” In an instant, that “Camelot” vanished just like another of Lerner and Loewe’s musically mythologized places, “Brigadoon.”

The halted production at the Actors’ Playhouse at The Miracle Theater in Coral Gables was a more compact version of the 1960 original, with Lerner’s book (itself based on T.H. White’s “The Once and Future King”) adapted by David Lee; new orchestrations by Steve Orich; a slightly smaller, 11-member cast; and about an hour lopped off the show’s 3 ½-hour running time.

Soon enough, though, Arisco had a vision of how a streamed, song-driven version of “Camelot” could work. Working with the permission of Music Theatre International (MTI), Arisco further adapted the musical that became a cultural touchstone during President John F. Kennedy’s administration.

Propelled by 13 beautifully sung numbers, this “Camelot” keeps its focus on the musical’s tragic love triangle –  between idealistic King Arthur; his radiant queen, Guenevere; and his sublimely confident, dearest friend, Lancelot – and the way Arthur’s illegitimate son, Mordred, schemes to crush his kingdom.

Available through Oct. 25 on MTI’s streaming platform, ShowTix4U (accessible via the Actors’ Playhouse website), this version of the show has been abridged, adapted and directed by Arisco, with sound mixing and video editing by Shaun Mitchell, and musical direction/accompaniment by David Nagy. It stars the same actors who were just about to open the show at the Miracle Theatre in March: Britt Michael Gordon as King Arthur, Kayleen Seidl as Guenevere, Nick Fitzer as Lancelot, Sean Patrick Doyle as Mordred. Orlando Rodriguez appears briefly at the end as young Tom of Warwick, the boy charged by Arthur with sharing the story of the noble experiment that was Camelot.

Clocking in at a lean 80 minutes, this digital “Camelot” comes across as a first foray into a new way of working. 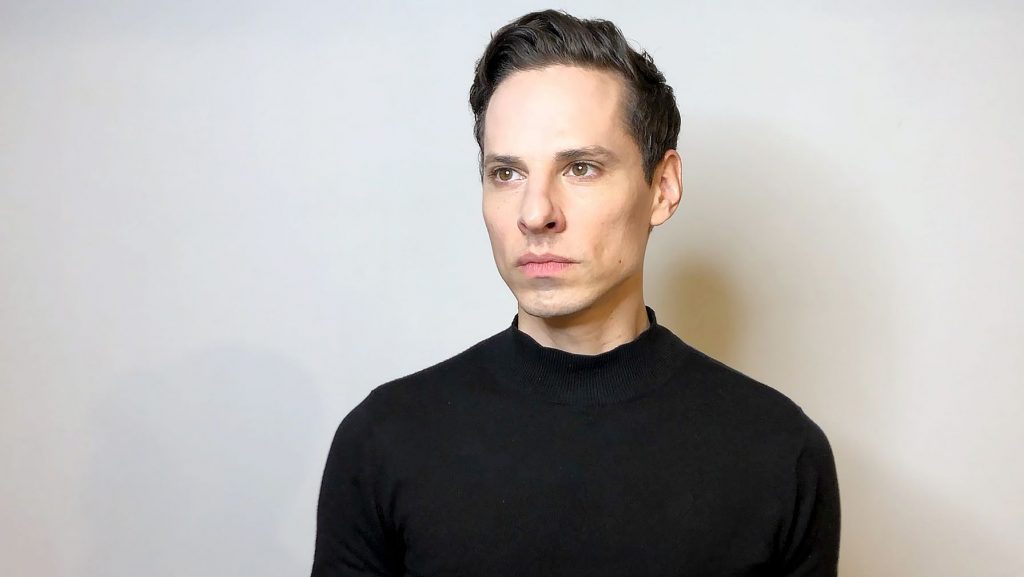 Sean Patrick Doyle is the scheming Mordred in the streaming “Camelot.” (Photo courtesy of Actors’ Playhouse)

Arisco appears on camera to greet the audience, much as he would in a pre-curtain speech at The Miracle, offering tidbits about the adaptation. Then, with storytelling narration serving as a bridge between songs, “Camelot” unfolds.

Dressed in simple contemporary clothing and wearing an earbud, each actor worked solo against a plain neutral background. Although they’re sometimes seen singing together, they were never in the same room, and shots of Arthur using his Excalibur sword to knight Lancelot and young Tom involve editing trickery. Likewise, in scenes featuring two or three characters, the actors’ images pop up side by side.

Acting in this way involves a degree of difficulty. Nearly every shot is a closeup, so style and facial expressions land differently than they would on a stage in a large theater.

When Fitzer’s Lancelot first appears on camera, he’s so close that you can see his ring light reflected in the irises of his eyes. Some of Seidl’s reaction shots as Guenevere feature her broad, beautiful smile in moments that would seem to call for a little anguish.

Gordon exudes both warmth and deep sorrow as Arthur, though a streak on his wall and a briefly visible electrical outlet fleetingly pull focus. Miami native Doyle, who made his professional debut at age 10 at Actors’ Playhouse, is an actor with cut-glass cheekbones, Broadway credits and loads of TV experience. He knows how to work a camera, baby, and his Mordred is the most evil creature since Cruella de Vil.

Although Nagy’s keyboard accompaniment obviously can’t match even a small orchestra, the vocal performances are the most compelling reason to sample this “Camelot.”

Gordon properly radiates pre-wedding jitters as he sings, “I Wonder What the King Is Doing Tonight,” turns tender on “How To Handle a Woman,” and makes you feel the pull of Arthur’s vision as he sings the title song.

Seidl’s glorious, crystalline soprano voice can be both playful (“The Simple Joys of Maidenhood,” “The Lusty Month of May,” “What Do the Simple Folk Do?”) and pensive (“Before I Gaze at You Again,” “I Loved You Once in Silence”). Fitzer has fun with the narcissistic “C’est Moi,” then slays (as he should) with an aching “If Ever I Would Leave You,” and Doyle delivers Mordred’s nihilistic ditty, “The Seven Deadly Virtues,” with arch pleasure.

At the start of the 1960s, “Camelot” was a show-as-symbol, a metaphor for the most idealistic of a president’s dreams. This time around, the compact “Camelot,” though full of stirring music, is a placeholder for the day when artists and theater lovers can return to live performances.

WHAT: “Camelot” by Alan Jay Lerner and Frederick Loewe, adapted by David Arisco

COST: $30 (subscribers and ticketholders for the canceled live performance get free access)