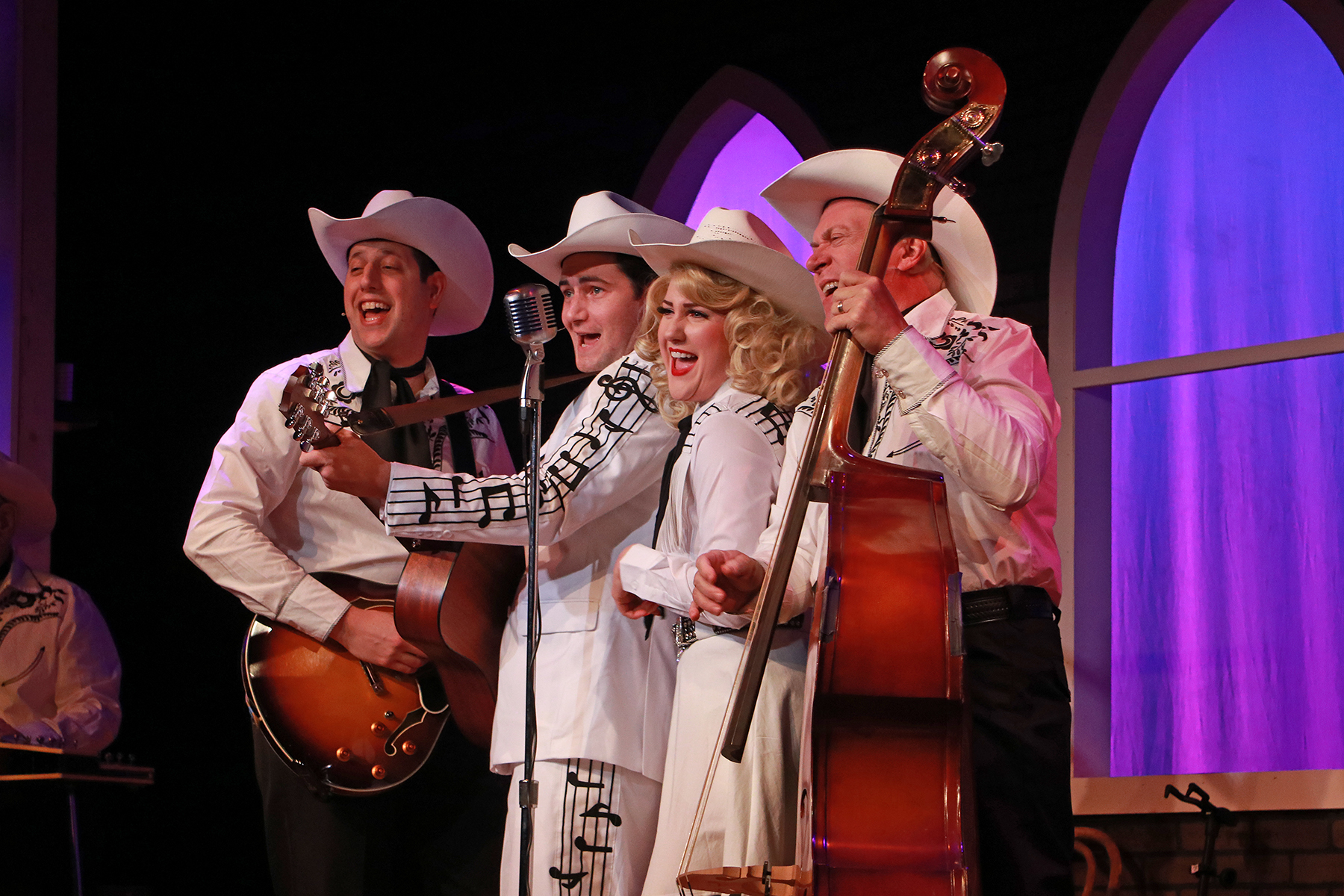 In 1987, singer-songwriter Hank Williams was given a posthumous Grammy Lifetime Achievement Award.

The honor, bestowed to a country music icon whose body of work included “I Can’t Help It (If I’m Still in Love with You),” “I’m So Lonesome I Could Cry,” “Hey Good Lookin’,” “Your Cheatin’ Heart” and countless Billboard Country and Western chart toppers, was richly deserved.

But Williams’ lifetime? That was tragically brief. From hardscrabble beginnings in Alabama to his lonely death on the way to a concert in West Virginia, he never made it to his 30th birthday. Yet he packed so much living, self-destruction and success into those years that he had enough material for dozens of unforgettable hits. 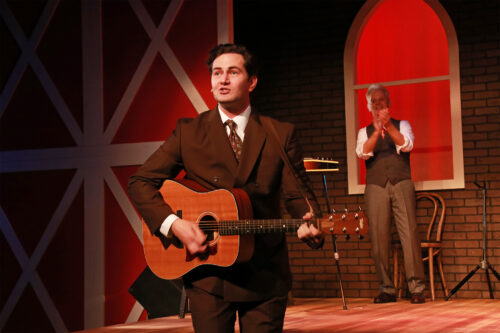 Whether or not you know much about Williams’ songs and the man who wrote them, you’ll encounter a fascinating, complex, charismatic version of a gone-too-soon artist if you catch the new Actors’ Playhouse production of “Hank Williams: Lost Highway.”  The Randal Myler-Mark Harelik show, which premiered at the Denver Center the same year Williams got the Lifetime Achievement Grammy, went on to play other major regional theaters, which included Nashville’s Ryman Auditorium and a 2002-2003 off-Broadway run, among its many productions.

Actors’ Playhouse artistic director David Arisco is justifiably proud of his company’s version of
“Hank Williams: Lost Highway,” which is running in the upstairs Balcony Theatre space at Coral Gables’ Miracle Theatre through the end of the month.  Performed by a cast of 10 actor-singer-musicians – some of them South Florida-based talent, others from places near and far – the performers deliver at the level Williams’ music deserves.  Listening to them sing and play is moving, entertaining, and many times thrilling.

The Myler-Harelik script hits the highs and cautionary lows of Williams’ short life, which could be a template for many a subsequent star lost to disorienting fame and substance abuse.  Williams’ severe back pain (he was born with spina bifida occulta) and bad heart, coupled with alcoholism and drug abuse (amphetamines, Seconal, morphine, and the addictive sleep drug chloral hydrate) did him in. 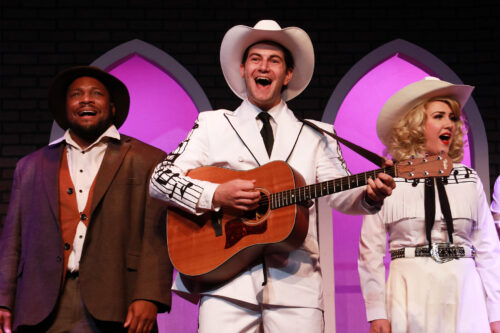 The show begins with the shocking news of the star’s death in the back seat of his baby-blue Cadillac convertible on New Year’s Day 1953.  Then it scrolls back to his beginnings as he learns blues-infused phrasing and guitar playing from street singer Rufus “Tee-Tot” Payne, here played by the magnificent Chaz Rose (from the Actors’ production of “Memphis”).

Any bio-musical requires a chameleonic actor-singer in the title role, and Arisco found an ideal Hank in Andy Christopher.  Christopher has played Williams and rock ‘n’ roll original Buddy Holly in different productions, so he’s obviously successful at tailoring his voice and in-the-spotlight charisma in transformative ways.

He’s a sensational Williams: tall, more handsome than the original, deft at inserting a well-placed yodel at the right moment in some of the lyrics.  He charms, yes, but doesn’t stint on the ugliness when Williams’ life is disintegrating.  Christopher’s rendition of “I’m So Lonesome I Could Cry” is haunting and heartbreaking, sad and beautiful at the same time. 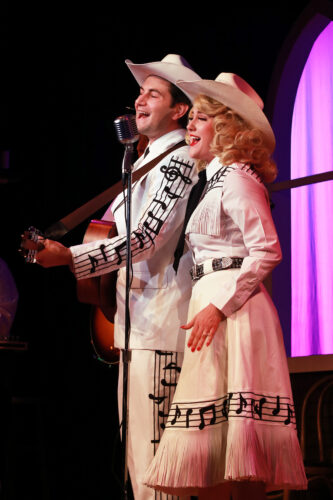 As music publisher Fred “Pap” Rose,” Barry Tarallo also narrates and frequently butts heads with Christopher’s stubborn Williams.  He’s good, very good as yet another victim of Williams’ increasingly erratic behavior, but it’s a shame that the character sings only with the group at the beginning and end of the show – his tenor voice is a thing of beauty.

Elizabeth Dimon plays Mama Lilly, Williams’ driven, church-going mother who served as his first manager.  She’s a no-nonsense gal who doesn’t have much more luck controlling her alcohol-abusing son than anyone else will, and though we get a taste of Dimon’s terrific voice before another woman supplants Mama in Williams’ life, it’s not enough.

The “other” woman is Lindsey Corey as Williams’ first wife (and second manager) Audrey.  Attractive, ambitious and aggressive, she is determined to follow her hubby into country music stardom. Trouble is, she has no discernible talent – a problem Corey herself does NOT have.  The actor is a glorious singer – just listen to her during the “I Saw the Light” finale – so playing off-key Audrey can’t be easy.  Myler and Harelik have written the role as a caricature of the pushy wife, but Corey makes the comedic most of it.

Sofia Porcel plays a character known only as Waitress, a woman who works in a truck-stop diner while she smokes and obsessively listens to Williams on the radio.  She’s representative of his legion of fans and one-night stands – as we see, finally, when the two end up in a cow pasture – but keeping her onstage through most of the show is distracting; ditto with having Rose’s Tee-Tot parked on the porch of a country gas station. 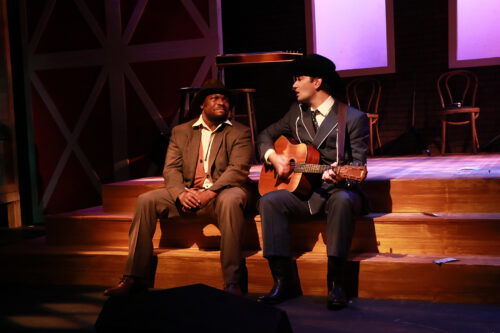 It’s impossible to guess whether the Actors’ Playhouse design team contains any hardcore country music fans, but all seem to have been inspired by Williams, his music and his story.

Ellis Tillman, whose work is always excellent, has outdone himself in creating a huge array of period- and genre-perfect costumes, particularly his versions of the famous Nudie-brand suits Williams favored. Those suits cost $500 back in the early ‘50s; in today’s dollars, that translates to more than $5,000 apiece.

Just one more note:  If you try to see “Hank Williams: Lost Highway” after July 31, you won’t. That’s the closing date, and because Actors’ has another show waiting in the wings, there won’t be an extension.  So, get a move on or you’ll be left, like Williams, singing the “Long Gone Lonesome Blues.”

WHERE: Actors’ Playhouse in the Balcony Theatre at the Miracle Theatre, 280 Miracle Mile, Coral Gables

TICKETS: $40 to $90 (seniors 65 and over get 10 percent off weekdays only; students 25 and under with valid student ID pay $15 for a rush ticket available 15 minutes before a weekday performance. Special Lunch Break deal offers half-price tickets between noon and 2 p.m. to same-day weeknight performances; Tix @ 6 offers half-price tickets weeknights between 6 and 6:30 p.m., with both requiring an in-person purchase at the box office, subject to availability)