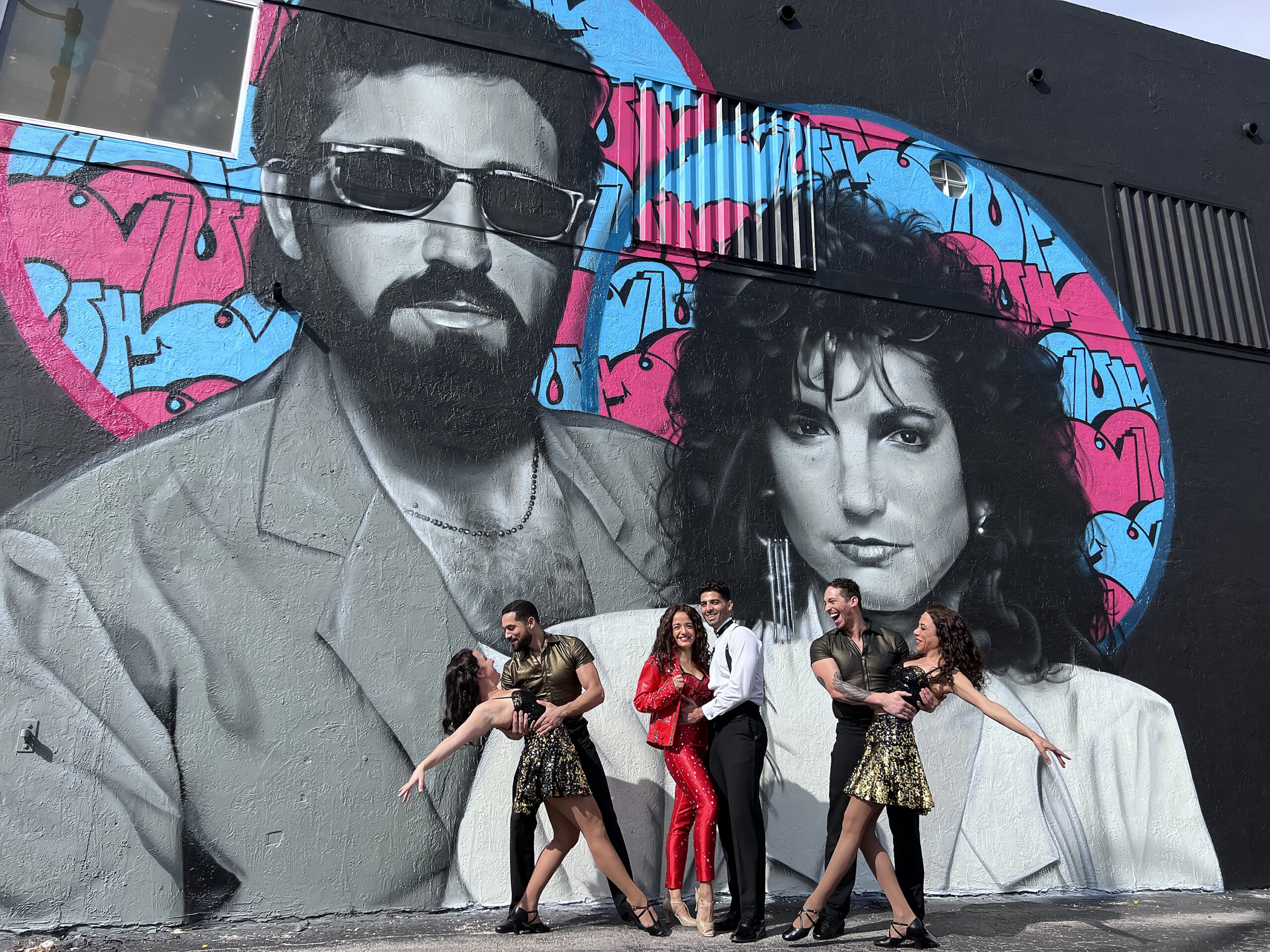 Theirs is a 305 love story, one involving leaving behind a beloved homeland, forging a new life and achieving success on a scale beyond their grandest dreams.

That lived-in-Miami, made-for-Miami saga is about to be celebrated again in their Broadway bio musical, a show getting its first big regional production here thanks to Actors’ Playhouse at the Miracle Theatre in Coral Gables.

And while it’s true that most couples will never see their personal histories play out on a stage, most couples aren’t Grammy Award-winning, much-celebrated music superstars Gloria and Emilio Estefan.

“On Your Feet!,” the more-than-a-jukebox musical that played Broadway’s Marquis Theatre from 2015 to 2017 (to get specific, that’s 34 previews and 746 regular performances), was supposed to open at the Miracle in November 2020. The COVID-19 pandemic shredded that plan.

Rehearsals for the rescheduled production were to have started Jan. 4, 2022, but after the Omicron variant surged, the show got pushed back a couple of weeks. Now, “On Your Feet!” will preview Feb. 9-10 and open Feb. 11 for a run through March 9. 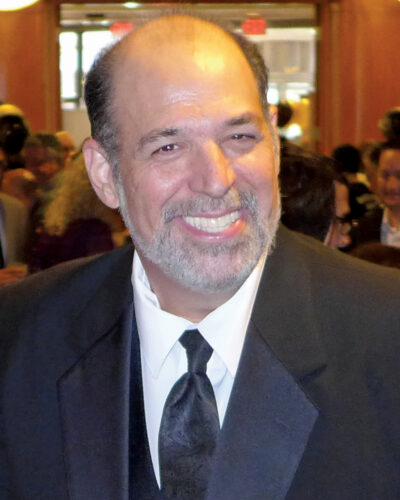 “This is a huge, ridiculously complicated show,” says artistic director David Arisco, who is overseeing the production along with executive producing director Barbara Stein.

“We have 21 adult actors, two kids, two swing performers, a crew of about a dozen and 10 musicians – six of them from the Miami Sound Machine. We had to add wig specialists; rent a lighting package, a projection package, costumes and furniture; bring in a new sound board….Our usual production costs might be $450,000 for a big musical – this one, including marketing and all the people working in the building, is $750,000 and climbing.”

Beyond that monetary investment in a first-rate “On Your Feet!,” which has a book by Oscar winner Alexander Dinelaris (a former Barry University student) and music credited to the Estefans and the Miami Sound Machine, the choice of the show’s creative team and cast reflects the company’s deep commitment to honoring an iconic Cuban-American Miami story. 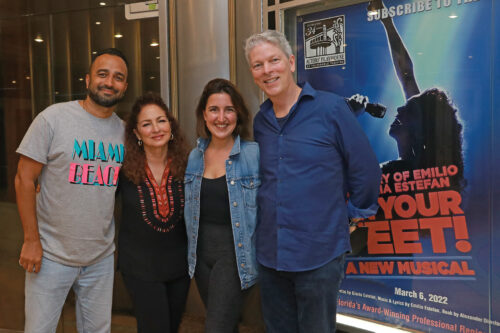 Clay Ostwald, the show’s musical director, is a University of Miami grad, original member of the Miami Sound Machine and a composer, lyricist, arranger and producer credited on many of the group’s hits starting in 1986. The musical’s title song (“Get On Your Feet,” written with the late Sound Machine bass player Jorge Casas, John DeFaria and Gloria Estefan), “Oye Mi Canto” and “Party Time” are all numbers Ostwald had a major role in crafting. Though he moved to New York when “On Your Feet!” went to Broadway, he has come home to be part of the Actors’ Playhouse production.

“I haven’t said no to Gloria and Emilio very often in the 36 years we’ve worked together. I admire them so much,” Ostwald says. “I’m amazed at the power of the theatrical art form. This was a way of getting people into this story, and not just Latino people who have had to stand up, struggle and overcome obstacles.”

Ostwald points out an unusual-for-theater challenge in the way the show’s music is performed.

“The music is crafted around pop conventions but also spontaneity, and it has jazz elements. It can’t be etched in concrete every night,” he says. “The actors have to do it word-for-word, but I’m talking about the actual playing. It’s fluid and creative. I’ve played these songs a million times. I know the ins and outs of every moment. And I get excited every time.” 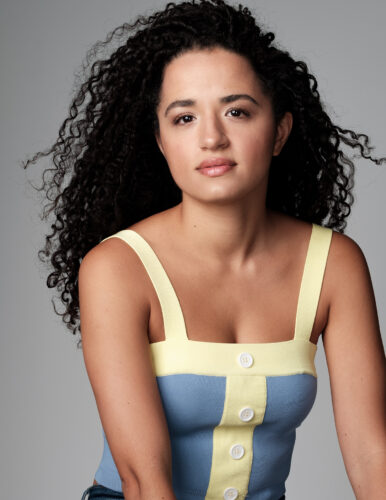 Starring in the production are former Miamian Claudia Yanez and Hialeah-raised Jason Canela. Yanez played the superstar’s sister Rebecca and often stepped into the leading role on the national tour. Canela, a Los Angeles-based film and television actor, is the first Cuban American to portray music mogul Emilio Estefan in the show.

Also part of the cast, a mix of South Florida talent and performers based elsewhere, are Alma Cuervo, University of Miami grad Henry Gainza, Alejandra Matos and Hector Maisonet, all of whom appeared in the show on Broadway, on tour or both.

“My dad was the neighbor of Gloria’s mom and dad in Havana. When Gloria’s mom went into labor with her, my dad drove her to the hospital,” says Señor, a Florida International University grad who now lives in Barcelona. “My dad got into the music business in Miami and played parties with the Miami Sound Machine….Gloria called my dad ‘padrino’ [godfather]. They were a huge influence on me. Their success and Jon Secada’s success rewired my brain.”

As a kid, Señor took a fateful field trip to the original Actors’ Playhouse location in Kendall to see a production of the musical “Godspell.” That show gave him a preview of his future.

“It changed my life,” he says simply, acknowledging his happiness at working with Arisco and Stein, while noting their decades of hard work that made a difference in so many South Florida performers’ careers.

Señor, who played the luminous and tragic Angel Schunard in the long-running Broadway production of “Rent,” calls choreographer Caruncho the “MVP” in “On Your Feet!” at the Miracle.

“My understanding of the material has deepened profoundly since we did it on Broadway. But no one knows how it lives onstage like Natalie does. Without her, I can’t do it the way it should be done,” he says. 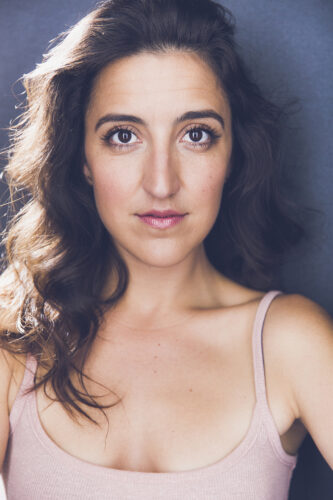 Caruncho made her Broadway debut in “On Your Feet!,” serving as dance captain and a swing performer who covered eight different ensemble roles – a challenge, yes, but a wonderful one.

“You learn all these parts, and you have to be the most flexible, focused, strong and malleable people in the building. I felt very useful,” she recalls, noting that she did eventually go on in all eight roles. “It’s just different from being focused on one track in a show and knowing that to perfection. It’s like being in ‘The Matrix.’”

The dance in the show is based on “authentic Cuban salsa,” Caruncho says, as well as pop concert performances from the 1980s and ‘90s. And after the first rehearsal, she knew the Actors’ Playhouse cast was ready for it.

“This is the most Miami, the most Cuban cast we’ve ever had. It almost feels like another first, the way we’re bringing it home. It sounds like us. Each person feels, ‘This is my family. These are my friends,’” she says. “This show has connected me more to my sense of being Cuban American. Living it on a stage fills me with a sense of pride…It’s such a joyful show, with conga, sequins and sparkles, but it’s also deep.”

Dinelaris’s script serves up plenty of the Estefans’ joy and success, but it also doesn’t downplay the tougher moments in their lives.

He includes the opposition that Gloria Fajardo, the singer’s mother, had to her future son-in-law, to her daughter getting into the music business and to the couple taking her younger daughter Rebecca on the road with them; the death of Gloria Estefan’s father José Fajardo, a Bay of Pigs and Vietnam veteran, from multiple sclerosis; the serious 1990 tour bus crash that fractured the singer’s spine, even as it led to a reconciliation and deeper relationship between the couple and Fajardo.

Certainly, the drama, singing and dancing have given Yanez and Canela a lot to work with as they approach opening night.

“I feel like I’ve been preparing for this my whole life without even knowing it. When I was eight, I took voice lessons from Gina Maretta, who was Gloria’s voice teacher,” says Yanez. “Most of the research I did was to watch video of Gloria’s concerts, listen to her recordings, watch how she takes up space.”

Yanez, who got her musical theater training in Boston, calls performing “On Your Feet!” a “magical” experience that almost feels like going to church, especially in Miami.

“Gloria and Emilio are such a part of the DNA of this city,” she observes. “I’m trying to stay true to how she’d phrase a sound. She’s such a beautiful performer, such a song writer through and through. It’s all about the lyrics for her.” 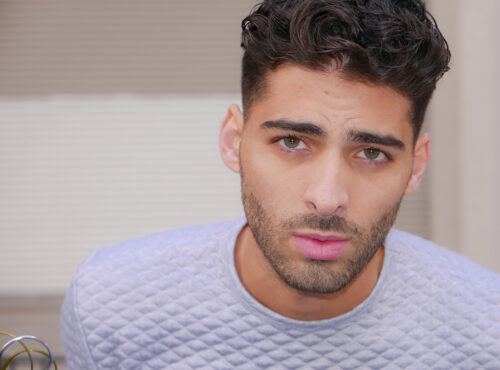 Canela, the younger brother of actor and musician Jencarlos Canela, studied acting at the New York’s Lee Strasberg Theatre & Film Institute. He’s been busy amassing credits in English- and Spanish-language television and film, but “On Your Feet!” marks his professional theater debut. To say he has fallen in love with the art form is an understatement.

“The first few days, I was just in awe. Everyone is so good,” he says. “They bring so much emotion, so much precision into every dance, every word spoken and sung…It really does feel like a religious experience. When I leave the theater, I count the minutes until I get to go back into that space.”

The actor jokes that the first four performances will be sold out because of his extended Miami family members who are planning to see the show. As a first generation Cuban American, he remembers how he felt when he first read the script.

“I saw myself. I saw myself, my mother, my father, my brother, my cousins. It felt like home,” Canela says. “I did all the research about who Gloria and Emilio are, what they’ve done, what they’re doing. But I felt like they were my aunt and uncle, even though I met them later in life. They’re a part of any Cuban kid who grew up here and anyone who knows Latin music.”

Señor and Caruncho second that sentiment and underscore the inspirational power of “On Your Feet!.”

“Gloria and Emilio’s music is an essential soundtrack to the history of Miami,” says Señor.

Adds Caruncho: “This is a high-level love story about music, the Cuban-American experience and following your dreams. It’s also about Gloria and Emilio’s tenacity and grit, their unshakeable belief that you take one step, then another. You keep pushing. You keep showing up.”

“On Your Feet!” is at Actors’ Playhouse at the Miracle Theatre, 280 Miracle Mile, Coral Gables, through March 6; previews 8 p.m. Feb. 9-10, opens 8 p.m. Feb. 11; regular performances 8 p.m. Wednesday-Friday, 2 and 8 p.m. Saturday, 3 p.m. Sunday; tickets cost $55 to $85 (seniors 65 and over get 10 percent off weekdays only, students 25 and under with valid student ID pay $15 for a rush ticket available 15 minutes before a weekday performance); proof of vaccination or a recent negative COVID-19 test or COVID-19 Antigen test required; masks required except when eating or drinking in designated areas; 305-444-9293 or www.actorsplayhouse.org.

To read Christine Dolen’s review for this show, click here.