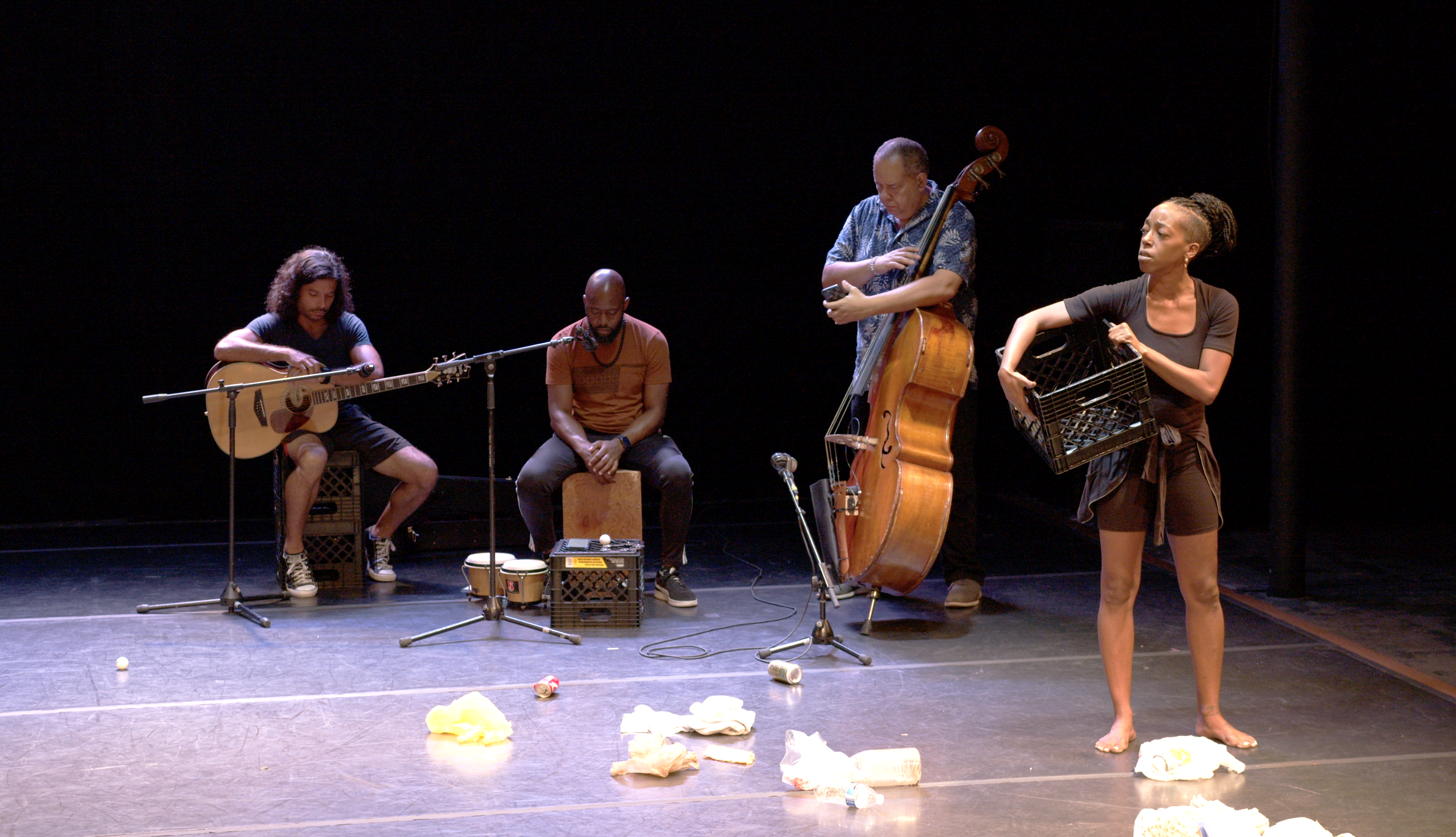 “In the Brackish Water,” a theatrical praise song to Miami by Alejandro Rodriguez, features Vanya Allen, Ranses Colon on bass, Donell McCant on percussion, and Richard Padron on guitar,  as part of “Here and Now: 2022.”  (Photo courtesy of Kevin Alvarez Cordova)

Alejandro Rodriguez remembers being a theater kid in Miami. He vividly recalls his mother trying her darndest to support his interest in arts.

“She drove me to Coconut Grove Playhouse and inside its smaller Encore Room, there was a solo show going on,” Rodriguez says.

It was 2002 and Teo Castellanos was performing in his original “NE 2nd Avenue.” It was Beth Boone, artistic and executive director of Miami Light Project, who had first commissioned the piece as MLP’s inagural full-length work from a Miami artist.

Rodriguez decided he wanted to be an actor and left for New York to attend The Juilliard School. He worked in theater, on television, and doing other performing arts jobs, but in 2020, after 15 years, he returned to Miami.

“The first outing I did when it felt safe enough to go out after COVID-19 was the 2021 ‘Here & Now’ showings. Beth was there as she so often is.” He had never forgotten that “NE 2nd Avenue,” which had such a profound effect on him, was incubated at Miami Light Project. That night, he told Boone how he had been thinking he might like to try something. “I was so jazzed by what I saw at ‘Here & Now,’ I went home and started my application.”

In addition to Rodriguez’s work, “In the Brackish Water,” other commissions include Jenna Balfe’s “Organesis,” Cecilia Benitez and Stephanie Perez in “Manteca,” Symone Titania Major’s “Home” and Randolph Ward’s “Unconventional.” 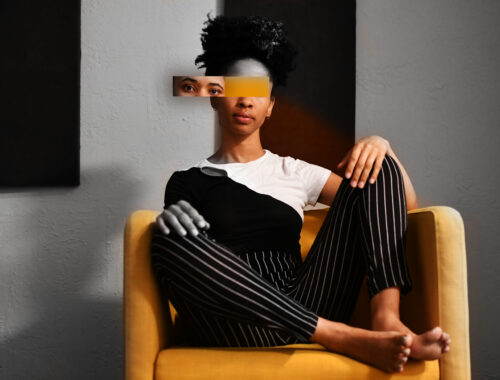 Symone Titania Major’s “Home” is an expressional journey of poetry, performance and photography. (Photo courtesy of the artist)

Miami Light Project launched “Here & Now” in 1999, a year after Boone came on board. In addition to a commission fee of $5,000 for South Florida-based performing and multi-media artists selected from submitted applications, the artists receive rehearsal space, technical assistance, and professional development. Boone says “Here & Now” artists have access to everything Miami Light Project has to offer in “perpetuity.”

“This is truly my favorite program initiative that we have at Miami Light Project because I believe it is our most important work — investing in the artists who make Miami home. I am so moved by the creativity and the generosity of all the artists when they come to this blank slate,” she says. Since its inception, Miami Light Project has commissioned work from more than 100 South Florida-based creatives. Artists are in residence for a year developing their commissions. “Here and Now” is the culmination of that work.

For Ward, the “Here and Now” opportunity gave him time to dig into “Unconventional,” which is constructed in four acts and explores notions of identity through the work of a drag queen, pole dancer, female boxer, and a Black transgender Vogue dance artist. “These are all people who have all made their money in very unconventional ways.” 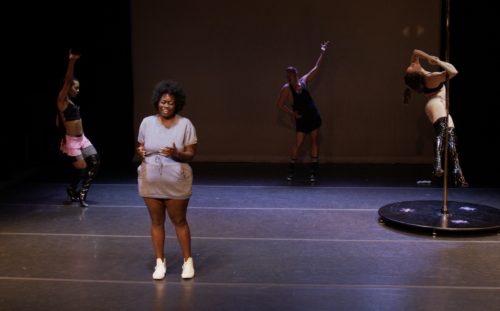 While he’s not new to staging original productions, Ward says for him, “Here and Now” was all about having the space and time for development. And, there was another concrete plus. “I was actually in the theater using the theater space where we’d be performing. I didn’t have to rent a studio space. ‘Here and Now’ is just a great platform.”

Rodriguez says that having a place that is all about the creative process has made an impact. “As an artist who is still very much in the learning and growing phase, you just desperately need a place to try stuff. To make bad choices, go too far,  mix art forms that maybe haven’t gone together before. To put it bluntly, you need to be able to fail as an artist before you can break any new ground. This is a place with a safety net,” he says.

His work, “In the Brackish Water,” combines spoken word, live music, and movement in a theatrical monument to Miami’s precarious future. “There’s a priestess character backed by a trio of musicians who has gathered us all for a ceremony to show us something that we ought to see as people who call this city home.”

The other pieces in “Here and Now: 2022” are “Organesis,” a performative narrative that explores human value and fulfillment in a time of overstimulation, overpopulation, and perceived emotional scarcity. “It is a mash up of music, dance, and theater. You can’t pin it to a discipline because Jenna (Balfe) has got all of it. It’s smart and very funny,” Boone says.

“Manteca“ is a dance tribute to the game of dominoes— with a feminist twist. Boone says the three-part piece by Cecilia Benitez and Stephanie Perez is about identity and is “beautifully expressed in dance and choreography.” 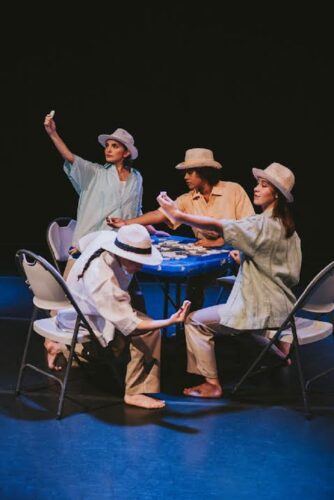 In “Manteca,” Cecilia Benitez, Stephanie Perez, Scarlett G. Quinto, and Maytte Subirana-Albarellos, play the game through dance in an homage to Cuban culture and tradition. (Photo courtesy of Maya Billig)

“Home” is described as an expressional journey of poetry, performance, and photography in an interactive work of art. “Symone (Titania Major) is just joyful to watch. ‘Home’ is told in such a personal way on issues that we are all grappling with every single day in our world. It’s just exquisitely realized,” Boone says.

For those like Rodriguez who become immediately inspired after “Here and Now: 2022,” Boone says to be on the lookout. “We try to make the applications (for next year) available right on the heels of the ‘Here and Now’ performance program because artists in the community are all jazzed up and saying, ‘How can I do this?’ ”