A Prelude to Halloween: Dracula’ With a MeToo Twist 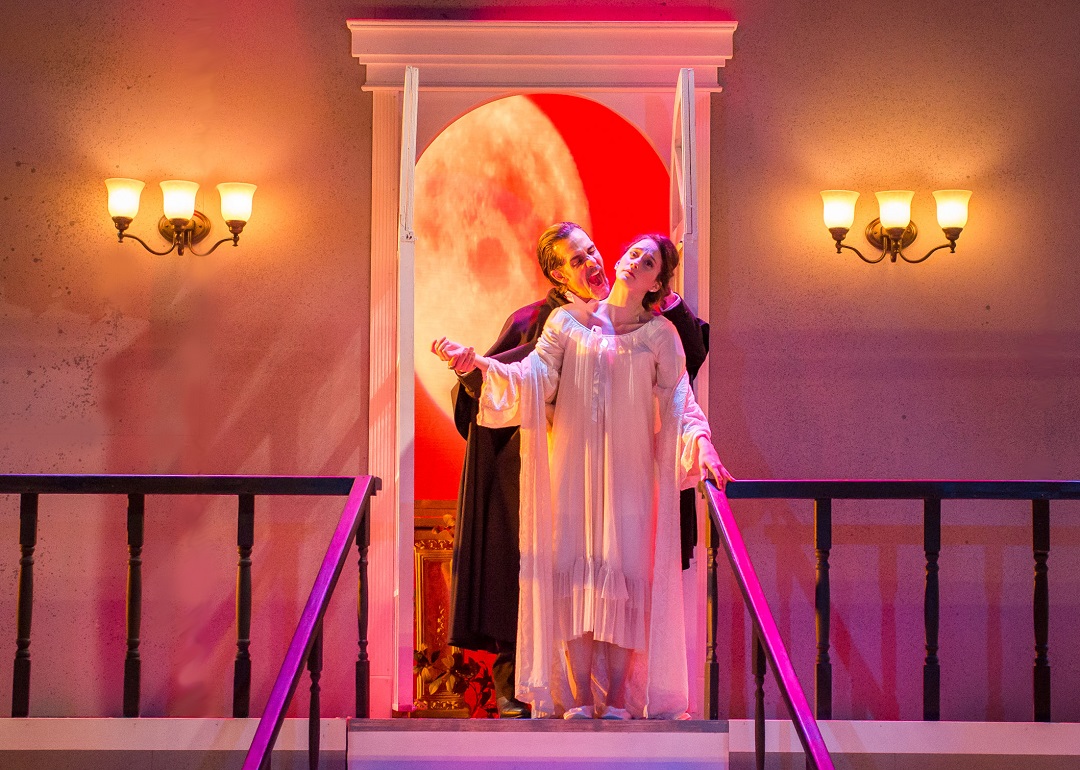 Dracula, that Transylvanian count with the insatiable thirst for fresh blood, has given many an actor the chance to sink his teeth into one of the great roles in gothic horror.

In the movies, Bela Lugosi and Christopher Lee were the performers who most famously donned the count’s cape and fangs. Max Schreck, Klaus Kinski, Gary Oldman and Frank Langella are among others who tried them on for size.

Zoetic’s season opener, brought to life by artistic director Stuart Meltzer and running in the Carnival Studio Theater at Miami’s Arsht Center until a few days before Halloween, is a period piece grounded in the familiar vampire tale first told by Irish novelist Bram Stoker in 1897.

McKeever’s #MeToo-inspired twist is to empower Mina Murray, a plucky woman Dracula wants for his undead queen, and to replace Dutch professor/vampire hunter Abraham Van Helsing with E.W. Van Helsing, who turns out to be the late scholar’s Johannesburg-born daughter.

The award-winning McKeever, a prolific and shape-shifting South Florida playwright whose success with his recent contemporary works “Daniel’s Husband” (opening Oct. 18 at Off-Broadway’s Westside Theatre), “After” and “Mr. Parker” has underscored his growing national reputation, is jumping into a wholly different genre with “Dracula.”

The landing is impressive – though, as is often the case with first productions, certain facets could be revised or strengthened.

Blending horror, skillful dashes of leavening comedy and atmospheric drama, this new version of an oft-told tale at first seems exposition-heavy.  But once Orizondo’s Dracula comes calling – through elevated upstage French doors that dramatically blow open to accommodate his arrival – the show gets a transfusion of simmering menace.

Though the count has had his eye (and eyeteeth) on the increasingly pale Lucy (Isabella Lopez), the beautiful ward of sanatorium operator Dr. Edmond Seward (David Kwait), he is instantly drawn to her old friend Mina (Lindsey Corey).  Mina and her solicitor fiancé Jonathan Harker (Daniel Capote) have traveled from London to the seaside town of Whitby at the behest of Seward, who is worried about Lucy’s increasing need for transfusions.

An atmosphere of fear is also fueled by Renfield (Caleb Scott), Harker’s former associate, who traveled to Transylvania to broker property purchases in Whitby and London for the count – and who lost his mind in the process. Now Seward’s patient, Renfield is given to intoning mysterious statements and prophesies. His diet of choice includes spiders, other insects and rats. And he gets very nervous whenever Dracula comes around.

Then, once a Steampunk Van Helsing arrives, it’s vampire-hunting game on, despite the misogynistic Seward’s utter astonishment that the renowned white male scientist he was expecting is actually a woman of color.

McKeever’s “Dracula” features the requisite crosses, stakes through the heart, Wolfsbane and extravagantly bloody encounters.  Dracula preys on or kills those around him – the playwright sees him as “the ultimate predator” – and in an act of sadistic narcissism to establish control over Mina, he strips off his shirt, opens a wound on his chest and forces her to drink his blood. Shudder.

What makes this “Dracula” different is the way McKeever has Mina and the gender-reversed Van Helsing push back against the late 19th century patriarchy embodied by Seward and his Victorian brethren. That aspect gives this “Dracula” a contemporary resonance – my, how things have not changed – but the playwright could strengthen the script by not reiterating those points quite so much.

As for how the play is presented, McKeever has done double duty as the show’s set designer. He evokes an earlier theatrical era with a red velvet traveler curtain and clamshell footlights, then places the action in Seward’s multilevel seaside abode. The predominant color is gray – that is, until and whenever Dracula appears. Then lighting designer Rebecca Montero bathes the stage in vibrant color, particularly blood red.

Designer Marina Pareja is at her most creative with the women’s costumes (though the fit could use further adjustments), including those for violinist Francesca Rossi, whose haunting live music symbolizes Dracula’s presence or heralds his arrival. Sound designer Matt Corey supplies the howling “music” of the children of the night, cracks of thunder and other effects that ratchet up the play’s spookiness.

The crackerjack cast tears into McKeever’s script with the same fervor Dracula brings to transforming his unwitting blood donors.

The commanding Orizondo preens and charms and terrorizes, his lust for (draining) life always on display.  Stephens makes Van Helsing his formidable foe, a courageous woman with a crackling intellect and a wry smile.

Corey’s appealing Mina exemplifies the era’s “new woman,” her self-assurance growing throughout her journey from someone ready to embrace tradition to a woman excited to take on the world. Capote’s dashing Harker is her loyal, supportive betrothed, a good man flummoxed by the evolution of his beloved.

Kwiat is saddled with embodying the forces of misogyny as Seward – not to mention the character’s inappropriate yen for his exquisite ward – but he does so with grand style and panache. Lopez, a recent New World School of the Arts grad, gets to display her versatility as the victimized (and then horrifying) Lucy and as the chatty maid Bridgett.

Scott, a seasoned actor-playwright who made his South Florida debut opposite Corey in Zoetic’s enchanting “Dancing Lessons,” is an agitated, riveting presence as Renfield.  His finely calibrated performance communicates both the unfortunate soul manipulated by his master and the intelligent man still residing deep within.

McKeever’s new take on a horror classic, his 30th full-length play, doesn’t have the emotional power of his recent topical dramas. But as a period prelude to Halloween, it has plenty of entertaining bite.