A playwright responds to Donald Trump with “Building the Wall” 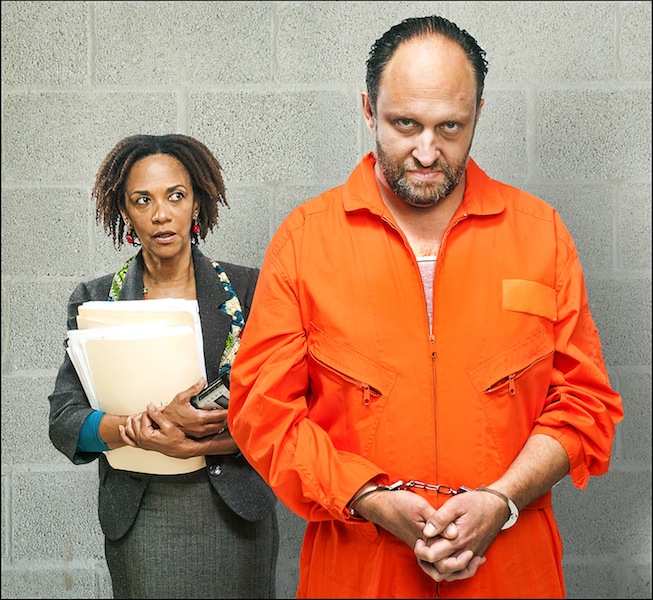 Even before the election that transformed billionaire reality TV star Donald J. Trump into the 45th president of the United States, playwright Robert Schenkkan was so disturbed by the candidate’s anti-immigrant rhetoric that he decided to respond.

Not with a Tweet. Not with an opinion-page essay. The Pulitzer Prize winner spoke back to candidate Trump with a full-length play.

“Building the Wall,” Schenkkan’s eerily prescient piece about life under a man he didn’t expect to win the election, has already been produced by a number of American theaters, with additional productions planned in the United States and several other countries.

Miami’s City Theatre, which has specialized in short plays and musicals during 21 years of presenting its popular Summer Shorts Festival, is going long-form with its own production of “Building the Wall,” just the second full-length in the company’s history.

Coproduced with the Adrienne Arsht Center for the Performing Arts, the play previews Saturday-Sunday and Sept. 28 before its official Sept. 29 opening in the Arsht’s Carnival Studio Theater. Schenkkan is expected to attend and participate in the post-show discussion after the Sept. 30 evening performance.

For the playwright, who won the 1992 Pulitzer for his six-hour epic drama “The Kentucky Cycle,” writing the 90-minute “Building the Wall” and sending it quickly out for production by multiple theaters was a different way of working.

“With a world premiere, I’m very involved, very precise about its trajectory,” says Schenkkan, whose works also include the play and screenplay “All the Way” (about President Lyndon Johnson and the civil rights movement) and coauthoring the screenplay of the Oscar-nominated “Hacksaw Ridge.” “I wanted to license this as widely as possible. I wanted it done everywhere.”

Writing his first draft in a week and continuing to tweak the script ever since, Schenkkan made his play inexpensive to produce – two characters on a single set – and utilized the National New Play Network’s “rolling world premiere” program to help get it out to multiple companies (City Theatre is an associate member of the network).

“There was an urgency. The response [to the anti-immigrant rhetoric] couldn’t wait…Theater has to become more adroit, more fleet-footed,” the playwright says, adding that he’s gratified by the way artistic directors “have responded with enthusiasm and changed their seasons to do the play.”

Set in 2019, “Building the Wall” centers on an encounter in a prison meeting room. Gloria, a black history professor, has come to interview Rick, a white man facing a death sentence. A terrorist attack in Times Square has led to the imposition of martial law, then to the rounding up of vast numbers of illegal immigrants placed into detention camps and private prisons to await deportation. Something unfathomable but not unprecedented has happened, a horror slowly revealed through Rick’s conversation with Gloria.

Schenkkan wrote the play before Trump’s election, before the president’s travel ban, before Charlottesville, before the threat to DACA dreamers. The playwright observes, “We’re all struggling to keep up with the pace of events.”

Staged by City’s artistic director Margaret M. Ledford, the Miami production features Carbonell Award winning actors Karen Stephens as Gloria and Gregg Weiner as Rick. Before they were cast, the actors read a short scene from the play at a City Theatre event attended by Schenkkan in February, when the campaign rhetoric was fresh and apprehension about the country’s future was surging.

Says Ledford, “When we read it, a lot of things hadn’t happened yet. It’s like Schenkkan wrote a manual…This needed to be seen, especially in multicultural Miami, and we’re supporting it with post-performance discussions.”

“You know that expression ‘that could never happen here’,” Stephens says. “That is so unrealistic. World War II was a slow buildup. It’s the same thing in this play. One thing after another. It’s like ‘The War of the Worlds.’ Those things were always there, festering, waiting for the right time to rear its ugly head. Civil rights had to be forced upon people. It makes you ask why. Why do you need to hold onto this hate?”

Weiner’s Rick embodies the mindset that helped get Trump elected.

In one speech, the character expresses Trump’s effect at rallies, after uttering things that no other candidate would say, this way:“…the crowd would get really lively. They would start shouting back at him. And that would work him up. And back and forth. It was like being part of a wave or something. A landslide. Big. Bigger than yourself. You didn’t feel little anymore, you didn’t feel put down anymore. Shamed. You didn’t feel shamed anymore.”

“It’s not every day you get to do activist theater,” Weiner says. “I pay attention to the other side of politics. I read everything. Because we’re so divided, it makes sense to listen to the other side until you can’t stomach it anymore…But that’s what I love about acting: trying to understand a point of view that isn’t mine. Trying to understand his ideology, where he came from…[Schenkkan] really captures the point of view of Rick and people like him.”

Talkbacks focused on immigration issues and tolerance are scheduled after the majority of performances, with participants including representatives from the Miami Conference of Christians and Jews, the American Civil Liberties Union, Americans for Immigrant Justice and the League of Women Voters, as well as a panel featuring immigration lawyer and former federal prosecutor Atara Eig.

“Audiences really want to talk about the play. They don’t want to leave,” he says.

The playwright also points out that the plot and the theme of “Building the Wall” are not one and the same.

“The plot mechanism speaks to an issue regarding illegal immigrants and private prisons,” he says. “But its thematic core is this: Between the individual citizen and the state, who decides what is morally right and wrong? The danger in a democracy is outsourcing morality to the government in moments of crisis and panic. That was my fear in October, and that’s my fear today.

“It requires a buy-in. The danger is that people feel it’s all so complicated and confusing that they assume the government knows what it’s doing. Citizens are yielding their basic responsibilities. That’s what keeps me up at night…My trust is in the inherent decency of the American people. Let’s hope we’ll get through this. But it’s not a given.”