A Miami playwright and ‘American Son’ go to Broadway 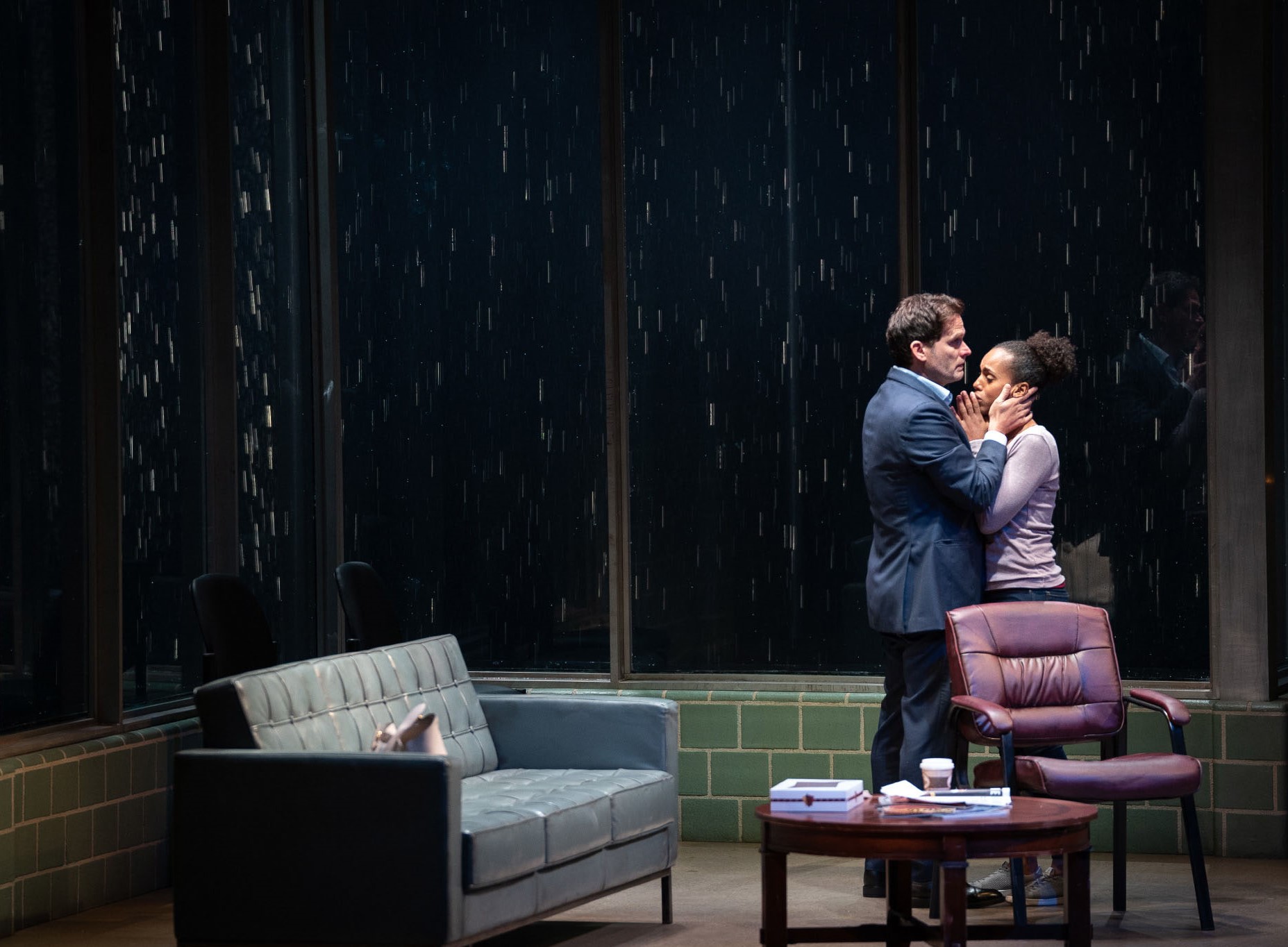 On Nov. 4, with his wife and law partner Stephanie and their two daughters by his side, the Miami writer and trial attorney was in the opening-night audience at Manhattan’s Booth Theatre as “Scandal” star Kerry Washington, Steven Pasquale, Jeremy Jordan and Eugene Lee brought his play “American Son” to life.

After that heady opening night, the playwright wrote this on Facebook: “I’ve officially been a Broadway playwright for about 10 hours now. Feels the same as before, except my hair is growing back… and I can dunk a basketball… and I met Ben Vereen, and my shirts don’t seem to wrinkle, and the climate is no longer changing.”

The reviews?  They were generally strong from critics, even stronger from theater lovers. On the web site show-score.com, 83 percent of 23 critics gave the play positive or mixed reviews.  The public went all in, with 95 percent of 148 site members giving “American Son” a positive review.

The important New York Times review, like many others, raved about Washington’s performance as a black mother frantic to find her missing 18-year-old son in the middle of the night. But critic Jesse Green also called the staging by Tony-winning director Kenny Leon his “best work to date: incisive and breakneck.”  And of the play itself, he wrote, “’American Son’ is not a subtle play; it barely feels like a play at all. With its unrelentingly high tension on every level – maternal, marital, societal – it’s more like a slice of a nightmare, with few contours despite its surprises. Its abrupt ending doesn’t even offer a chance for catharsis; it just spits you out.”

Demos-Brown has grabbed Broadway’s brass ring in a richer-than-usual season for plays on the Great White Way, which has long been dominated by lavish, tourist-magnet musicals.

Landing a first New York production on Broadway with a major star, famous producers and Leon at the helm – at the age of 54, no less – is way beyond the norm.  How did it happen?

The enormously successful Miami Pulitzer Prize winner Nilo Cruz, for example, has had one Broadway production, “Anna in the Tropics” in 2003-2004. Tarell Alvin McCraney, the Miami “Moonlight” Oscar winner, chair of the Yale School of Drama’s playwriting program and MacArthur “genius grant” winner, will get his first Broadway production this season when “Choir Boy” begins previews at the Samuel J. Friedman Theatre Dec. 12.

“One of the advantages to being one of the country’s oldest ‘emerging’ playwrights is that, had this happened to me 20 years ago, I would have been all giddy and jumped at the first available option,” says Demos-Brown, who founded Miami’s award-winning Zoetic Stage along with his wife, artistic director Stuart Meltzer, playwright Michael McKeever (whose award-winning “Daniel’s Husband” has just opened at Off-Broadway’s Westside Arts Theatre) and former managing director Kerry Shiller.

“There were four producers who were initially interested. I went to New York, sat down with them and asked them hard questions. [Lead producer] Jeffrey Richards was far and away the best option, and he told me it wouldn’t get done unless there was a big star in it. Then the process became about trying to get someone to read it. It took a year before the play got to Kerry Washington, and I was lucky that as soon as she read it, she loved it and wanted to do it and to coproduce it.”

The play that thrust Demos-Brown into the national spotlight is set in, and was developed in, Miami.  It was nurtured in the Playwright Development Program funded by Miami-Dade County’s Department of Cultural Affairs and had a series of South Florida readings before it had its world premiere at Barrington Stage Company in Pittsfield, Massachusetts, in the summer of 2016.  A second production was done at the George Street Playhouse in New Brunswick, New Jersey, in February 2017.

The searing 90-minute play that brought “Scandal” star Washington back to Broadway – she made her debut in David Mamet’s “Race” in 2009 – takes place in the wee hours of the morning in a Miami police station.

Kendra Ellis-Connor (Washington), a black psychology professor, and her estranged husband Scott (Pasquale), a white FBI agent, have been summoned there because of an “incident” involving their 18-year-old son Jamal.  The two press a young white officer, Paul Larkin (Jordan), for information without much success.

As they grow increasingly frantic, unable to reach Jamal, they dissect their love story and failing marriage, their at-odds parenting styles, the ways race causes them – and Jamal – to experience life differently.  When the seasoned black police lieutenant John Stokes (Lee) comes on duty, they get some harsh pushback – and, piece by piece, answers to their agonized questions.

South Florida audiences, who have experienced the premieres of such Demos-Brown plays as “Wrongful Death and Other Circus Acts,” “Stripped,” “Fear Up Harsh” (since retitled “American Hero”), “Captiva” and “When the Sun Shone Brighter,” already know that his smart, provocative scripts are often laced with humor, grounded in richly observed and impeccably researched detail, astutely and engrossingly topical.

But for Washington, Leon and Pasquale, “American Son” was a revelation, the work of a playwright with an important voice.

Responding to a few emailed questions, Washington says of Demos-Brown, “Chris has an extraordinary ear. He listens intently to not only what people say but how and why and when and where they say it.  And he is able to capture the essence of the truth that he witnesses and brings it forward as art.”

Of playing Kendra in “American Son,” she says, “Chris has written a beautifully complicated black mother in a moment of absolute crisis. Playing her every day is, without a doubt, the most challenging artistic challenge I have ever faced.  But it is a profound honor and a privilege.”

Pasquale believes that “American Son” is exactly where it belongs – and that Demos-Brown is too.

“This is exactly the kind of play that belongs on Broadway, especially when you have an open bigot sitting in the White House,” the actor says.  “When I read it, I was so moved. It’s about identity, family, love and race in the United States in 2018.”

Demos-Brown, he says, was “a surprise to me. I live in the playwriting capital of the world, and I know many of the best playwrights, and I didn’t know him. We have to figure out how to get him to close up his law practice and move here. He’s writing essential, brave, timely, important plays….This is a classic. We simply do not talk about race in America in a radically honest way.”

For the Tallahassee-raised Leon, “American Son” marks the 10th production he has directed on Broadway. He won his Tony for directing Denzel Washington in the 2014 revival of Lorraine Hansberry’s “A Raisin in the Sun,” is the founder of Atlanta’s True Colors Theatre Company and was formerly artistic director of that city’s Alliance Theatre.

“It was easy for me to decide to do this. I read it one time – usually, I read scripts five times,” Leon says. “It flows like 90 minutes of ‘Talley’s Folly.’ It has the poetry of ‘A Raisin in the Sun.’ It has the impact of [August Wilson’s] ‘Fences.’  It’s an important play. I think it will be around a long, long time….It’s timely now, and it will be timely 50 years from now.”

Part of the achievement of “American Son,” he adds, is in the way it encourages listening to different points of view.

“We don’t listen to each other in this country. In this wonderful play, you have four people who see the world differently, and they take a moment to listen,” he says. “He puts them in one world and has the audience lean forward, like we’re eavesdropping. My job as a director is to make sure the audience keeps leaning forward.”

Adds Washington, “I pray that we are all drawn to seek out more opportunities to listen and to be more open and understanding of views that differ from our own.”

Fernandez, the journalist-turned-producer, has seen other Demos-Brown plays but thinks “American Son” is special.

“I think we’re seeing the birth of a major American playwright,” he says.  “Chris’ writing is simple and straightforward, yet so evocative, so impactful.”

Demos-Brown’s journey to the cusp of Broadway success hasn’t been that of a man bent on becoming a famous playwright.

After graduating from Miami’s Killian High School, he earned a degree in Russian language and literature at Dartmouth. He tried his luck as an actor in Los Angeles for a couple of years, then came home to go to law school at the University of Miami, performing with the improv troupe Mental Floss while he was in school.  He and Stephanie met while both were working in the Miami-Dade State Attorney’s office, and they continue to practice law together – yes, even during “American Son” rehearsals and previews.

He has told different interviewers varying stories about the creative roots of “American Son,” but he mentions an idea for a controversial bumper sticker that one of his pals from Dartmouth had after the deaths of Philando Castile, Tamir Rice and Eric Garner at the hands of police. They and other friends debated it, and Demos-Brown found the debate so intriguing that he started putting the debate into the mouths of characters.

“This is the first play that I really built with mechanical dramatic building blocks,” he says. “I thought, ‘What would make for the most dramatically compelling situation?’ A couple that knows each other well. What if they’re a married couple? What would give me the most room to reveal the exposition in a deft way? What if they’re an estranged couple with a lot at stake over a son? I recall building the play around the axis of that relationship.”

Demos-Brown admits to dreams, yet as exciting as the journey of “American Son” has been, he tempers his thoughts of the future with realism.

“In a perfect world, I’d have a couple more Broadway plays before my career is over. I would get to write a screenplay or two. It would be wonderful to lead write a show,” he says. “I think part of what has carried me this far is that I’m ambitious, but I don’t have any set plans. I’m not just dying for the next thing to come along. If it comes, it comes. I would love to have a career in regional theater, have plays on Broadway and maybe have some go to London. That would be more than adequate for me.”