A Cumulative Power to Mad Cat Theatre’s ‘The Flick’ 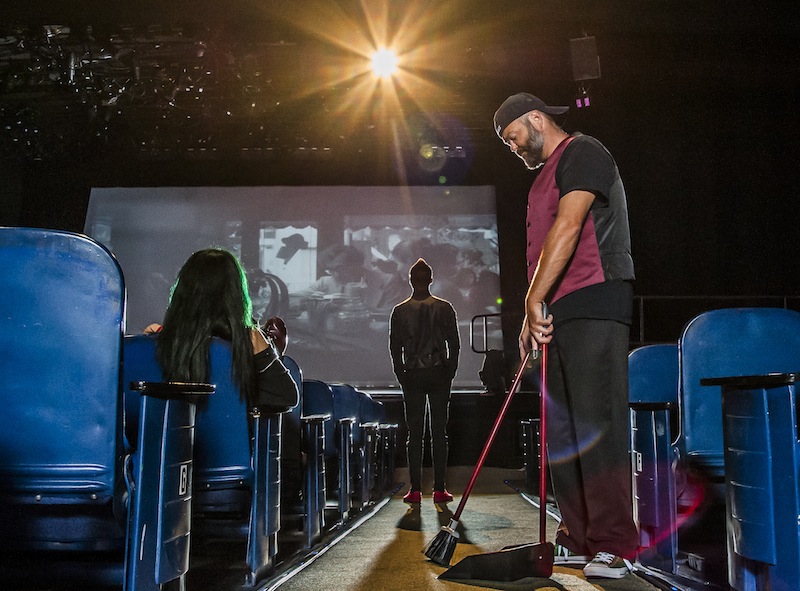 When Annie Baker’s The Flick won the Pulitzer Prize for drama in 2014, some stories about the high honor for a much-admired playwright made mention of a particular facet of the play: its length.

Set in a single-screen movie house in Massachusetts, The Flick is not one of those 90-minute, intermission-free dramas that mesh with our shrinking 21st century attention spans. Baker’s play runs a full three hours, some of that time filled with the mundane repetitive tasks of cleaning and operating a movie theater.

But watch and listen to Mad Cat Theatre’s new production of The Flick, and you’ll easily understand the play’s cumulative power.

In residence at Miami Theater Center in Miami Shores, Mad Cat is utilizing a rare asset in its site-specific production of the piece, much as MTC artistic director Stephanie Ansin did with her version of Tennessee Williams’ Out Cry earlier this season.

Built as a movie house in 1946, the former Shores Theater is both a space where plays get done and a vintage movie theater, now the home to O Cinema Miami Shores.

Mad Cat artistic director Paul Tei places the audience onstage and sets the action in what’s usually the seating area for movies and plays. So theatergoers watch as the actors sweep up the 330-seat space, scrub the floor between rows, dash up the stairs into the real projection booth and share conversations that gradually illuminate the lives of three “ordinary” people.

Those people are Sam (David Nail), a 35-year-old longtime employee who still lives with his parents and can’t seem to progress beyond his menial job; Avery (Chevi Marquise Hill), a brainy, opinionated black movie buff who’s on a break from college for personal reasons; and Rose (Jessica Farr), the hot projectionist who gets Sam’s fantasies going, despite his feeling that she’s most likely a lesbian.

As the three interact, their personalities come into sharper focus. Avery is struggling with depression. Sam feels stuck, and rightfully so. When Rose engages in self-reflection – though mostly she just charges her way through life – she wonders what’s wrong with her.

In The Flick, Baker touches on myriad subjects, including still-dependent adults, the realities of scraping by, peer pressure, ethical quandaries, sexual aggression, ingrained racism, the cost of “progress” and loneliness. Humor is woven through a script that, in a few instances, turns distinctly uncomfortable.

All three actors convey the complexities of their characters; Nail radiating stoicism, anger and despair; Farr coupling confidence with heedlessness; Hill (whose lines sometimes get muddied in the vastness of the auditorium space) painting the portrait of a young man undermined by self-torment. Erik Fabregat, a Mad Cat company member who’s been away from acting for some time, plays two small roles that are totally different in tone yet equally (and effectively) funny.

Just two downsides of the site-specific production of an absorbing play – and no, the running time isn’t really one of them. Because the space is so large, the subtleties of interactions among the actors are harder to catch in scenes staged toward the back of the regular audience chamber. And those onstage chairs where theatergoers sit? Not comfortable. Bring a cushion.